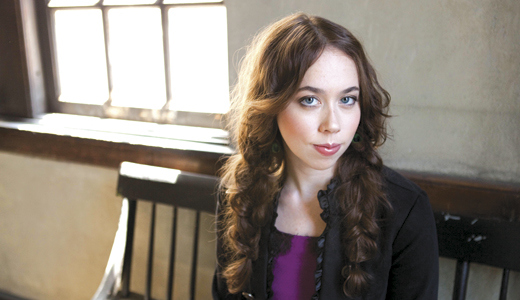 This Thursday, Oct. 30, the Grammy-nominated folk artists The Milk Carton Kids and Sarah Jarosz will be bringing their intimate retro-Americana sounds to the Kentucky Center for the Peforming Arts’ Bomhard Theater. I recently had an opportunity to discuss the origin of the relationship between these unique artists, among other things, with Sarah Jarosz.

LEO: I understand that you first played with The Milk Carton Kids at the Telluride Bluegrass Festival.

Sarah Jarosz: That’s where we first met; we didn’t actually get to play together that weekend. We met up there at the festival and hit it off immediately. We had heard each other’s music and were interested in trying to play together, so I invited those guys to open some shows for me in Texas the following November … which is crazy to think that that was a year ago. From the moment we first sang and played together, it felt really magical and we knew that it was something we wanted to do more of. That’s why we put this tour together.

LEO: In the videos I’ve seen of you and The Milk Carton Kids playing together, you all often gather bluegrass style around a large diaphragm condenser mic, which is a very honest and difficult sound to pull off. What was the concept behind this approach?

SJ: It’s interesting because this is the first time for me playing such a stripped-down acoustic show in front of the one mic which is really freeing and very true to the actual sounds of the instruments. The mic you see us using is built by Ear Trumpet Labs. The Milk Carton Kids have been using those for quite a while now. The intimacy of gathering around a microphone was something that was very important to this tour — gathering really close and not having monitors. Just having it be as true to the way you would play in a room just sitting around together; to try to recreate that feeling and sound was the goal.

LEO: In every video I’ve seen of you all playing together, Kenneth [Pattengale] has a handkerchief tied around the neck of his Martin. Has he told you or do you know why he does this?

SJ: He told me that initially when he would move his capo up past a certain fret the neck on his 1954 O-15 would start to buzz, so the handkerchief would quiet that. But now, I think that he’s done it so long that it’s one of those signature things that people see and know that it’s Kenneth Pattengale.

LEO: Sarah, I love the cohesiveness of your last album, the Grammy-nominated “Build Me Up From Bones.” It has a great flow and great variation, even though it follows a solid theme. I was very surprised and pleased to hear an excellent Dylan cover, so I have to ask of all the Dylan tunes to cover, why were you drawn to “Simple Twist of Fate.”

SJ: “Blood on the Tracks” is one of my favorite albums of all time. I was sitting backstage with Nat Smith before one of our shows, and we were talking about the album and that song in particular, and we kinda just played it for fun the first time, with Nat plucking out the melody in pizzicato, and sorta how you hear it on the record is pretty close to how we played it. When I’m choosing to do a cover for an album, I’m looking to bring something to the table that is different than what my songs offer, and texturally I thought it was nice to have something so stripped down and stark — just my voice and cello.

LEO: I know that the Milk Carton Kids have been through town before, but I wasn’t sure if you’ve ever played here.

SJ: My first time in Louisville was actually way back when the International Bluegrass Music Association “World of Bluegrass” was at the Galt House. I think I was 12 years old and [I] have fond memories associated with the city just from that.

LEO: How long have you been playing with Alex Hargreaves (fiddle) and Nathaniel Smith (cello)?

SJ: About four and a half, going on five years. Before that I played music with Samson Grisman, who[m] I met at the RockyGrass Festival in Lyons, Colorado. All of us have been friends for a long time; we were all young and into the same music and would see each other every summer at these camps and festivals. So when I started playing my own songs and booking my own gigs, I called these guys up and asked them if they would like to play with me … and it’s blossomed into a really great thing.

LEO: So did your parents drag you around to these festivals?

SJ: I started playing the mandolin around 10 years old, and my dad saw that I was getting into the bluegrass and folk music. Fortunately, the first music camp he saw on the Internet was RockyGrass and that was the first camp I went to when I was 11 years old, and it was there that I was able to meet David Grisman and Pete Wernick. Pete put together a youth group for IBMA, which was the group I was with when I first came to Louisville. It was all very natural; one thing would lead to the next. I would find out about another festival or camp and before I knew it, it was just my life!