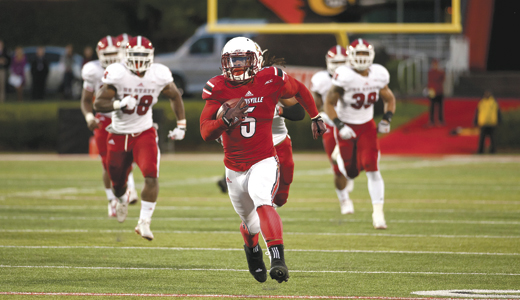 It would take a pretty good leap of the imagination to envision a scenario in which Louisville could upset Florida State Thursday night at Papa John’s Cardinal Stadium — as it would any time an unranked college football team takes on a defending national champion that is undefeated (7–0) and ranked No. 2 — thinking it ought to be No. 1.

But it isn’t hard to see that Louisville is a good team getting better.

Louisville won its last game to run its record to 6–2, and stands 4–2 in the Atlantic Coast Conference. But it was a close loss to Clemson the previous week that provided the best signal the Cardinals might be coming on.

That game ended at the 1-yard line, with Louisville flubbing a chance to notch a significant upset victory — which might not sound so good. It might be another moral victory at some schools, but Louisville coach Bobby Petrino calls his team “a work in progress,” and saw something he liked in one that got away.

“The hardest thing about those losses,” says Petrino, including Louisville’s other defeat, at Virginia, “is you’re in a position to win the game, and there’s a number of things that transpired during the game that obviously affects that. There’s a couple easy things that could have made a difference prior to the last drive.

“But we maintained our poise; you can’t say enough about how hard we fought. We got the ball with a minute some left to go, and we had to burn all our timeouts to get it. Our defense came up with a great stop on third down to force them to kick a field goal, and all our players took the field believing we would go out there and find a way to win the game — and it almost happened. I think that’s a step forward from Virginia, where we got the ball late and couldn’t move at all.”

A week after the Clemson defeat, Louisville controlled the clock — and its destiny — beating North Carolina State 30–18 to set up a shot at the big Indian in the teepee, Florida State.

The last time this situation came up, in 2002, a hurricane rode up from the Gulf of Mexico and stopped, dropping about a billion gallons of rain on the game, and Louisville beat No. 4-ranked Florida State 26–20 in overtime. Florida State coach Bobby Bowden said he’d never come back to Louisville again, and he didn’t. But his successor will, and the Seminoles Jimbo Fisher is bringing are better than the bunch Louisville drowned 12 years ago.

Meanwhile, back in the present, it’s interesting about that end-of-game stuff — and the way Louisville depends on its defense. Statistically, Louisville leads the country in defense. And maybe stylistically, as well. The defensive Cardinals step confidently onto the field, and stride with pride coming off. One thing you’ll notice is that Petrino doesn’t mind taking chances with his undependable offense because he knows if his runners and throwers can’t hang onto the ball, his defenders can get it right back. Three and out. Calling time-outs with the clock ticking down. That’s pretty impressive. Safety Gerod Holliman leads the nation with eight interceptions. But the reason he and the other defensive backs can go prospecting for picks is that opponents can’t run on the Louisville guys up front. They have to pass.

Still, everyone knows Louisville’s offense needs to catch up to its defense if it is going to defeat teams like Clemson, Notre Dame — and yes, Florida State. There’s an old maxim that insists that defense wins ball games. But it’s an old maxim. College football has become a wide-open scoring bacchanal, and just having a good defense is no longer enough to win. This isn’t Centre upsetting Harvard 6–0. Or Pittsburgh’s Dream Backfield playing to a 0–0 tie two years in a row against Fordham’s Seven Blocks of Granite. Today, it’s Score, Baby, Score — and Louisville is one of the schools that made it like that.

And don’t be too dismayed with the slow development of Louisville’s offense, cautions Jim Knoer, who often provides insightful analysis in this space.

“It takes time,” says Knoer, noting that Louisville began this season with a new coaching staff, a new offense and a new quarterback.

“Every coach has different blocking schemes, and the offensive line has to do things in a whole new way,” Knoer explains. “It might sound like a little thing, but if you’ve been blocking maybe like this” — he slants to his left, coming off an imaginary snap — “and now you’re blocking like this, maybe straight on. It takes time to learn and get everything timed perfectly. You remember all those illegal procedure penalties Louisville was getting flagged for earlier — jumping offside, all that stuff? Well, last week against North Carolina State, those penalties were gone. They’re getting it.

“The good thing,” adds Knoer, “is Bobby Petrino is a great offensive coach, and you know he’ll get those things ironed out. They’ll come to the point where they’re making all the great plays Petrino is calling.”

Our expert also predicts Petrino will create a special role for freshman quarterback Reggie Bonnafon, who can run. “I’m sure Petrino right now is thinking up a special ‘package’ of plays to bring Bonnafon in to shake things up in the game,” Knoer says.

And don’t forget the defense. Maybe defenses can’t win games all by themselves, but they can certainly tip the balance in close games.

Which might be just what Louisville needs to shock Florida State — a sudden, unexpected big play that shifts the course of events.

Or are we just dreaming?