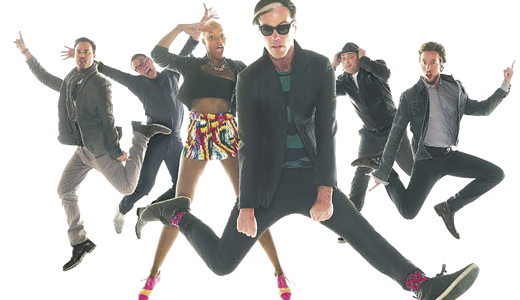 When Fitz and the Tantrums arrives at Mercury Ballroom for its November 3 show, chances are the six band members won’t be caught off guard the way they were when headlining opportunities started coming their way not that long after the August 2010 release of the band’s debut album, “Pickin’ Up the Pieces.”

“Things kind of accelerated for us so fast at the beginning that we literally didn’t even have enough material to play a headline show,” singer/keyboardist Mike “Fitz” Fitzpatrick said in a recent phone interview. “So we had to, like, write a few more songs, get creative with some unique covers, and it was definitely … all hands on deck to get it done.”

What’s providing the comfort for the band, of course, is the presence of what has become a popular second album, “More Than Just a Dream,” which changes the game when it comes to the live show.

“I think we’re all very excited to showcase these new songs from the new record and have the real body of work that we can change up our set from night to night,” Fitzpatrick said.

The live chemistry of the group has been apparent from the day the band members first played together, according to Fitzpatrick. He began putting together the band in 2008, after he wrote the song “Breakin’ the Chains of Love” on a newly purchased Conn electric organ.

“We had one rehearsal, and the chemistry was there from the first performance of the first song,” Fitzgerald said. “I left the rehearsal space and went and booked us a show because I could tell [we clicked].”

The rocking soul sound Fitz and the Tantrums created on “Pickin’ Up the Pieces” connected with audiences. While not a huge hit on the charts, the single “Moneygrabber” did reasonably well on the radio, going top 30 on Billboard magazine’s Hot Rock and Adult Pop charts.

With “More Than Just a Dream,” the group not only wanted to better capture its live energy — extensive touring behind “Pickin’ Up the Pieces” was also a major factor in building the band’s fan base — Fitzpatrick said the band also wanted to push its sound further than on the debut album.

“We knew that we wanted to make a bold record,” he said. “It felt like if we had just gone and made ‘Picking Up The Pieces Part 2,’ it would have been a very safe thing and then people would have chastised us for just making the same record again.”

Fitzpatrick and his bandmates have reason to be proud of “More Than Just a Dream.” The songs are more diverse, cohesive and, rooted in retro sounds, have more of a forward-looking quality. They range from the percolating soul-pop of “Out of My League” (a single that recently topped Billboard’s Alternative Rock chart) to the bubblegum soul of the bouncy “The Walker” (a whistled melody is a focus of this second No. 1 Alternative Rock single). The group’s knack for buoyant pop melodies is also apparent on songs like “Spark,” “Break the Walls” and “Fool’s Gold” (which sounds like a lost Hall & Oates hit, thanks in part to Fitzpatrick’s voice, which resembles that of Daryl Hall). Meanwhile, the band builds in some nice changes of pace with the mid-tempo “6AM” and “Keepin’ Our Eyes Out,” which moves smoothly between perky piano melody and epic pop sections.

“I couldn’t be more happy or proud of the boldness, the chances,” Fitzpatrick said of  “More Than Just a Dream.” “They kept me up at night, the risks we were taking, but that let me know that we were, like, challenging ourselves as artists. That was maybe one of the most important things to me.”