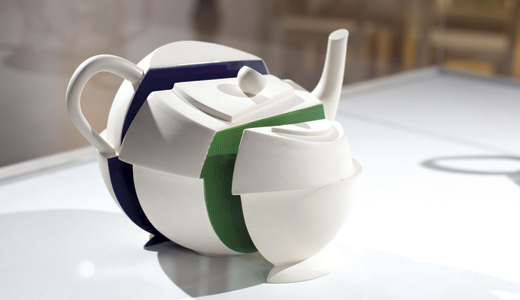 On my way to the Kentucky Museum of Art and Craft to see “Ritual & Residue: The Art of Drink,” I heard “Raise Your Glass” by Pink on the radio. How fitting and perfectly timed — a rowdy song about the joys of communal drinking. It continued playing in my head, becoming the exhibition’s soundtrack as I walked through it.

Beer, tea and bourbon are the drinks of choice in these parts. What we use to sip them from can give insight into history, ritual and culture.

A 1906 wall quote by Lt. General S. B. Buckner Jr. sums up just what it takes to down a beverage. “It is ceremony and must be performed by a (gentleman) possessing a true sense of the artistic, a deep reverence for the ingredients and a proper appreciation of the occasion. It is a rite that must not be entrusted to a novice, a statistician nor a Yankee.” And you thought it was about thirst.

Let’s start with bourbon. Two examples illustrate Kentucky’s long tradition with the silver mint julep cup. John Kitts, working in Louisville in the mid-1800s, made one of coin silver. It’s located beside modern examples designed by Mark J. Scearce for President Obama. The shape and use are basically the same.

But who says containers have to look a certain way? Nontraditional shapes are a big part of this exhibition.

I’m infatuated with the tea sets by Peter Saenger. The bulbous “Design II Set” came about because Saenger considers himself a sculptor first, mold-maker second and potter third. The mugs are swished up and under the teapot like kittens nursing. Turns out “Star Trek: The Next Generation” thought it futuristic-looking enough to serve Capt. Picard his Earl Grey tea.

Dante Marioni is a master in glass, with his tall “Suite of Three Vessels” a good example of why he can be called that. They resemble Greek wine vessels that have been stretched, with yellow bodies and red accents highlighting the elongation. Made for the gods on Mt. Olympus, perhaps?

Halloween is just the time to see a teapot in the shape of a skull — better yet, ceramic pyramid-shaped skulls as crafted by Richard Notkin.

A number of unusable containers are grouped together, including Marek Cecula’s ceramic “Fragment Series Teapot.” His take on the teapot reminds me of Meret Oppenheim’s iconic “Object” of a fur-lined cup, saucer and spoon. The works lead the way to yet another discussion about utility vs. object.

I’m sure there’s a country song about what happens after the beer is gone. Paul Villinski knows; he transforms discarded aluminum cans into butterflies. “Memo (Clouds)” shows the metal butterflies pinned to the wall as though specimens in a lab, while “Hypothesis” is a wire construction with the butterflies attached.

Programming associated with the exhibition lets you get your drink on. KMAC is offering afternoon tea on October 30 and November 2, as well as a Japanese tea ceremony on November 1. If you’re interested in seeing the art of silversmithing, Joseph Schmidlin will be conducting demonstrations on October 18.

The third floor is showing Lloyd “Hog” Mattingly’s shrunken historic village of Lebanon Junction, Kentucky. His loving architectural interpretation of his hometown as it was when he was young adds to the camaraderie felt in “Ritual & Residue.” Pink was right.