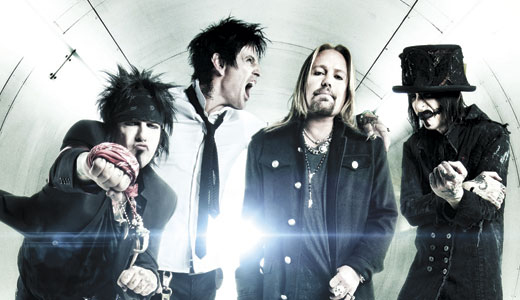 Tommy Lee might sound a bit morbid when he says he wants each show on the final tour with his band, Motley Crue, to be like a wake.It’s not as gloomy as it may sound – even though fans may be a little teary eyed in saying goodbye to Motley Crue after sharing in 30-plus years of music, mischief, mayhem and everything else a rebellious, good-time rock band is supposed to represent.

“I always thought it was weird and cool; there’s something very bizarre about going to a wake,” Lee said in a recent phone interview. “I still find it so odd that after somebody’s funeral, there’s that thing where everybody gets together and has drinks and celebrates and parties.  And you’re like this is fucking weird. But there’s something real cool about it (too) because everybody’s celebrating a life and death simultaneously, the beginning of something new and the end of something old. So I think we’ve figured out that’s how we want this to play out, much like a happy funeral, a celebration.”

A press conference at which the band announced that this would be the final Motley Crue tour hinted at the vibe the group wants to create. The four members – drummer Lee, singer Vince Neil, guitarist Mick Mars and bassist Nikki Sixx – arrived at the press conference in a hearse, with a New Orleans-style band playing the festive music one hears during a Crescent City funeral procession. Inside, the band members took their appointed seats with their names on faux-tombstones in front of them.

Lee said the shows will take that tongue-in-cheek attitude and turn it up to 11.

“I think that’s one of the awesome things about Motley Crue. I think people can blindly go buy a ticket knowing full well when they get there they’re gong to be like ‘Holy shit, that was insane,’” Lee said.

“And I think that’s cool. That’s one of the things that fans will probably miss because not a lot of guys in bands put on shows like we do, not very many that I know of. Just know that it will be mind blowing. That’s for sure.”

The group has done its best to assure fans that the final tour is exactly what it says – even signing a binding legal document at the press conference in which the four band members agreed there will be no further tours in any form as Motley Crue.

Lee said the group created the document to convince people that it really is the last tour – not just the common farewell tour that becomes a farewell-for-now outing.

“I can just tell you right now, people are going to say ‘Ah, they’ll be back,” he said. “And we cannot use the word farewell because that word has just go stink all over it. Too many people have ruined that. So we need to call this something other than a farewell tour. This has got to be called the final tour. And what can we do to prove and to make sure that people believe us? We need to come up with something we can all sign or something we can do that show that this is it. And we came up with that (legal document).”

The announcement that Motley Crue would end with the final tour may have seemed sudden, and considering the group’s continued popularity, unexpected. But the decision didn’t happen overnight.

“This is definitely not something new. We’ve been talking about this for years,” Lee said. “We would constantly ask each other how do we want to, you know, end this thing? I know how we don’t want to end it.

We don’t want to end it with one or two guys still out there touring with two other hired guys. That’s just not how we ever envisioned it – ever. And so to prevent that, before anything bad could happen – Jesus Christ, we’re all still alive and everyone’s healthy – maybe now is a good time.“

The advancing age of the band members, who are in their 50s, was a small factor in the decision – as were concerns about the health of Mars, who suffers from an arthritic condition, ankylosing spondylitis, which affects mainly the spine and pelvis.

“Mick will sit there all day long and tell you he’s fine. And he is. I mean, he really is. But the truth is this tour will be a long tour,” Lee said. “I’m totally healthy, and I’ll be fucking beat up and tired as hell after this. And Mick does have a spinal disease and it takes a toll on him. So I would say it factors in slightly.”

The final tour, which band members say could last for upwards of two years as it goes worldwide, will close the book on a career that has seen plenty of ups and downs, debauchery that reached legendary levels and plenty of fun songs that helped launch the so-called hair metal movement of the 1980s. The exploits were chronicled in the book “The Dirt,” which after a number of delays, is now set to be made into a movie, with Jeff Tremaine directing.

The Motley Crue story starts in 1981, when the band self-released debut album, “Too Fast For Love,” selling 40,000 copies of the album, according to the band members. Signed to Elektra Records after that, the group broke through commercially with the 1983 album, “Shout at the Devil,” and then reeled off three more consecutive hit albums, “Theatre of Pain” (1985), “Girls, Girls, Girls” (1987) and “Dr. Feelgood” (1989). In all, the band has sold more than 75 million copies of its nine albums.

The group took advantage of its success, partying like true rock stars and boasting of numerous sexual escapades. But all was not fun and games.

In 1984, Neil was driving when he had a head-on crash that killed his passenger, Nicholas “Razzle” Dingley, drummer of the band Hanoi Rocks. In 1987, Sixx suffered a heroin overdose that left him legally dead on the way to the hospital before medical personnel were able to revive him.

There was also plenty of conflict between band members at various points. Neil quit in 1992, then rejoined the group in the late 1990s after his solo career never took wing, only to be booted again in 2002, after which the group broke up entirely for a couple of years.

Lee also had his problems with the group, leaving Motley Crue in 1999, and forming his own band, Methods Of Mayhem, before rejoining when the band as a whole reunited in 2004.

The group, though, managed to pull together for several successful tours that led up to the making of the 2008 studio album, “Saints of Los Angeles,” which was widely praised as a return to musical form for the band.

So Motley Crue figures to end its career on a high note, trying to make each show as memorable as possible.

At this point, Lee isn’t sure how he’ll feel when the last show arrives or what he’ll miss most about Motley Crue. That’s something he said he’ll only know when that day comes.

“There will be a bunch of things that we’ll miss, but I think by the end of the tour, I don’t know maybe I’ll have a whole different perspective on a lot of things,” he said. “I’ll probably have a ton of stuff (I’ll miss). It will probably be highly emotional, I’m sure.”