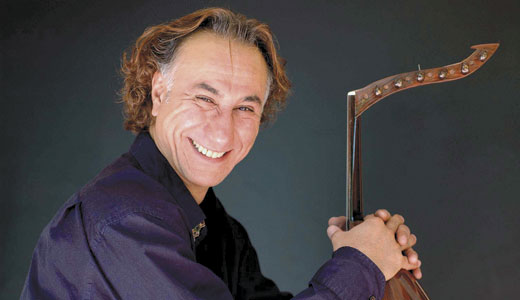 The Clifton Center is hosting a Festival of Iraqi Culture, culminating in a concert by oud master Rahim AlHaj. Born in Iraq, AlHaj now lives in Albuquerque, N.M., and became a U.S. citizen in 2008. In fact, under the regime of Saddam Hussein, he was twice imprisoned for his musical and political activism. AlHaj has released several albums, including a 2013 retrospective collection, Journey. Indeed, his life has been a journey, both literally, as he left Iraq for political asylum in the United States, and musically, as reflected in the variety of his compositions and accompanists (ranging from traditional percussion to jazz guitarist Bill Frisell, and more). He has received two Grammy nominations. His instrument, the oud, is a cousin of the lute, with a smaller neck and no frets. It is considered an ancestor of the guitar. His biography states that AlHaj became entranced with the oud as a young child. In a recent telephone interview, LEO delved deeper, asking what made him connect so strongly with this instrument.

“The first time I saw the oud,” AlHaj explained, “I was in second grade. My teacher, an Arabic teacher, not a music teacher, was playing for us. I was utterly mesmerized. The sound of it captured my feeling, my thought, my whole being, basically. That’s why I felt this instrument is equal to my being. Now I find that I mesmerize myself when I am [playing]. I said, ‘I guess you don’t have a choice, you have to be an example of your art.’ I guess that’s what happened when I was a kid. My teacher played a fantastic role. A teacher (in our culture) is like a god, ‘you can’t talk to me, you can’t look at me in the eye.’ So, when he gave me this oud, that was like he was honoring me and he believed in me, that you’re going to make it, that you’re going to be a musician. All I knew was, I really need to play this instrument.”

AlHaj spoke of his style of playing. To do this, he first explained that there are different schools of oud playing, noting that it is a relatively recent historical development for the oud to be featured as a solo instrument. He likened the compositional organization of oud music, the maqam, to modal composition in western music. “For my generation, or the generation before me, Munir Bashir is considered a legend of oud playing in the 20th century. He established the school of oud as a solo instrument, with a different style and concept. So my playing is like a picture. When you have an original piece of painting, you’re always thinking, you have the same colors, the same aspect, you have one theme. So I try to make my compositions like paintings. My compositions are about children, war, woman, tragedy. So I’m trying to bring a lot of color to make the audience capture this color in my playing, which is my goal — a music to understand.

“So when I compose, for example, for string quartet or for symphony, orchestra or guitar quartet or even solo, it has the same color I put in my canvas, which is the piece I’m trying to achieve. I moved from one genre to another  – not really! Because I believe in music, anyway. I do not believe that the structure of music, this is jazz, this is [another style]. We talk about the feeling, the color, again, the communication.”

Following up on his reference to Frisell and jazz, AlHaj spoke of the interplay in his own music between composition and improvisation. “It depends on the composition, and the group I’m playing with. There are some compositions I play from beginning to end with not one note of improvisation. On others, I extend the composition. For example, if I play with a string quartet, there is written music, and you have to be a slave to the note,” he said laughing. AlHaj also discussed his live repertoire, saying that when he comes to Louisville, he will be accompanied by a percussionist, who will play dumbek (sometimes called a “goblet drum,” for its shape), hand drum and riq (similar to a tambourine).

He closed by saying, “I will be playing both traditional and original music because I want to give the audience a chance to hear the difference between one school and another. This will be my first time in Louisville, so this is really exciting for me.”