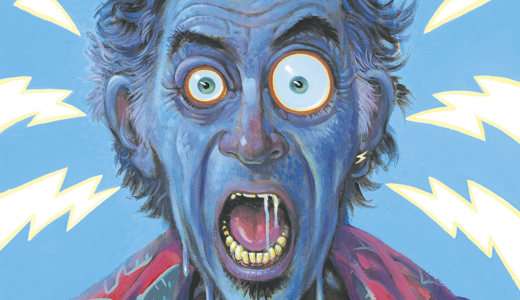 If there is one person other than Dan O’Bannon who was as involved in the majority of creative processes that led to the making of “The Return of the Living Dead,” it is William Stout. Stout was a phenomenal artist years before he even got involved in film, but when he came on board for “The Return of the Living Dead,” he was the youngest production designer in film history.

Stout has done everything from designing movie posters to creating creatures onscreen, from writing screenplays to heading up the art department on a number of films. He has worked with everyone from Roger Corman to Jim Henson, from John McTiernan to Frank Darabont, from Guillermo del Toro to Christopher Nolan. Stout has had, and continues to have, a remarkable career. In a phone interview, he shared his thoughts with LEO about working on “The Return of the Living Dead” and the movie’s impact on the horror genre.

LEO: How did you initially become involved with “The Return of the Living Dead”? Had it already changed hands from John Russo and crew and moved to Dan O’Bannon?

William Stout: John Russo got the rights from George Romero to do a “Living Dead” film. As far as I know — and I could be wrong — he was never considered to direct it. Russo was paid for the use of the “Living Dead” name, then Dan O’Bannon wrote the screenplay to “The Return of the Living Dead.” The film was originally supposed to be directed by Tobe Hooper. When Tobe dropped out, O’Bannon took over as director.

I knew Dan from meeting him at several parties thrown by Ron Cobb. I was working with Ron designing “Conan the Barbarian.” Ron and Dan had been friends for years. I often brought current non-Conan art projects or jobs to Ron’s parties to get feedback from Cobb’s guests. Dan always paid close attention to whatever I brought. I didn’t know it at the time, but he was already considering me for “Return of the Living Dead.” He knew I could handle the zombies; he just wasn’t sure I could design the film’s high-tech stuff. One evening I brought in a comic book cover I had drawn for “Alien Worlds.” It featured an astronaut sinking into the ground. Later, Dan told me that when he looked at the high-tech astronaut suit he thought, “Ah-HA! Stout can do high-tech!”

Once he became the director, O’Bannon gave our line producer, Graham Henderson, a very short list of whom he wanted as his production designer. Dan didn’t want a traditional production designer. He wanted someone with a comic book background. Dan’s list was short: Bernie Wrightson and me.

Graham did his homework and quickly discovered that Bernie, Dan’s first choice, didn’t have any film experience but that I did. He called me and cut a deal, then lied to Dan that Bernie had passed on the film. I began work on “Return of the Living Dead” almost immediately, working very closely with Dan.

LEO: For people who don’t know, what exactly does the title “production designer” entail?

WS: The production designer is the eyes of the director. He is responsible for everything you see on the screen except for the performances of the actors (although I provide things that will hopefully enhance and inspire their performances, too). So, I’m in charge of the sets, special effects, makeup, special effects makeup, props, set decoration and costumes. I typically have about 1,200 people working under me. The title was created for William Cameron Menzies for his role in creating “Gone with the Wind.” Before that, they were called “art directors.” Now, art directors work for the production designer. An art director does all of my budgeting and scheduling for me, giving me more time to focus on the film’s design.

LEO: And did what you ended up doing on “Return of the Living Dead” differ from the traditional production designer job?

WS: Not really, except that there are three types of production designers: those that can draw (like me); those with architectural and art director backgrounds; and cut-and-paste guys. These are guys that can’t draw but instead make collages and oversee illustrators to express what they think the film should look like.

I’m unusual in that I’m a very hands-on production designer. I’m on the set every day, making sure that every last visual detail and color is just the way I and the director want it. I was under the Half Corpse’s gurney, for example, making her spine flop around and ooze spinal fluid.

WS: Yes; my girlfriend at the time was a big fan of that movie.

LEO: And probably “Dawn of the Dead” as well.

WS: I saw its very first public screening, at [Los Angeles festival] Filmex. Uncut, by the way — very long. I’m sure it didn’t, but it seemed like it ran about three hours.

LEO: So what did you set out to do that was different from those two films that had arguably created the zombie genre?

WS: Ours was the first zombie film to have fast zombies. You can outrun Romero’s zombies — but not ours. Ours was also the first film in which brain-eating was crucial to the zombies’ “life” and existence. Plus, we were determined to have what O’Bannon called “principal corpses” — very distinctive zombies visually, not just guys with dark rings around their eyes. The Tarman is a good example of one of our “principal corpses.” He’s unique in the annals of zombie film history, a real star on his own.

LEO: Romero’s “Day of the Dead” must have been in pre-production and then shooting around the same time. Was there a sense of competition with what they were doing on that film?

WS: Not at all. We were completely unaware of Romero’s “Day of the Dead.” We were totally focused on our own zombie flick and making it as good as we could possibly make it, given the restraints of our budget. And neither Dan nor I wanted to make a zombie movie similar to any of the Romero films. We had our own vision and stuck to it.

LEO: And I would assume had the story continued from the Romero/Russo point of view, it would have still been set in Pittsburgh. So how did the setting of the “Return” plotline end up being set in Louisville?

WS: I have no idea. That was something Dan came up with, but I don’t know why. The two of us did promote the film in Louisville. In fact, that’s the only city we visited to promote our movie, even though we never actually shot anything there — although many of the locals think we did!

LEO: You have a connection to Louisville, don’t you?

WS: Yes; my wife is from Louisville, Kentucky. She was Kentucky’s Junior Miss and a talented actress.

LEO: Do you think Dan knew that, and worked it in because of that?

WS: No. I don’t think that Dan had even met my wife until after he had written “Return.”

LEO: “Return of the Living Dead,” to me, had a very different feeling then most other horror movies, especially at the time. What made it so different to you?

WS: We were trying to create a real rarity in cinema: a film that is both really funny and really scary. I can think of only a small handful of films that have pulled that off — “Abbott and Costello Meet Frankenstein” is the first that springs to mind. It accomplishes both because the horror is played straight in that film — like we did in ours.