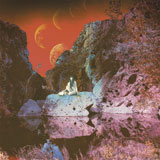 The release of “Primitive and Deadly” sees the ambient metal titans Earth undergo another sea change, albeit one comparably less drastic than in the past. Where their earliest material was a drone metal blur, “Hex; or Printing in the Infernal Method” saw the band drift into monolithic western, like Sergio Leone weaned on Black Sabbath sans distortion. Of course, “Primitive and Deadly” isn’t shy about laying it on thick, again including fuzz and distortion into Earth’s tonal palette, this time without any added instrumentation like the Fender Rhodes or cellos that have marked their last several records. Again, Earth frontman Dylan Carlson explores feedback-drenched, crushingly slow riffs filtered here through the lens of the band’s recent work. It’s worth noting the rare occurrence of vocals throughout the record’s tracks, which play like bygone grunge anthems with Earth lumbering on in the background.