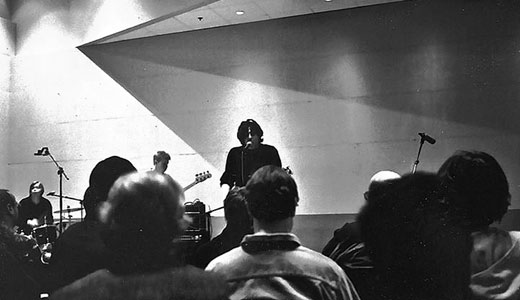 After three decades in the music business, Paul Kopasz has a lot of stories to share.  Some of them are fun, like the first time he toured Europe. Others are sad, funny or just plain gross; Kopasz says audiences tend to prefer the hilarious or gross ones. “It used to bother me when my friend Townes Van Zandt would talk between songs,” he admits. “I thought he was holding up the performance. But now I realize it was a palate cleaner, like a chef passing out appetizers between courses. A lot of Townes’ songs were dark and depressing, so he had to break it up so the audience didn’t get overloaded. I don’t think my songs are so dark and heavy, but a lot of people do.”

Kopasz’s music runs the gamut from soft, literate folk rock to all-out jams. He estimates that he’s written more than 5,000 songs, but he picks from a batch of about 200 tunes for his live shows. Kopasz will be at the Decca Restaurant on Saturday, Oct. 4 at 8 p.m. He promises a mix of new and old songs. “The first song I ever wrote was called ‘Poor Man’s Eyes,’” he says. “I will definitely be doing it at Decca. It’s a killer song.”

The 52-year-old Detroit native started writing songs when he was in high school. In the early ‘80s, he moved to Lexington to attend the University of Kentucky on a debate scholarship. But academia didn’t suit him. Kopasz ended up in New York City, crashing in an apartment with a bunch of jazz musicians. One of his roommates was none other than jazz legend Jaco Pastorius, bassist for Weather Report.

The older musicians treated Kopasz, a little punk rock kid, like an errand boy. They sent him to Brooklyn to pick up their drugs. But after hearing some of his early songs, they came to respect him enough to let him use their recording equipment to make demos. In 1984, he returned to Lexington with a batch of finished songs and a drug charge hanging over his head.

Kopasz was charged with possession of heroin and faced up to 45 years in prison. To get his mind off the case, he formed Paul K and the Weathermen, with drummer Tim Welch (Red Fly Nation, Lily Pons). The group hastily recorded 30 songs and released them on cassette because Kopasz didn’t know how long he’d be a free man.

“The tests came back and what I had turned out to be hash oil, not heroin,” Kopasz remembers. “I was able to get out of the legal trouble by giving the prosecutor information on one of my friends. The whole deal would have fallen apart if they knew he was dead and I played at his funeral. It never came up.”

Kopasz’s cassette-only releases drew the attention of the Dutch label SilenZ. He recorded “The Big Nowhere” and “The Killer in the Rain” for the label. The records sold well in Europe, which led to a tour with Alex Chilton and country singer-songwriter Van Zandt. Van Zandt became a friend and mentor. At one point, Kopasz lived with him and drove the older man’s kids to school.

Kopasz said he was done with drugs after his possession case, but he played up the outlaw image because he wanted to imitate Van Zandt. Now it’s an albatross around his neck. “I’m actually more stable than I’ve been in a while,” he says. “I’m happily married, playing a lot, and I put all my bad habits behind me. But in a lot of ways, I’m still living down my 20s. People think I’m the patron saint of junkies. At one of my shows recently, a guy asked me for a clean needle. He looked offended when I didn’t have one.”

The highlight of Kopasz’s career was 1997’s “Love is a Gas,” which was produced by Velvet Underground drummer Maureen Tucker. He had met her after learning that Tucker admired one of his songs, “Sterling Morrison’s Blues,” named for another Velvets member. When he read in a music magazine that Tucker intended to focus on producing rather than performing, Kopasz gave her a call.

The financial realities of the modern music business led Kopasz to disband and stop dealing with backup bands. He usually performs solo on guitar or with an accompanist. At Decca, he’ll play with guitarist Mark Hamilton of the Billy Goat Strut Revue. Kopasz says he prefers to keep things simple.

“My biggest problem right now is remembering all the words to the songs,” he says. “My wife asked me a while ago if I should be practicing for the Decca show. I told her I was practicing, trying to remember lyrics. I’m getting old. The memory is the first thing to go.”