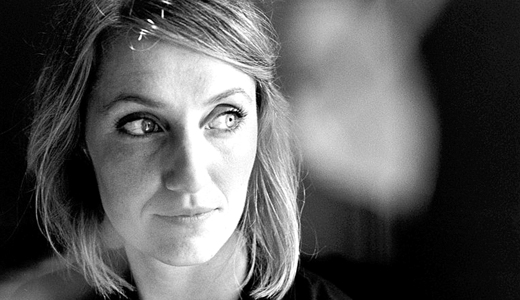 Joan Shelley is about to come back home after some touring for her latest album, “Electric Ursa,” which has received tremendous reviews from the likes of Pitchfork. At Zanzabar, on Friday, Oct. 24, she’ll be trading in her stripped-down road ensemble for her full band. But however and wherever you can find her — solo or in collaboration, live or on record — give her your full attention. Or rather, watch as she grabs it with tracks and performances where stark elements come together with a rare richness.

One clue toward appreciating Shelley is found in something rather old-fashioned these days — the packaging of her concise new collection. In a nod to how a previous generation’s record stores would bring listeners closer to the experience of singer-songwriters making albums, a black-and-white photo taking up the inside of the gatefold shows band members coming together to huddle behind engineer Kevin Ratterman, listening to playback.

The image evokes the comfort of a safe space, the sort where one could share the most intimate tones and lyrics describing family and nature, devotion and loss. We reached out to Shelley and found her on a Pennsylvania highway between gigs. When not distracted by a double rainbow on the horizon, she answered a few questions about her solo recordings and also her Kentucky all-star trio Maiden Radio (with Julia Purcell and Cheyenne Mize).

LEO: How do you characterize the difference between the recording experience for your previous album, “Ginkgo,” to the one that yielded “Electric Ursa”?

Joan Shelley: I worked with the same recording engineer — Kevin Ratterman. So that’s been a constant. He’s a wonderful person and a really positive force in the studio. We put together a band the week before “Gingko,” and then worked up the arrangements together in an intensive week. But this time, it was formed after touring with the band. After we had played some shows, we came back with our songs arranged from live performances. That was probably the biggest difference.

LEO: How did the instrumental track (“Remedios”) come about? Did that have words that weren’t used?

JS: That song came together when I was locked in a house in England and couldn’t leave for the day. So it’s sort of a lullaby. I liked the soothing quality of that and didn’t think it needed any words.

JS: We have plans for January to record another set of songs with some friends up in Michigan.

LEO: Are you writing with them in mind?

JS: Yes, some songs are definitely leaning toward the Maiden Radio aesthetic. So we have those new songs, but mostly we try to stay “traditional-centric.”

LEO: Are you bringing in traditional songs for your own recent shows?

JS: [Touring accompanist] Jonathan Wood and I have been singing one traditional song. They clear the air for me — and they get people engaged. I just like a capella songs to get the point across, and my point being very much vocal over my guitar playing. It’s powerful, powerful — I don’t know what they bring in, but I think it’s something positive.