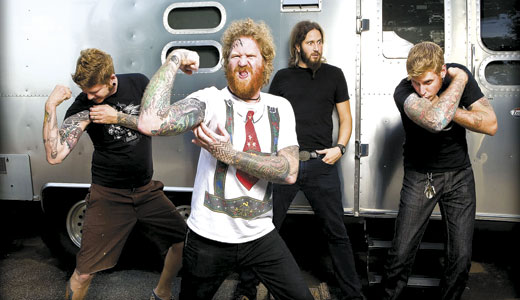 Fearlessly crossing boundaries of all sorts in rock’s heaviest zones: that’s been Mastodon’s history. In 15 years of recording, the Atlanta quartet has delivered many tracks that careen between stoner sludge and melodic, Thin Lizzy-style twin-guitar arrangements. Drummer Brann Dailor is always ready to subvert his own rhythmic structures — the stops and starts open new, compelling doors at every turn. And when the band puts out new music, you never know whether it’ll be an album following a cosmic storyline or a brace of songs that reveals thematic threads only after repeat listens. For instance, material early in their career referenced the historical “Elephant Man” Joseph Merrick and alluded to the suicide of Dailor’s sister.

On Saturday, Oct. 4, Mastodon plays Louder Than Life at Champions Park. LEO recently spoke with the drummer about the band’s modus operandi in the studio and on the road. And in a serendipitous twist that aligns with the gourmet food-and-drink aspects of the festival, we had something else to talk about: Mastodon has joined forces with a boutique coffee company for a limited-edition blend featuring beans aged in whiskey barrels.

Brann Dailor: I like different songs for different reasons. I like “March of the Fire Ants,” which is always technically a tough song to play. It’s got a lot of moments that I guess I’m proud of — playing over the bar and lots of interesting drum fills. Then there’s stuff like “The Czar,” which provides more of an emotional high based on the [lyrical] subject matter.

LEO: Storytelling is obviously a big part of Mastodon. How’d that process get going?

BD: We started concepts with “Moby-Dick,” which we called “Leviathan” [Mastodon’s second album]. I sort of took the reins on that. I provided a brief outline of what I thought the story should be, and then some guidelines for each song — like “song by song, this is what’s happening.” It was the same with “Blood Mountain” [from 2006] — I laid it out in an outline.

LEO: Is it mostly songs from new disc, “Once More ‘Round the Sun,” or older material that we’ll hear at Louisville? Do you mix set lists much these days?

BD: We try to. At this point we have 70-something songs. It’s a bummer that we know 25 of them, maybe. The last couple of tours, we’ve tried to reach back to revive songs that we haven’t played in a very long time.

BD: It’s for real. That came from our lighting guy, Mike, from Chicago. Friends of his [with Dark Matter Coffee, darkmattercoffee.com] said, “Would you be interested?” and we said, “Of course.” I love coffee, and Mike’s a coffee connoisseur, so I knew it’d be good. So we talked, and now it’s out. The packaging is beautiful and the coffee’s amazing.”