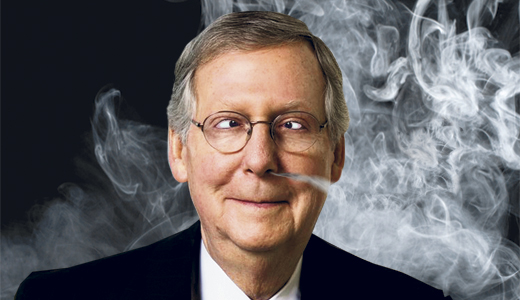 In the most extensive and wide-ranging media interview of his 30-year congressional career, U.S. Senator Mitch McConnell expanded on his recent comment to the Cincinnati Enquirer editorial board that he is “not a scientist,” and therefore cannot form an opinion about climate change.

“I need to add that I also have no opinion on many science-type things, including the Ebola virus, Alzheimer’s research, or carcinogens in the water,” the Kentucky Republican explained. “Look, it’s much easier to parrot the positions of the people who give me money. That way, I never need to defend myself. I can just refer people to the research they funded.” McConnell met with about a dozen Kentucky-based reporters for a little more than an hour, largely refusing to ask questions but offering revealing insights into his decision-making process. “As you probably know, there are many topics I have to deal with as a senator for which I have no background. I am also not an auditor, an actuary, a biblical scholar, a coal miner, a farmer or an astronaut,” said the veteran lawmaker. “So you shouldn’t expect any independent judgment from me on anything related to them.”

McConnnell is facing a tough reelection challenge from Kentucky Secretary of State Alison Lundergan Grimes, and he was quick to point out that she also is not a scientist. “I have not been a scientist for a lot longer than my opponent,” the five-term incumbent said. “I’ve mastered the art of dealing with fantasy and ignoring reality. She is still conflicted.”

Sensing some skepticism from the reporters, McConnell showed one of his trademark turtle smiles and talked about his work on the major tobacco buyout that eliminated Kentucky as one of the larger tobacco-growing states. “I know what you’re thinking,” McConnell said. “How could a non-smoker have figured that whole thing out. Well, my dad was a smoker, so I learned a lot from second-hand smoke.”

As the interview was winding down, a Courier-Journal reporter broke the ground rules and asked McConnell if he was anything. “I’m a lawyer, of course, so I know how to take whatever side of an issue I need to in order to win.”

LOCAL
Mayor announces Festival Day, a day to celebrate all the festivals celebrating everything else.