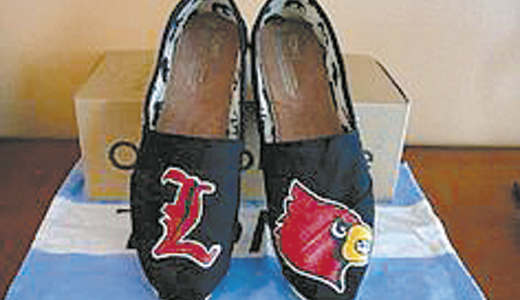 Photo courtesy of Etsy/Soles of the South

Sitting in front of his locker, starting guard Terry Rozier looked down at his Adidas sneakers. He later recalled that he lost track of time while reflecting on the shoes he was supposed to wear, and what that meant to all college basketball players past, present and future. He said he felt compelled to do something.

Now, Coach Rick Pitino and the rest of his Cardinal team plan to do something about it.

In a show of solidarity, the University of Louisville men’s basketball team will wear TOMS slip-ons for their home-opening game of the season.

The recent addition of legitimate college basketball recruits to the endangered species list has sparked a lot of conversation in recent weeks. While the move by the U.S. Fish and Wildlife Service has taken significant criticism for the unprecedented addition, it stands by its decision.

In a release they agency states, “Legitimate college basketball recruits have been in decline for decades, and the time to take action is long overdue.”

For the Cards — one of the nation’s most successful programs in recent years — the epidemic finally took one of their own when top recruit Antonio Blakeney committed to the university before disappearing only days later, not to be heard from again. Experts believe that upon realizing he would never be able to wear Nike, the only shoe he apparently has ever worn or would consider wearing, Blake-ney vanished.

Apparently the loss of one of their most prized recruits was too much for Rozier, who said he will never be able to look at his Adidas the same again. “It’s just so hard,” he said, “because something I love so much, led to the loss of someone so close to us. Almost like a teammate.”

Pitino, for his part, brought the issue to center stage during his annual preseason press conference. “What I personally don’t like [is] I can’t recruit a kid because he wears Nike on the AAU circuit,” Pitino said. “I had never heard of such a thing and it’s happening in our world. Or, he’s on the Adidas circuit, so the Nike schools don’t want him.”

Rozier indicated that he has worn TOMS, and what they will cost on the court will make up for in making a difference. “I’ve worn TOMS in the past,” he explains, “and while they might hurt us, particularly on the defensive end, we are confident it’s the right thing to do.”

University of Kentucky head coach John Calipari told reporters via email that he can’t believe people actually think this is a problem, and he thinks people should just stop complaining and try on a pair of Nikes.