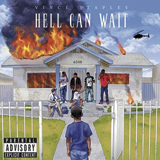 Not since the Gravediggaz has a hip-hop album seemed to give such little of a shit about religious humility. When Vince Staples raps that he’s probably going to hell anyway on the opener, “Fire,” you believe him. That the album is titled “Hell Can Wait” makes it seem like a supposition: This is a certainty that he’d just as soon put off while he goes hard in the interim. And what he does is rap high pitched over enormous drums. It’s a clever juxtaposition, actually, to hear his tenor in contrast to monolithic beats —­ the perfect sonic marriage. He sounds young, adding a layer of seriousness to his plight; from his prerogative, this is a long life to live through, one that he already feels will result in eternal damnation. But he’s sure as hell going to have fun in the meantime.