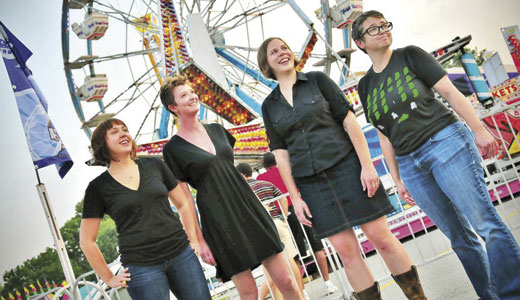 Julie of the WolvesPhoto by Solidarity Photography

As I write this, my first daughter is soon to be born. Having been part of the music scene for years, whether as a musician myself or as an observer, I hope that my little girl has those same opportunities, that she feels empowered to become part of the often male-dominated music culture that taught me the power of the individual to make a difference. Clearly punk and indie had a huge influence on me, and it had a similar effect on the women behind the Louisville Outskirts Festival, meant to highlight the unique voices of women in music.

The festival, which includes acts like Shannon Wright, Tara Jane O’Neil, a reunited Drinking Woman, Cher Von, Juanita and many, many more, all started as a dream between co-founders/co-organizers Stephanie Gary and Carrie Neumayer, both of the undeniably catchy band Julie of the Wolves.  Gary recalled, “It’s something I’ve daydreamed about for a long time.  Both Carrie and I really want to recognize the female musicians who are active here in Louisville and hopefully inspire a whole new generation of girls to give music a try.”

Neumayer elaborated adding, “The band Stephanie and I play in,                              , had booked a few local shows with lineups that were comprised of mostly women and those shows felt really good to play and be a part of! We noticed that there were more women in the crowds than usual and the atmosphere was really fun and supportive. We thought it would be fun to create that on a larger scale and introducing a larger slice of Louisville to all the great music being made by women here in Louisville and beyond that I think sometimes go overlooked or under appreciated.”

In my experience as a musician, women are typically treated as the other, as some kind of “weird” outsider that just so happens to comprise 51% of the Earth’s population. How very strange indeed that they might pick up a guitar. So I wagered that for Gary and Neumayer they’d probably faced a lot of inane questions that I might never face as a white, heterosexual male, and was curious as to how that may manifest in their life. According to Neumayer, “In Julie of the Wolves, we often get asked, ‘Why did you choose to have an all-female lineup?’ That’s not an idiotic question, but it’s one that we often find ourselves having a difficult time answering. No one would ask an all-male lineup that.”

Gary puts it in perspective, turning the question around on me in a way that I’d never considered. She explained, “I think in almost every interview I’ve done in my career as a musician, I’ve been asked a question about my gender. I’m not saying that questions about gender and music are idiotic; I’m just saying they wouldn’t come up if I were a guy.  I wish as a society, we didn’t have to think about it, so that’s the reality I’m working toward.”

She’s right and I know that; it really shouldn’t be a thing worth asking.

The good news is that people have shown a keen interest in the Outskirts Festival, offering generally positive feedback. Of their most commonly received questions, Neumayer notes, “One that has come up a lot is “Are only women allowed to attend the festival?” The answer is: Everyone is welcome! We don’t want to exclude anyone, we just want to showcase a lineup that features women. We’ve had almost unanimous support from the community, but of course there’s always a hateful internet troll or two out there.”

Continuing, Gary adds, “As we promoted the festival, people would say, “I know a female musician! You should have her play!” It kind of highlighted the problem.  Would we have gotten the same response if we hadn’t specified a gender?  Would people have told us about their one male musician friend? I’m guessing, no.”

There is plenty to like at here too. Gary and Neumayer have been busy working on the Festival in a number of ways ranging from benefit shows to drink promotions at the Flea Off Market. Neumayer explains, “We have been pretty ambitious with this festival. In addition to all the events in October, we’ve been busy since February staging benefit shows and other events to bring attention to what we’re doing while using

it as an opportunity to highlight even more bands and performers. We hope to continue doing Outskirts-related shows throughout the year. Working on this festival has turned into a second job in a lot of ways. There’s a ton of work that goes on behind the scenes with grant writing, fundraising, booking, accounting, coordinating volunteers, promotion, communications, design, etc. It’s been very rewarding so far — especially connecting and working with other people in the community who believe in what we’re doing.”

With so many great bands out there, how did they finalize their lineup? “We definitely spent quite a bit of time on the Internet, sending videos and Bandcamp pages to one another with headings like ‘Oooh! Listen!’” I think we could have made this a month long event with all the bands we wanted to invite.  We really did have to limit ourselves this year though.  We wanted to make sure we didn’t over extend in hopes that we can have a successful first year and continue this as an annual event.

Neumayer continues, “Stephanie and I come from the indie rock/punk rock world, but it was important for us to showcase a variety of styles and to demonstrate that “women’s music” is not a genre of music. We wish we had a full week to include every single act that we learned about or who contacted us.”

In addition to music, the Outskirts Festival is hosting “Rockshops,” designed to introduce girls of age 10-18 to music, and a resource fair that provides space for artists, crafters, small businesses, and social justice oriented not-for-profit organizations. Neumayer describes that, “The Rockshops will be led by 17 different women who are all actively involved in Louisville’s music scene. Girls in the workshops will choose an instrument group to learn techniques, but will then form their own bands, in which the instructors will act as “band managers” and jump in as needed. At the end of the weekend, the girls will have an opportunity to perform an original song for each other and their friends and family.

She concludes, noting, “One reason we wanted to add Rockshops is that there are many younger girls who might have an interest in playing their own music, but fear not being “good enough” or worry about their peers might judge them negatively as they try to learn. We wanted to create an environment where girls could feel safe and supported while having fun and learning how to make music together.”

Gary enthusiastically offers, “In some ways, planning the Rockshops has been the most exciting part of the Festival.  Carrie and I both come from teaching backgrounds and both really wanted a rock camp in Louisville.  Seeing this take shape — from working with the completely inspired instructors, to hearing women our age comment that they wish Rockshops had existed when they were girls, to hearing a little of the girl’s stories on their registration forms — the whole process has been so great!”

For both co-founders/organizers, the Outskirts Festival has been as much about community outreach as just music. For Neumayer, “One goal of this festival is community building. That has been happening in a number of ways already: we have volunteers who are bringing their own skills and ideas to the festival and helping shape it.”

“We’ve already got reservations from some great organizations and vendors and we still have room for more!  All businesses are welcome, and we’d really love to have a great representation of Louisville’s female-run businesses,” Gary says, adding, “We’d do this festival all year long if we