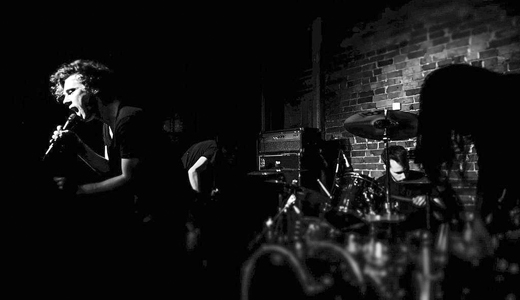 There are bands that crumble under the weight of their own imperative, whose constituency bristles at every perceived conspiracy to their vision, losing sight, of course, of that very vision that is lost when not shared. And then there is Xerxes. Despite a lineup change that at least superficially seems to have dramatically altered their sound, the core DNA of the band is intact. As the Louisville post-punk four-piece gets ready to drop its sophomore album, “Collision Blonde,” on October 21, gone are the blistering 4/4 beats and most-ready breakdowns part and parcel to hardcore, replaced now by minor key melodies set to dense sonic textures, all punctuated with the same emotional release that had come before. Theirs is as much about evolution as it is in being open to that change and all that comes with it — a very Taoist approach to music.

Catching them a few months ago at a benefit for the Louisville Outskirts Festival, I was pleasantly surprised at how much I appreciated their sound, which defies any easy comparison. Sure, there are comparable proto-emo/New Wave acts, but none seems to fully encapsulate what Xerxes has evolved into. Drummer Ben Sears identifies the band as “a bunch of hardcore kids playing aggressive music while appropriating stuff we like from music from the ‘80s and ‘90s. Some people might say it sounds like The Cure or Killing Joke or Rites Of Spring or whatever. There’s elements of that stuff, but at this point, we are three or four generations younger than those bands. So it’s hard to say where it all comes from.”

Singer Calvin Philley adds, “I jokingly call it an anti-hardcore record, but there is an ounce of truth to that. It’s a hardcore record that wants to be a pop record.”

There is more than an ounce of truth here. The band has all the angst and aggression of hardcore, but none of the trappings. For bassist Joseph Goode, it’s simple: “I think this band being an almost totally different incarnation of what it was two to three years ago is why that shift is there. We’re all weird people from different places within the same city, and we wrote this record as organically as we could given that.

“With ‘Our Home is a Deathbed,’ we definitely were looking into doing a record with a strong screamo/post-hardcore direction that we honestly have just not been as into anymore,” Philley says of their previous effort. “Call it growing up or maturing or maybe just the lineup change; there’s been a ton of change in both my and Will’s lives and tastes since then.”

One thing that didn’t change was the narrative quality of the music, led by Philley. Of the album title, he explains, “It’s kind of a weird personal story, but I suppose the point here is to put myself on display: A girl I loved said while we were dating that she dyed her hair because she thought her natural color was like dirty dishwater. I was always trying to think of a more attractive way to describe it the way I saw it, and after we had an extremely messy breakup, I thought, “collision blonde,” because that’s what we were always doing — colliding violently and then breaking apart. I felt like it fit the theme of the record.”

Clearly then, for him, there is an objective reality to be had: “With the words set to music, I think the emotional intensity is raised to a new level of understanding,” Philley says. “A frantic drumbeat and wild guitar feedback will make words about losing control and feeling lost have an even stronger impact.”

In his book, “How Music Works,” David Byrne writes, “Context largely determines what is written, painted, sculpted, sung or performed.” This certainly seems true of each member of Xerxes. As Philley was impacted by the dissolution of his relationship, each individual has a rapport with his environment, namely Louisville. Sears believes, “If you’re a kid into punk music, there’s not much to do. It’s a city that requires you to entertain yourself. There’s not much national attention given to our punk scene, either. As a result, a lot of weird stuff is made.”

Continuing, Philley adds, “Everyone kind of just does their own thing. There’s a bit of an element of isolation here, so we’re just a bunch of freaks flying our flags.”

This is exactly what they do: fly their freak flag. Whether they’re breaking the hardcore mold or just working in service to the song, it’s clear that Xerxes is a labor of love. Recording their newest album with producer Evan Weiss required plenty of preparation.

For guitarist Will Adlard, it was a new experience. He explains, “It’s a little different for me, because I am usually the one doing the engineering and mixing. But like a month before we actually start tracking, I’m usually scrambling to get some interesting gear for the studio — something to kinda make the record sound a little more unique, ya know? After I get that, it’s a lot of mapping and thought about what mics to use where, what preamp to pair with them, and how to acoustically treat the live room (which is the other side of the basement) to benefit the sound we are striving for the most.”

Goode had a far more relaxed experience. He notes, “It was great. Evan Weiss produced, Will engineered the whole thing and it all happened in his (at the time our) basement in Louisville. At the time, I had just finished reading ‘Antoine Bloye’ by Paul Nizan and it really made me hate having a job, so I was in a great mindset to take some time off work and romanticize the recording process.”

Regardless, the musicians put as much thought into their live shows as they do their recordings — and, based on my experience, it shows. “The factors of a good show seriously come from the whole day,” Goode says.

“Staying in a good mood, trying not to put any greasy fart food into my body, stretching, maybe reading, hanging out, etc. And as for the show itself, staying in sync with Ben, having good sound and hearing great bass tone.”

For Philley, “A good show for me is all about catharsis. I want to walk away from the stage feeling like I successfully just got something off my chest. I don’t care too much about how many people are there or how good sound quality was, although those do help.”

They’ve certainly succeeded in some great shows. Adlard notes his favorites: “There are a lot of contenders, but I think the best show the band has ever played was either Fluff Fest in the Czech Republic or maybe Ieper Fest in Belgium — and not entirely because there was a sea of people watching, but because I think we played really well and all had a really fun time. Both were at extra-excruciating parts of one of our most grueling tours we have ever done, and I think those were … reassuring moments that validated that.”

Sears has a simple and elegant take on his top pick. He recalls, “The first show back was surreal. We were surrounded by friends and running on the excitement of playing nothing but new songs.”