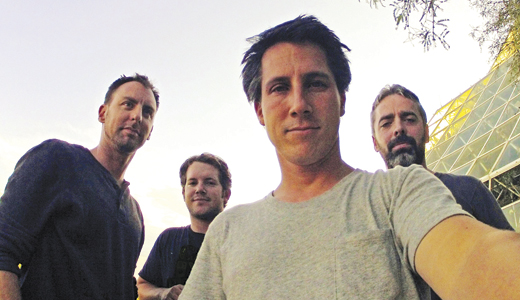 “I never saw a huge difference between working with sculpture or working with sound,” says Nick Zammuto, whose music is as physical as it is audible. With an affinity for polyrhythms and found sound, Zammuto spent over 10 years with cellist Paul de Jong as the folktronic duo The Books. He’s since started a new chapter in his career, leading a four-piece act under his name.

“You can’t expect lightning to strike twice. It just doesn’t happen,” he says. “The fact that I’ve had that kind of support is such a gift. And really I just want to have this more one-to-one relationship with people in the future.”

He refers to the Indiegogo campaign used last year to fund Zammuto’s second album, “Anchor,” with a $10,000 goal that was met with over $30,000 by its end. It was the boost of confidence he needed to finish the record he had envisioned.

Zammuto’s 2012 self-titled album compounded electronic and acoustic details in complex yet easily enjoyable songs. “Anchor” follows up with a selection of slow-simmering, textural risers, with the exception of the rigid standout “IO,” and guest vocals from Daniela Gesundheit of Snowblink.

It all took place in the recording studio adjacent to his home in the mountains of southern Vermont. The Zammuto family moved there following the release of The Books’ final album. With help from Zammuto’s wife, they reworked the simple structure into the home — and garden — of their dreams.

Zammuto’s love for architecture and design eventually found its way into the writing process, owed in part to the strange devices he built as incentives for the funding campaign. Like the bass projector: an interactive sculpture that reflects an adjustable laser onto a flexible mirror (which is attached to a speaker), producing infinite shapes dependent on the sounds put into it. The design includes an iPod containing music he wrote for the piece. What was it like writing music for an object?

“It’s crazy,” Zammuto says. “I think it’s so much more fun to be looking at an object while composing rather than looking at a computer screen, or staring off into space. The object becomes almost like a living thing at that point, because it’s animated … I felt like it was a real conversation with the object.”

He also loves to scratch vinyl — something he picked up at age 14 after pulling Kraftwerk and Bach records out of the public library. It’s a nostalgic practice that involves carving indentions in the center of the vinyl to create a percussive loop. He’s crafted hundreds of scratched editions of “Anchor,” but he says this doesn’t affect the music on the record. “But then, when the record ends and the scratches start, you realize that what you’re listening to is complete illusion. And all the time you were just listening to plastic and copper wire.”

Whether it’s through sculpture, scratched vinyl or writing ambient music with his 5-year-old son, Zammuto has certainly eluded convention in his approach to music.