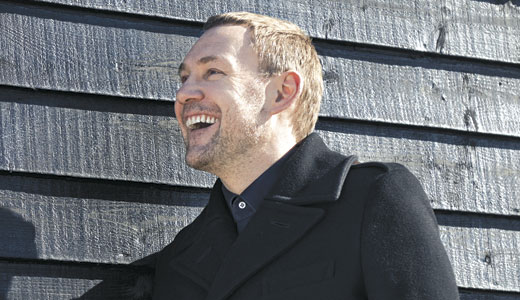 David Gray reached the heights of stardom with his 1998 album “White Ladder.” He knows he may never experience that level of success again. After all, the vast majority of artists never sell seven million copies of their entire catalog of albums – much less reach that worldwide sales total on a single album like Gray did with “White Ladder.”

But at least on an artistic level, Gray feels with his new album, “Mutineers,” he returned to a place he found himself when he started work on “White Ladder.”

“‘White Ladder’ was an unself-conscious record. It just spontaneously happened,” Gray said in a recent phone interview. “I opened the music up to other people and other ideas. And (“White Ladder” became) something that sounded still very much like my music, but it had a slightly different sound. It sounded like a record of now when we made it. That’s what we ended up with, something even stronger than I could have done on my own. And that was because I let go. I let other people in. And this record (“Mutineers”) has been the same in that way.”

Gray openly admits that while the success of “White Ladder” was thrilling, the aftermath wasn’t always pleasant, as he dealt with commercial expectations for his subsequent albums and sought to move forward musically.

“It was a difficult experience as much as a wonderful one, and a powerful experience, a profound, life-changing experience,” Gray said, looking back on the time after “White Ladder.” “You can’t reverse it. You’ve got to go with it and find your own way through. I didn’t want to start playing stadiums or that stuff. I didn’t know what I wanted, to be honest. For awhile, I was just completely overwhelmed, not while we were going there, but when we got to the top, that rarified plateau.”

Gray continued to release albums to declining levels of success. “A New Day At Midnight, his 2002 follow-up to “White Ladder,” was a big hit in the United Kingdom and sold respectably in the states. But 2005’s “Life In Slow Motion,” 2009’s “Draw The Line” and 2010’s “Foundling” delivered diminishing returns – and not just in sales.

After releasing “Foundling,” Gray sensed he had grown bored with his musical methods and had reached a creative crossroads. But it took Gray a bit of time to realize just how far he had to go to find the kind of new creative spark he was seeking.

He tried to mix things up first of all by changing his approach to songwriting. In the past, Gray’s songs had generally started by coming up with a melody or chord sequence. This time, he often began with lyrics, using lines he had written or words from books or other sources to give him a structure around which he could write music.

But a pair of recording sessions – one with Gray self-producing and another with Robbie Malone, producer of “Draw The Line” and “Foundling” —  failed to produce the results Gray wanted.

“There were no surprises,” Gray said. “We were trying too hard to do something different with the same people, the same formulas …This led us back to the places that we already knew. It just didn’t have the thing I was looking for. I wanted something I hadn’t heard, something surprising.”

Gray realized he would have to take considerably more drastic steps if he was to get excited about his music again.

“Something else was needed, somebody else, a collaborator, a producer in the true sense of the word,” Gray said.

He found that person in Andy Barlow of the electronic-leaning duo Lamb. Gray’s mission statement to Barlow was to not let him fall back on old creative habits. Barlow was more than ready to meet that directive.

“He was somebody who took me on creatively in a really strong and robust way. He really stood up to my ideas,” Gray said. “He pushed me into areas where I didn’t really know what I was doing or where we were going.”

Gray knew he was in for a challenging experience early on. He brought in some 40 songs for Barlow to review, and the producer rejected all but a handful of those song ideas.

“He preferred to have me go off and look and try to create something new, something different, which I just thought was an act of madness because there were so many things I already had in the bag,” Gray said. “He sort of sensed that there was more joy to be had going toward ideas where I didn’t have the lyric, where I didn’t have the full song. And he could throw ideas and sounds, crazy ideas, at me because I would be slightly off balance just trying to even figure out what it was myself. So that was how we worked.”

The approach forced Gray to rewire his creative thinking, and Barlow wisely was recording the whole time, which allowed him to capture the initial performances of songs and the excitement that was present when songs began to form and make sense.

“We weren’t trying to chase demos or do this or do that,” Gray said. “We were looking for something and we didn’t know what it was. When it started to come together, congeal in a sort of creative sense around the sort of central core of the idea, when the sound began to come together and the lyrics, I would sing them down and we would start to stretch out the idea of the song and the shape of the song and the sound of the song. And that first instance was the one we captured when we were recording.”

For all that was different in the process of writing and recording “Mutineers,” the album will sound familiar to Gray fans. His songs remain in the burnished pop-folk mold of his other albums and possess the gracious melodies and literate lyrics that characterize his best work.

The differences are mainly found in the margins of songs, with creative choices of instrumentation (the tinkering tones that introduce the title song, the lovely violin that provides a soothing bed for “Birds of the High Arctic”), smart and less-than-obvious instrumental parts (the rolling beats of “As the Crow Flies” and the organ and electric guitar that tastefully wash around Gray’s vocal on “Snow in Vegas”) and deftly applied production touches (the scratchy textures that accompany the sepia-toned piano of “Beautiful Agony”). The songs are immediately appealing, but it’s the nuances that help give “Mutineers” the ability to surprise after several listens.

The varied sounds – and especially the layered backing vocals on many of the songs – have prompted Gray to bring out a large, versatile band to tour behind “Mutineers.”

“There are eight of us, and everyone’s playing an instrument and singing,” Gray said. “There’s quite a bit of layering of instrumentation on the record, but it’s the vocals really that I thought were the most key. So we had to get the power of them across.”

Gray has also used the capabilities of his band to give songs from his catalog a new shine in the live setting. “I kind of have a new look at them and refresh them and use whatever assets I have on stage with me to bring a new life to them,” Gray said. “There’s plenty of old stuff that we’ve worked up, but again it has a new twist to it.”