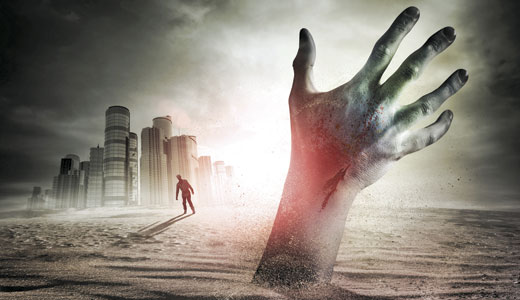 Sarah Eichhorn laughs when she hears about how “weird for zombies” this town is. She’s never visited Louisville and admits she has never seen “Return of the Living Dead,” the B-horror flick that was set and filmed in Louisville in the mid-’80s. (I told her she can watch it on YouTube.)

“I’ll have to work that into my presentation,” said Eichhorn during a phone interview from California last week.

The University of California, Irvine, mathematician is in Louisville this week along with her colleague, neurobiologist Andrea Nicholas, to present, “Surviving the Great Zombie Apocalypse,” an hourlong examination of how math and science can save us from the zombie hordes.

Their presentation tomorrow (Thursday, Oct. 2, 3–4 p.m.) is part of the 2014 IdeaFestival (www.ideafestival.com) at the Kentucky Center for the Arts. The annual event — running today, Thursday and Friday — has brought together leading thinkers, doers and innovators for the past 12 years.

In “Surviving the Great Zombie Apocalypse,” Eichhorn and Nicholas use the zombie metaphor to look seriously at how to deal with natural disasters and disease epidemics.

“I had a student come to me a few years ago who wanted to do a project using the zombie apocalypse scenario,” said Eichhorn, who is associate dean of distance learning at UCI and has her Ph.D. in applied mathematics. “It worked out well.”

Last year, Eichhorn was one of four instructors who led a massive online course called, “Society, Science, Survival: Lessons from AMC’s ‘The Walking Dead,’” which was offered through a partnership with her university, AMC and an organization called the Instructor’s Canvas Network. It was after that experience that Eichhorn and Nicholas’ “Surviving the Great Zombie Apocalypse” took shape.

“We talk about how mathematics can be used to understand the dynamics of disease spread,” Eichhorn said, “and how to use biology and ecology to stop zombie viruses. With physics, we can develop weapons against the zombies.”

Kris Kimel, IdeaFestival’s founder and chief programmer, says the issues discussed by Eichhorn and Nicholas are prescient when you consider what’s happening right now in West Africa with the Ebola outbreak.

“We put the festival together throughout the year,” Kimel says, “but we leave slots open as the event gets closer in order to stay current. What we always like to emphasize is that the answers are everywhere. The zombie apocalypse talk is a good example. When you peel back the leaves of the onion, you realize that it’s an excellent metaphor for ideas about contagious disease and social breakdown.”

Kimel says this year’s IdeaFestival features a diverse offering of speakers, from authors and economists to scientists and tech entrepreneurs to artists and musicians. Being able to make the different connections among the presentations is the key.

“Yes, the talks are diverse, but everything is related,” he said. “You have to be prepared to connect the dots.”

Jason Felts, co-founder and CEO of Virgin Produced, knows about connecting dots. A featured speaker at this year’s IdeaFestival (Friday, Oct. 3, 4:30–5:30 p.m.), Felts runs the entertainment division of the Virgin Group, which produces, develops and packages films, television, new media and digital entertainment. He will discuss the evolution of Virgin Produced and his views on the future of media.

“It will be an opportunity to hear from someone who is truly on the cutting edge,” Kimel says.

From Felts, you can draw a straight line to another speaker at IdeaFestival, George Mason University economist Tyler Cowen, who will explain how our highly competitive, innovation-driven world has meant the death of average — that average leads to irrelevance.

And if you’re one of those luddites who think that all of this innovation only serves to create technology that is making us more average — perhaps even stupider — IdeaFestival speaker Clive Thompson will attempt to dissuade you of that notion during his talk, “Smarter Than You Think” (Friday, Oct. 3, 3–4 p.m.).

Thompson, who writes for Wired and the New York Times, will discuss how technology is changing the way we think, often in ways we don’t understand. Covering the history of technological innovation, he’ll explain how people have adapted to the change and how the rush of innovation may be making us smarter in many different ways.

To learn more about these presentations and to see a complete agenda of the 2014 IdeaFestival, visit www.ideafestival.com/if2014-agenda.