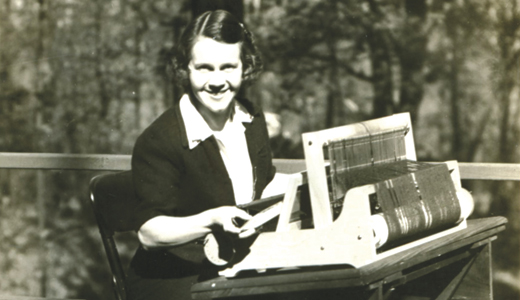 The Little Loomhouse is located on a tree-draped property on Kenwood Hill Road near Iroquois Park in South Louisville. The name refers to three 19th century board-and-batten cabins (Esta, Westeria and Tophouse) that are listed on the National Register of Historic Places. They have an illustrious history. Mildred and Patty Hill, the sisters responsible for “Happy Birthday to You,” first sung their famous song at a party in Esta. The cabins have also hosted two first ladies, Lou Henry Hoover and Eleanor Roosevelt, and noted architect Frank Lloyd Wright.

“You feel the history as soon as you step on the property,” explains Rosemary McCandless, a longtime volunteer. “It is like going back in time. Not much has changed here since the 1800s.”

The Little Loomhouse got its name from master weaver Louisa Tate Bousman, inventor of a small table loom for young girls. Bousman, known professionally as Lou Tate, was born in Bowling Green in 1906. She graduated from the Louisville Girls High School and spent one year at the University of Louisville before enrolling at Berea College, where she earned a Bachelor of Arts degree, followed by a Master of Arts in History from the University of Michigan. Her interest in weaving began when she received five generations of weaving patterns from an elderly weaver. From then on, she began her unique contribution as an American hand-weaving historian. Collecting old patterns, called drafts, took her into the far reaches of Kentucky — often on horseback.

Bousman moved her business to the Kenwood Hills property in the 1930s. She used it as her storefront, classroom and vault. The Little Loomhouse soon became the center of a weaving network that exists to this day. Since Bousman’s death in 1979, the nonprofit Lou Tate Foundation has maintained the cabins and offered classes in spinning, dyeing and weaving. The all-volunteer organization also maintains the biggest repository of original and classic textile patterns in the United States.

“Weaving has long been an artistic outlet for women,” McCandless says. “What is so amazing about the Little Loomhouse is its history as a gathering place for strong, educated women. Lou Tate was contemporary with so many women that were important to Louisville history. She used to buy pottery from Mary Alice Hadley of Hadley Pottery. She would give the pieces away as prizes. The Loomhouse is full of connections like this. It is something we want to preserve.”

But the Little Loomhouse is in peril. The cabins are deteriorating because they were not built to last as long as they have. In 2010, the Lou Tate Foundation brought in the historical preservation firm John Milner Associates to inspect and access the property so the organization could come up with a list of priorities for repairs. The architectural firm found $350,000 in needed infrastructure and landscape improvements. Problems included sagging floors and the real possibility that the structures could fall down the side of Kenwood Hill if they were not reinforced.

The Lou Tate Foundation is using the Little Loomhouse’s 75th anniversary to focus attention on the upgrades needed at the property. The organization’s annual weeklong art sale and exhibition, Holiday in the Woods, will kick off on Saturday, Nov. 1, with a fashion show of costumes inspired by people from Loomhouse history. The event also features local artisans, food, beverages and entertainment. Stefanie Buzan, one of the event organizers, says this is an opportunity to celebrate the contribution the Little Loomhouse has made to Louisville culture and make sure it’s around for the next generation.

“What has been so important to me is getting the cabins rehabilitated so they will be here 75 years from now,” she says. “I want them to witness the 150th anniversary of the Little Loomhouse. I realize the classes and the weaving could go on without the cabins, but the property is what really makes the Little Loomhouse magical.”

Holiday in the Woods takes place on Saturday, Nov. 1, 4 p.m. to 9 p.m. at the Little Loomhouse, 328 Kenwood Hill Rd. Due to the limited space at the Loomhouse, guests are asked to park at DeSales High School, 425 W. Kenwood Dr. A free shuttle will transport everyone to the festival.