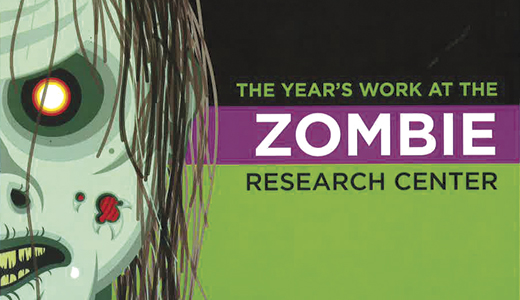 Zombies are stalking us. They’re appearing in hordes throughout our contemporary pop culture — zombie books, movies, comics and wildly successful TV shows. “The Walking Dead,” created by Kentucky natives Robert Kirkman and Tony Moore, is one of the most successful comics to appear in years, and an even more successful TV show — so much so that media critics speculate that it may even eclipse “Monday Night Football” in ratings, a feat that transcends the genre and exceed what were thought to be the limitations imposed by airing on a cable network.

Home to the world’s oldest and longest zombie walk, Louisville is particularly zombified. For the past years, Louisvillians have donned undead threads and makeup and lurched through the Highlands. This week, the outbreak spreads to the University of Louisville’s Belknap Campus.

Why are we so obsessed with zombies? U of L professor Aaron Jaffe and IU professor Ed Comentale’s 529-page book “The Year’s Work at the Zombie Research Center” sets out to answer that question with chapters exploring zombies from every academic perspective imaginable — psychoanalytic, feminist, linguistic and more. A Q&A with Jaffe and and Comental is the centerpiece of U of L’s Zombie Week … of the Living Dead, a zombie-themed week that includes zombie movies of all varieties, academic presentations on zombies and of the requisite costumed meet up, what Jaffe and Comentale would describe as a meeting of “F-zombies” (people who are passionate fans of zombies). Yes, not only do Jaffe and Comentale categorize zombies in this way (there are (S-zombies, special- or star-zombies; P-zombies, philosophical zombies; R-zombies, real zombies and more), but they even take up the contentious question, “What exactly is a zombie?”

According to Jaffe, “George A. Romero’s definition might be the best: corpses that do not know they’re dead. But we’re not purists. There are lots of kinds. Some are fast, some are slow. Some eat brains, some don’t. Walkers, roamers, ghouls, geeks, biters, lurkers, flesh-eaters, shufflers, biters, creepers, the infected, and on and on.”

Furthermore, he clarifies, “Earlier zombie stories always involved some kind of magic or religious practice, whether in the Judeo-Christian of resurrection or the African-Haitian nexus of voodoo. Today’s zombies, though, seem distinctly scientific and biological. It’s hard to think about zombies today without thinking about viruses and ecological disaster. They also have us thinking in new sizes and scales — the microscopic and the macroscopic.

For many zombies are ciphers, a reflection of their culture. Jaffe certainly agrees, explaining of his interest, “Zombies have us rethinking all the big questions that have troubled philosophers and humanists for years: What makes a human a human? Is identity rooted in mind or body? What are the limits of family or community? Can you have law without violence? The topic is a no-brainer from a cultural theory point of view, a great laboratory of interdisciplinary cultural method, analysis, criticism and thought in the arts, literature and humanities. The book assembles a crack team of experts in various fields: political theory, philosophy, biology, linguistics, literary studies, mixology. They each have their own weapons and skills for doing battle with the undead.”

Continuing, he notes, “We’re scholars committed to thinking like fans. We run a series on fan culture that brings together both academic and more popular ways of thinking about our culture. Our first book in the Year’s Work series was on “The Big Lebowski.” A follow up on zombies seemed necessary.”

It’s that care for fandom and pop culture that informs Jaffe’s views on the popularity of his most recent subject. He believes that “zombies are everywhere (news, entertainment, economics, politics, science, etc.), and everyone seems to have an idea or two about what this means. We wanted to provide a smart guide to the many ways of understanding why zombies and why now and assembled a dream team of different humanities experts to do justice to the topic. … More pointedly, it’s become harder and harder to think of people as people. We live in what’s called a post-humanist age, one that defines human beings in decisively non-humanist ways: biologically, economically, racially, politically and nationally. It’s hard to maintain faith in anything like a self, let alone a democracy; zombie films and shows help us think through some of these issues.”

So if the zombie apocalypse starts, how would you survive? Jaffe has a foolproof plan for survival. He explains, “First find a deserted farmhouse, board it up, then squabble about whether to hide in the basement or make a dash for a truck. If you can’t find a house, helicopter out or go to the mall. You might head to D.C. and try to hit the reset button. If you don’t have a survivalist stash of armaments, get yourself a club or a torch. Beat ‘em or burn ‘em. They go up pretty easy.”

As to whether there can be too much zombie lore in our culture, well, Dr. Jaffe thinks we’re safe. He quips, “If it’s undead, there’s no such thing as overkill, right?”

Jaffe and his co-editor, Comentale, will be available for a Q&A Thursday at the Chao Auditorium at the Ekstrom Main Library, followed by a zombie walk and screening of Romero’s 1968 classic, “The Night of the Living Dead” at Floyd Theater. The zombie movie marathon continues at Floyd through the weekend, with Louisville’s own 1985 zombie classic, “The Return of the Living Dead,” showing on Halloween at 5 p.m., and a double creature feature Friday with “Shaun of the Dead” at 5 p.m. and “Dawn of the Dead” at 8:00.

Zombie Week
Through Saturday, Nov. 1
U of L, Belknap Campus