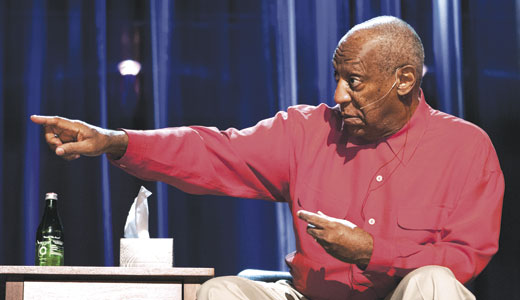 “This person needs no introduction” has been said countless times and yet never before has that statement been truer than it is right here. The following is an interview with the Bill Cosby. He has a new special “Cosby 77” premiering on Netflix next month, and he will be performing this Sunday at the Louisville Palace Theater.

LEO: Most comedians credit you as one of the men who molded modern comedy. Who would you credit alongside yourself?

Bill Cosby: First of all, I haven’t molded … those guys don’t copy me, what they do is … let’s go to jazz. I’ll give you John Coltrane, all right? Before Coltrane there was Coleman Hawkins, Ben Webster and Lester Young. And because Coltrane admired them, comes a new and different style.

So these guys listened to my albums and they laughed, and they enjoyed it – and it inspired them to do something new. These guys wanted to pickup the horn – [Jerry] Seinfeld, Steven Wright, the late Mr. [Robin] Williams – they see people like Jonathan Winters and they wanted to play. Now, Jonathan Winters will forever be the Man. That brain, wherever it is, if they didn’t burn it, they need to pick it up and put it in the comedy Hall of Fame.

LEO: Since you mentioned jazz, what is your favorite jazz album of all time?

BC: None. You can’t do that. If I gave it to you today, it would be another one tomorrow. What I’ve done is I go on these sort of spurts. I’ll listen to Mingus. And then turn around and get Nancy Wilson. I’ll listen to “The Masquerade is Over” and wonder why she’s not in the Kennedy Honors Hall of Fame. Then I switch off, man – and get that heavy left-handed Earl Gardner and I fall in love. Then I turn around somewhere and grab Horace Silver; I listen to him and smile, because he was a rock ‘n’ roll pianist playing jazz and taking it to another level.

And of course, you get into Miles Davis … I remember as a teenager, every time someone would say, “Miles broke up his group.” We all thought, “Well, that’s it for Miles.” But then he’d come with another one and … boom.  Home run. Genius.

LEO:  Will you let us in on the secret to 50 years of marriage?

This most wonderful life is due to my mother and my wife [Camille]. How would I know that this 19-year-old beautiful woman who fell in love with me, and I fell in love with her, would save my life?  She’s seventy years old and still saving my life. I sometimes try to hide from her, though. [Insert classic Cosby laugh.]

LEO: There has been a lot said about your relationship with Richard Pryor. How did you really feel about one another?

BC: First of all, it depends on who you hear. There are some guys that would hang out with Richard, and of course, they had their own agenda and they know I never liked them. I loved Richard, and Richard loved and respected me; and he loved and respected Mrs. Cosby. He was brilliant. I feel he was without the need of those so-called “writers.” But Richard’s behavior was such that the drugs controlled what his thoughts were.

I have no problem telling any person on this earth that Richard was the person who turned things around. Because it’s interesting to me that he and [George] Carlin were both doing things that Lenny Bruce was doing … but neither one of them went to jail for it. But it revolutionized what comedians could do and say onstage, as far I’m concerned.

And one thing that is very important to remember for all of the comics who always use the word nigger; notice I didn’t say to you “the N-word,” did I?

BC: I said nigger. Richard went to Africa, I don’t know why … but then he did an interview with JET magazine and he said, “While in Africa I saw the black people, and I did not see any niggers. And I will never use that word again.”

BC: Very much so!

LEO: You have arguably the most storied and admired career in the history of comedy, but do you have any regrets?

BC: [Sigh, followed by a long pause] There’s a ton of mistakes I’ve made and they will be with me. There is no one regret or regrets, but the beauty of realizing what you’ve done and where you’ve made the mistakes; if you can make those corrections, if you can live and be able to make corrections in how you behave, and what you do – I think that is the greatest gift you can give yourself.