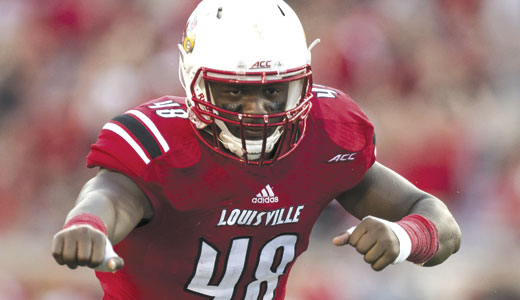 Deiontrez Mount WakePhoto Courtesy of U of L Athletic Department

A pass sails downfield to a seemingly wide open receiver. But from out of – well, from out of somewhere — Louisville safety Gerod Holliman flies in and skies high to pick off the pass.

Whoops! There goes another one. Holliman, who likes to “jump the route,” looking for such opportunities, has chalked up seven interceptions in six games, which leads all college football.

On another play, Louisville’s defensive line puts its shoulders down and digs in for a goal line stand. Syracuse is lined up first and goal at Louisville’s one-yard line, about to score … But whoops! There goes another one, as Cardinal linebacker Deiontrez Mount bursts right through a gap to stop a Syracuse runner before he can take a step.

In another game, a Miami runner rolls to the left and turns on the jets to sweep around end. Sorry, you’ll need more speed than that to escape linebacker James Burgess … POW!

Plays like that happen all over the field these days for the Louisville defense, which … Wait a minute! James Sample just snatched a pass and is running upfield with would-be tacklers just bouncing off.

Louisville’s defensive players seem to have caught a fast freight as the season reaches the halfway point. Until now, the prevailing sentiment has been the Cardinals have sure been lucky their defense has played well, because the offense has sputtered along – but just wait. At Louisville, everybody thinks offense, and who can blame them? Especially with the return of coach Bobby Petrino, who, in a previous stint at Louisville fielded teams that averaged over 50 points a game, and consistently ranked with the top gunslingers in total offense. The primary job for Louisville defenders seemed to be — hold down the opposition as best you can and get our offense the ball back as soon as possible.

That mindset has not disappeared.

“We’ve been battling some injuries and we’re still a work in progress,” says Petrino. “Thank God we have a great defense, because it’s allowing us to get better offensively.”

But the notion is emerging that the big stars of this Louisville team aren’t the would-be scorers still getting it together, but the defenders who’ve got it going. Louisville is 5-1 and ranked with the NCAA leaders in defense, heading into the toughest part of its schedule. The offense might get better. But the buck’s going to stop with the defense.

Many stars of this defense were showing their stuff a year ago when Louisville went 12-1 under previous coach Charlie Strong. The 2013 Cardinals led the nation in total defense. Louisville ranked first against the run, and topped all teams in quarterback sacks. Three of those defenders, Calvin Pryor, Marcus Smith and Preston Brown are now playing in the NFL. But the Louisville defense still has its sting.

“We’re playing marvelous,” says linebacker/end Lorenzo Mauldin, a star of a year ago, who is back for his senior season, with a professional future probably ahead. “This is as good of a defense as it was last year. You know they say that we’re missing a lot of guys, but a lot of guys have stepped up and I’m proud of our defense.”

You know Mauldin. He’s the guy with the red-tinted dreadlocks who chases down quarterbacks — and shakes his locks when he gets one.

Another of the old hands is cornerback Clarence Gaines, who has no stats to speak of because enemy quarterbacks avoid throwing anywhere near him. Gaines began with Strong as converted receiver, joining a group of similarly inexperienced defensive backs. Strong told his guys to wing it: “You say you’re fast. Go cover somebody.” One gets the idea that that just-do-it mentality continues.

The defense has found a high cruising speed under new defensive coordinator Todd Grantham, whom Petrino brought in from Georgia. Petrino says the defenders are fast and physical. “They’re confident in what they’re doing, and that allows them to play fast. And together, too.

Jim Knoer is a Louisville fan with just enough background in high school coaching to make him dangerous, sees it like this: “What the defense is doing is every week they’ve got a game plan and they stick to it.”

Our analyst in the stands says Louisville’s success begins with speed. “They can’t run wide on us, we’re too fast – but can keep the middle bottled up in the meantime.

“We’ve get enough down linemen and they’re all about as good as one another, so when one comes out the guy who comes in is just as good,” Knoer says. “That’s unusual for Louisville. There isn’t any drop off. It’s the first time I ever remember U of L having that.”

The depth also provides a season-to-season continuity. Linebacker Deiontrez Mount notes that he backed up Preston Brown last season. “Now,” says Mount. “I want to do what he did. Be like him and follow in his path.”

Offense on the mend

Of course, Louisville will eventually need for its offense to pick up steam.

The recent emergence of running back Brandon Radcliff has added a spark. Radcliff is one those low-to-the-ground guys who hits hard and doesn’t mind banging off one tackler to bounce past the next. And he seems to have the flippers to move the pinball along.

Petrino likes the poise of freshman quarterback Reggie Bonnafon, but the offensive line has been flagged too many times for false starts. Like they can’t remember the hike number.

Meanwhile, All American-caliber pass receiver DeVante Parker should soon be back from a toe injury that required surgery.

Times have changed. Joe B. Hall was saying the other day on the Joe B. and Denny radio show that Roy Kidd, the famous Eastern Kentucky coach, told him that in his time they didn’t let a broken toe slow them up. Hall says Kidd told him, “We’d just chop it off and go on.”

The second half of the season isn’t going to be easy. Saturday,  Louisville plays at traditional Atlantic Coast Conference power Clemson, where the football stadium is called “Death Valley.” The Cardinals return to Papa John’s Cardinal Stadium for games with North Carolina State (Oct. 18) and No. 1-ranked Florida State (Oct. 30).

Louisville beat Florida State the last time the two teams met in a 2002 game played here in a pouring rain. A game-long deluge. It wasn’t cold. It was kind of warm, actually.A hurricane had blown up from the Gulf of Mexico and when it ran out of wind, just let loose the rain. We remember wearing a raincoat, topped by a poncho, with a hat and snow boots – and still came away wet – but with a 26-20 victory, in overtime. Rain. Wet. Victory.

Two games later Louisville plays at No. 6 Notre Dame. But while everyone is concentrating on the Seminoles and the Irish, Louisville has this little contest in between AT Boston College on Nov. 8. A known upsetter, Boston College. And it’ll probably snow.

The season wraps up at home Nov. 29 against Kentucky. At last, a breather.