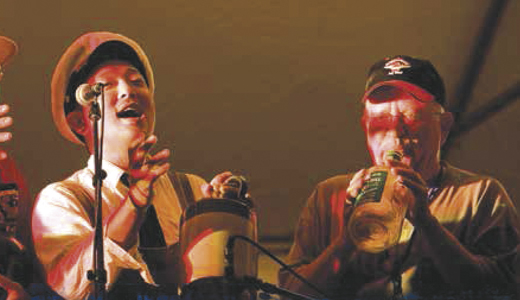 In late September, History Press issued “Louisville Jug Music: From Earl McDonald to the National Jubilee.” For fans of this music, this is something of a watershed moment: Despite more than one period of attention from mainstream audiences, documentation of jug band music has been sparse.

The publication also is a huge milestone for author Michael L. Jones, in a path both personal and professional. This veteran journalist and frequent LEO contributor recently described how his keen eyes and ears focused on jug band music: “When I first heard Robert Johnson’s ‘Hellhound on my Trail,’ it just ignited this obsession with the blues. One of my frustrations was that I felt I had nothing to add to the canon of blues writing. It seemed like everything happened in Mississippi, and everybody had written everything. When I discovered jug band music, it was a corner of blues history no one seemed to know much about — and it happened in Louisville, so I could sort of make it my own.”

At 4 p.m. on Sunday, Oct. 26, Jones will appear at Carmichael’s — along with the Juggernaut Jug Band, a local institution that may have done more than any other single ensemble to keep this music alive in recent decades. And if you can’t get enough of a good thing, Jones also will speak at the Shawnee Library Branch Tuesday, Oct. 28 at 6:30 p.m.

The foursome has long promoted the slogan that it plays “America’s Happiest Music” — and it’s easy to see evidence for that claim as they play near the top of the bill for the family-friendly national jubilee that just celebrated its 10th annual outing in Louisville. Early jazz standards and the homiest (and corniest) chapters of the Great American Songbook typically get an airing, with arrangements featuring novelty instruments (the jug being only the most emblematic — there’s also kazoo, spoons and even combs). But Jones’ book digs back to before Louisville’s popular jug band pioneers were sought to bring backing flavor to artists like Jimmie Rodgers. Using the jug for distorted vocal effect goes back to African heritage — and just as much of the black community left behind the banjo by the middle of the 20th century, so too were the homemade jug band instruments considered something to forsake for social progress. Only remnants of the minstrel acts were left playing these tunes for comic effect. (Earl McDonald, a towering figure in Jones’ book, raised a daughter who was a prominent civil rights champion but couldn’t fully embrace her father’s musical fame.) More recently, the 1960s brought jug music to white musicians and their fans via the folk revival, and only now is there a significant contingent of black musicians (e.g., Carolina Chocolate Drops) adopting the revived music.

Jones recently shared some Q&A about jug band music and his role as its historian.

LEO: How many hours of your work does this book represent?

Michael Jones: It’s really hard to say, since I did it over such a large period. More than 10 years of actually doing the research. It’s got to be thousands of hours. Most of it is reading about the blues, and then trying to connect it to the local history, and tracking down the relatives was a crazy thing.

MJ: My favorite overall is probably “Tear It Down” by The Mississipeans. I actually like the Memphis [-area] stuff ‘cause it’s more country blues.

My favorite Louisville jug band song …  the Louisville stuff is different from the rest of the catalog because of the influence of New Orleans jazz. Here it is: “Skit Skat Doodle Doo” by The Dixieland Jug Blowers.

LEO: What’s the next thing you wish you could find out on this subject?

MJ: There’s an important figure, Clifford Hayes, a longtime partner of Earl McDonald. He was a musician who lived off women and didn’t have a set address, so it’s hard to track him down. Earl McDonald always had a stable job, and you always found him in the city directory — but I only found one census reference to Clifford Hayes.

At a book signing, someone came up to me and said they had a friend named Hayes in Cave City, where Clifford Hayes was born. Turns out there’s an annual Hayes family reunion, and I’ve been invited there to see if anyone remembers Clifford.

Also, The Cincinnati Jug Band is trying to get me to include Cincinnati in a future volume. Jug music — it’s a small niche of people, but they’re obsessed. They want to know everything about it.