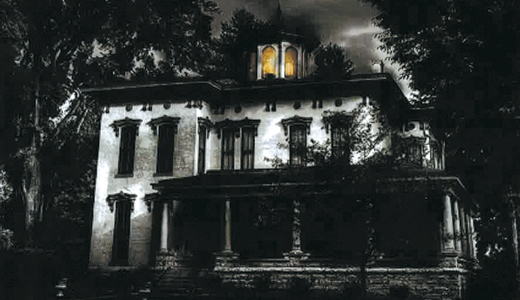 “Haunted Houses of Louisville,” written by Louisvillian Steve Wiser, is more historic than haunting. There’s nothing terrifying or gruesome, just a little spooky. So if you’re looking for a spine-tingling read, this book is not the right choice. However, history and architecture buffs will find some satisfying nuggets of information and some hauntingly beautiful photos by Tim Miller in this book.

There are also some interesting conversation starters to keep in your back pocket until the next event you attend at one of the many popular historic locations Wiser discusses, including the Vogt Mansion, the Brennan House, the Culbertson Mansion, the Seelbach Hilton Hotel, the Belle of Louisville, The Palace Theater and the Peterson-Dumesnil House, whose “Lady in White” ghost story opens the book.

Wiser quotes a staff member who saw the “Lady in White” while catering an event at Peterson-Dumesnil: “She walked through the living room, and we thought she was a guest who stayed late. She was wearing a white dress. We had already locked the doors, we looked everywhere for her, but she just seem to have disappeared.”

And that’s about as scary as it gets — but the “Lady in White” is a good story to save for a group of anxious kids while waiting for fireworks at Crescent Hill’s Old Fashioned Fourth of July Celebration, held each year at the Peterson-Dumesnil House.

Wiser, an architect and historian, focuses as much on the homes themselves and the historical figures who built and occupied them as he does on their ghost stories. He includes interesting historical details about the grand estates’ architects, as well as the ravages of tuberculosis and yellow fever.

As if the threat of death from these diseases of yore wasn’t scary enough, they took their victims to the grave and left us with their ghosts. Waverly Hills Sanitorium is known as one of the most haunted places in the U.S. because of the number of tuberculosis victims whose ghosts are said to haunt this sprawling gothic structure. One of the scarier and lesser-known ghost stories (with an interesting historic tidbit) is that of young Rose, niece of poet John Keats, who died at age 5 of yellow fever.

Keats’ brother George settled in Louisville, where his daughter died and was buried in the cemetery previously located where Baxter Park is now located. Wiser writes that when this public cemetery was relocated, some of the older graves with small headstones may not have been found, and the bodies not reinterred properly with the others at Cave Hill or Western Cemetery.

Rose’s lost gravesite suggests that her desecrated remains may have been left behind at Baxter Park — a thought that gives a frightening aspect to an empty swing in motion — but Wiser suggests that Rose and her “after-life” playmates may have scampered a block west, seeking “a more quiet refuge at St. Peter’s Church, away from all the above-ground recreational activity” at their burial site. Parishioners reported “doors opening and closing without no one visibly doing this. Banging sounds during church services. Lights flickering on and off.”

The book ends with a reference section listing other books, locations and tours in Louisville where you can further develop your repertoire of Louisville ghost stories. Wiser will sign copies of his book on Halloween at Carmichael’s on Frankfort Avenue and then give a ghost talk the next day at the Culbertson Mansion in New