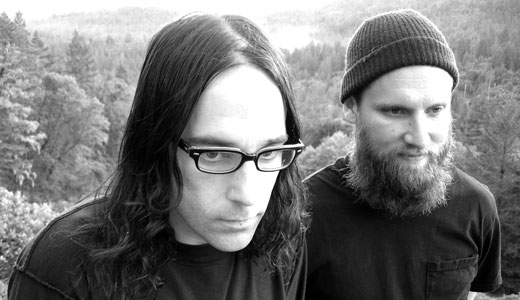 How a band can be both brutally heavy and blissfully peaceful seems like an impossible balance, but one more than adequately met by psychedelic indie rock champions Om. Comprised of original member Al Cisneros, and newcomers Emil Amos and Robert Lowe on drums and guitar/synthesizer/percussion respectively, Om is an economy of language.

The band’s evolution has been slow and subtle, like their music on a macro scale. According to Amos, “There’s a certain amount of foresight an artist can have toward where they are going, but not knowing where you’re headed is also a big part of keeping your own engagement in music alive and real. I think feeding our curiosity and will to push our own music forward is a big part of maintaining our own sense of sanity and stability in the world.”

From their name alone, it’s clear that there is a spiritual quality to the band, made all the more apparent in their music, which often incorporates drones and repetition for something hypnotic and meditative. For Amos, “The more Western culture has moved away from spiritual concerns the more exotic they become.  People will always come back to art that helps them feel good and engages them in life and maybe a kind of trance music vibe offers a kind of immersion.“

Inundated with questions regarding said spirituality, Amos and company take it in a good-natured stride. He explains, “It’s kind of a shame that ‘spiritualism’ in music strikes people as so foreign these days, when music originally often came from that place, whether it was gospel-based or Gregorian chanting, etc. Art performs such a huge form of therapy for everyone in general that I think the history of music enhances our love for the human race in an essential way. “

Having traveled the world, where to next? Amos muses, “We’ve talked about filming on top of Mayan Ruins or traveling to India but we’ve always been a little too busy making records to put down everything and go do it.”

Check Om out here this Wednesday with Watter and Shedding at The New Vintage. Show is at 9 p.m.. 21+