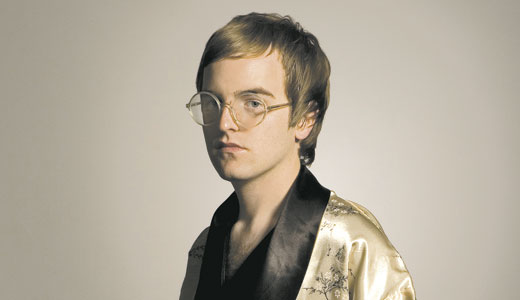 Dent May makes the kind of chilled-out indie pop that scratches that perfect summertime itch. Hell, it’s really perfect for anytime you want to listen to something with a good hook and isn’t afraid of showing its pop influences, or to lean into the kind of AM fun times that bands like Animal Collective or Grizzly Bear have mined over the last decade. Dent May is in good company.

No wonder, then, that Paw Tracks, the Animal Collective-run label, picked him up. May recalls, “We were friends before they heard my music. They’re obviously one of the great bands of our time, so it was a wonderful coincidence we ran into each other.”

A former film-school student, May sees the relationship between film and music as “a means of escape for me growing up in Mississippi. It was a way for me to encounter worlds that were so far beyond my grasp. My desire to be an artist very much originates with this childish pursuit of fantasy. How can I realize the impossible? I eventually focused on songwriting, because it felt more personal and more immediate at the time. I’m working on some film stuff that may see the light of day in a very, very long time.”

And May keeps busy. Slowly working on his next album, which he hopes to see released next year, he is a thoughtful composer. He explains of his work environment, “I do feel like music is in dialogue with the space around it, not just in a cultural and geographical sense, but in a spiritual sense as well. Architecture, furniture and various objects influence my music a great deal, which is why I’m a bit of a minor hoarder. My workspace is super cluttered with all kinds of sentimental knickknacks.”

For May, a good show is simple, he explains: “Ultimately, I’m an entertainer. I want the audience to have a good time and escape from the monotony of daily existence.”

You can catch Dent May, courtesy of the We Listen For You blog, this Sunday with Andrew Rinehart and Ted Tyro at the Haymarket Whiskey Bar.