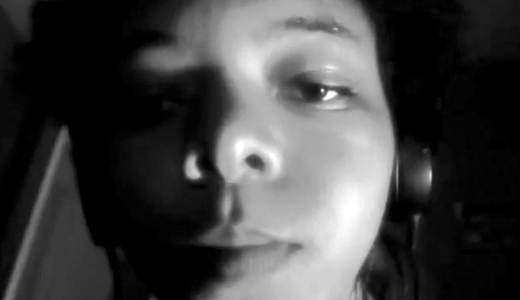 The concept of minimalism in music is surprisingly broad, ranging from the evolving compositions of Steve Reich or Philip Glass to the stripped-down fury of bands like Shellac. For Cher Von, that minimalism is about as bare-bones as you can be, bordering at times on musique concrete more than anything compositional. Somehow, though, Von imbues her efforts with a sense of playful whimsy, more exploratory than academic in her approach, and certainly keen to creating spaces of abject beauty.

It makes sense, then, to title the album “Gol.” Von explains, “’Gol’ means ‘bare, stripped,’ which made sense to me, given how simple the production and content is. I do think a lot can be conveyed in wordless singing; it can sometimes be even more emotional and revealing than painting a picture with words.”

Von expounds on her newest, saying, “’Gol’ is a 25-minute minimalist piece that came from improvised recording sessions. I had decided after releasing ‘Klik. Klak.’ earlier this year that I wanted to delve deeper into minimalist concepts in music, and felt the best way to do that was to limit the amount of instruments I used, the amount of layering, and leaving it as bare-boned as I could.”

Given that, the compositional process is meditative. “With this music, it isn’t very important to do that and isn’t always possible,” Von says. “There are moments on ‘Gol’ that I couldn’t recreate if I tried because I can’t will myself to go into the headspace I was in to get there and want it to remain genuine. Improvisational music can be beautifully fleeting.”

That her music takes such an unconventional path, Von notes, “I hated how hard it was to find the music I enjoyed the most in the first place; there was always a bit of reluctance to get too abstract. I’m very happily going exactly where I want to go with music these days.”

You can find “Gol” online or in local record stores, and watch for Cher Von to play in town again soon — and in good company, as she often does.