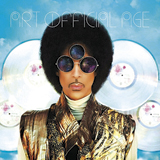 Like David Bowie or Björk, Prince has a talent for keeping his ear to the ground and presupposing new trends, feeling out with some accuracy what might come next. It’s a tough line to walk, though — one that could either be seen as derivative or pandering, and one that wants to stay fresh in perpetuity. For Prince, I’d argue the latter, even if he revisits tropes common throughout his career: Prince will never let you forget how funky he is, so deal with it. The difference with this outing, and what is immediately apparent, is the amount of new-school R&B influence on the album. Prince isn’t afraid to pitch his voice even higher, like in the track “FunkNRoll,” or lean on super-chill, kind of nuevo-Stevie Wonder riffs as heard on “Breakfast Can Wait” — all of which makes for a wonderfully clever affair.