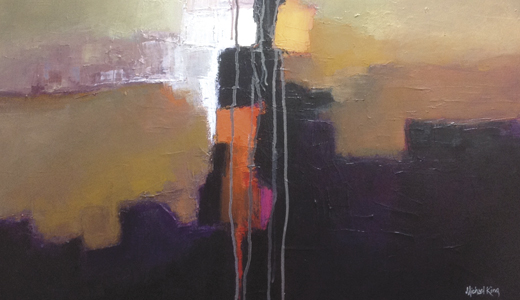 Abstract art’s nickname is “I don’t get it.” This possible disconnect between art and viewer can keep it at arm’s length. It doesn’t have to be that way. Perhaps the over 20 contemporary artists in “Abstract in Kentucky” will help fix the problem.

It’s the lack of a recognizable subject that’s the issue. Abstraction varies from a slight distortion to just colors and shapes. It does require more from the viewer than, say, a cottage with the interior ablaze.

Abstract art has been around for a while. A case can be made that Impressionism started the ball rolling in the 1870s, but it’s safer to say the 20th century. Without anything representational, an artist has to learn to convey emotion and meaning through line, color, texture or shape. That’s hard to do and is the opposite of “my kid could do that.”

“Abstract in Kentucky” features a variety of media. One of the more figurative pieces in the exhibition is “Intermission” by Robert Halliday. Made of Plexiglas boxes, the wall hanging features a grid of geometric-shaped talking heads. Use this as a stepping-stone to the more nonrepresentational items, like Marguerite Rice’s “All the Cool Cats Watch TV.” She yields her pastel sticks with such fervor that the saturation of color looks like paint.

Beverly Glascock’s small PVC object, “Jam-Pack,” is just begging to be made big. As outdoor public art, we would be able to walk around the red tubing to mentally unwrap the knot that is the sculpture. Glascock also created a work that had me searching how cast marble is made. (As it turns out, it is crushed marble powder combined with a binder that is then poured into a mold.) Her cast-marble “Eclipse” is a stylized crescent resembling dark concrete.

William Kolok’s “TexScape” is an angular limestone statue that’s well placed near the window so viewers can peer through the openings that run throughout its surface. The pinewood “Chandelife” by Luke Seward hangs from the ceiling, functioning both as sculpture and chandelier.

Gallery owner Craig Kaviar has a couple of works in the show, including “Abstract Nude No. 2.” The copper repousse relief is suggestive of a woman’s torso. Gallery manager Kayla Bischoff is also included, displaying the triptych “Synapse Maps II,” its lines burned onto maps.

Acrylic paint, another 20th century invention, lends itself well to abstraction. Excellent examples include Michael King’s “Significant Incident,” with its use of line to dissect blocks of color, and “Scratching the Surface,” a color field of complementary orange and blue hues by Tammie Demessie.

While there’s not a lot of fiber art and ceramics, what’s there certainly fits the abstract theme. “Wave,” by Tonya Vance, is shaped like an undulating underwater creature in felted wool; all that’s missing is the ocean. Another organic form, “Things Are Not Always What They Seem,” is Cheryl Ulrich-Barnett’s textured ceramic of … something. I’m at a loss at how to describe it. And that’s the beauty of abstraction.

The artists’ reception is during the October 31 F.A.T. Friday Trolley Hop from 6 to 9 p.m.