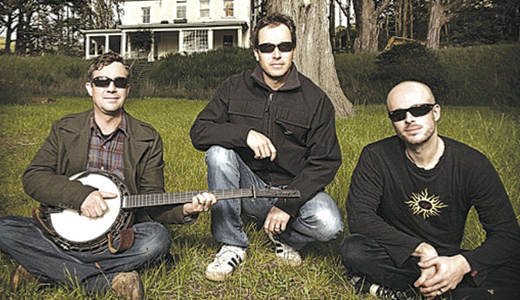 Yonder Mountain String Band went more than four years before following up its 2009 album, “The Show,” with a four-song release, “EP 13,” last fall. According to banjo player Dave Johnston, releasing EPs with small groups of songs might well become the preferred way Yonder Mountain releases new music in the future.

The three band members — Johnston, guitarist Adam Aijala and bassist Ben Kaufmann, as well as mandolin player Jeff Austin (who left the group in April, but recorded on “EP 13”) — are older now, and three of the four have started raising families. As Johnston explained in a recent phone interview, that means some things have changed when it comes to the priority they place on writing and recording music versus touring and spending time at home.

“We all have families or obligations at home, and things have changed on that front for all of us, so that it feels like there’s not a whole lot of time to spend in the studio like the way it had been in the past,” Johnston said.

“EP 13” is the result of an experiment to try to address the challenge of how to find time to make new music. Last year, the group took a few days off while touring to visit the Electrical Audio studio in Chicago and record the four songs.

“We wanted to see if we could get something done on the road to see how viable any of that would be,” Johnston said. “And it turns out it’s good for about four songs.”

Up to now, though, Yonder Mountain String Band had stuck to the traditional approach of releasing full-length albums — nine of them in all over the course of a 15-year career.

The first of those releases, the studio album, “Elevation,” arrived in 1999. The group has gone on to release four other studio CDs: “Town By Town” in 2001, “Old Hands” — a collaboration with Colorado songwriter Benny “Burle” Galloway — in 2003, a self-titled album in 2006 and “The Show” in 2009. Interspersed between those records have been five live albums, “Mountain Tracks,” volumes 1 – 5.

The self-titled album and “The Show” marked a significant shift in the group’s approach to its music. After self-producing its earlier albums, Yonder Mountain teamed up with producer Tom Rothrock (who was known for his work with rock acts like Beck, Foo Fighters and Elliott Smith) and decided to add a notable instrument to its music — drums (played by Pete Thomas of Elvis Costello’s band, the Imposters).

Nevertheless, Yonder Mountain returned to its drummer-less roots on “EP 13.” Each band member wrote and sings one song on the EP. Kaufmann’s “Straight Line” opens things at a relaxed pace, with Johnston’s banjo taking a prominent place in accompanying a vocal melody that sounds a bit like a rootsier John Denver. Johnston’s “Don’t Worry, Happy Birthday” strikes a similar tone with its rolling banjo line and Johnston’s earthy vocal. Austin’s “Rag Doll” is a bit more stark and edgy, although his melodic vocal softens things a bit. Aijala’s “All The Time” closes things out on an energetic note and is the closest thing to a traditional bluegrass tune on “EP 13.”

Recorded quickly and mostly live in the studio, “EP 13” provides a good picture of how Yonder Mountain sounds in a live setting.

“Part of the charm of what we do is we don’t really have a plan,” Johnston said of the live show. “We don’t have things set in stone and we have a lot of moving pieces and our offense calls [for] a lot of audibles. So we kind of are sticking with the same game plan we’ve always had, which is changing and moving set lists.”