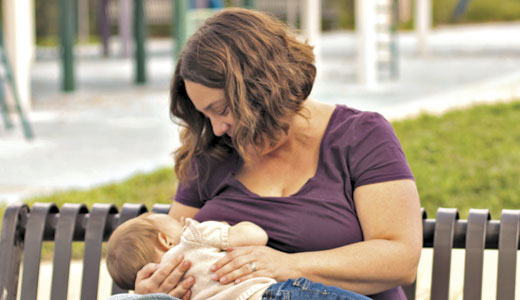 In recent months, there have been numerous stories of women being shamed and asked to breastfeed in private or to cover up, despite the laws in most states providing protection for breastfeeding in public. Two recent and local examples of persons misunderstanding the legal right of mothers to breastfeed come to mind. In early July, a mother visiting Kentucky Kingdom was asked to move somewhere more discreet. At first this seemed to be the ignorance of young workers, but later examination proved that it extended to the company’s written breastfeeding policy, which has since been changed. The company’s CEO, Ed Hart, later issued an apology and correction to their policy.

The other incident involved Courier-Journal food writer Nancy Miller’s review of the Highlands restaurant Palermo Viejo, in which she wrote, “I wish the nursing mother at an adjoining table would have thought to bring a cover-up or would not have assumed that other diners would welcome being that close to what is undeniably a natural and loving bonding experience.” While Miller was rude to publish her sentiments ignoring the rights of the mother and her baby, she did nothing afoul of the law. She simply expressed her personal opinion, a sentiment shared by many.

Americans are notoriously averse to the public body, unless that body is selling a largely unattainable image and idealized sex in the form of perfume or lingerie. Outside of this, real bodies that are fleshy and imperfect are covered, lest onlookers recoil in disgust and make rude comments. This issue extends to the lactating breast. In Kentucky, the law says:

“… a mother may breast-feed her baby or express breast milk in any location, public or private, where the mother is otherwise authorized to be. Breastfeeding a child or expressing breast milk as part of breast-feeding shall not be considered an act of public indecency and shall not be considered indecent exposure, sexual conduct, lewd touching or obscenity.” (Kentucky 211.755 [1])

It also states: “No person shall interfere with a mother breastfeeding her child in any location, public or private, where the mother is otherwise authorized to be.” (Kentucky 211.755 [3])

In all, 46 states have laws explicitly allowing breastfeeding in any place, public or private, without fear of falling under a public indecency law.

Furthermore, breastfeeding, whether by mother or wet nurse, has historically been the preferred method of feeding an infant. If neither the mother nor wet nurse was available, animal’s milk was the next best thing. I believe that this is one part of the issue with breastfeeding and the public breast. After reading several articles about breastfeeding and public perception, I am convinced that much of the discomfort comes not from the breast itself or the feeding infant but from the confrontation with our basic animal nature and issues with overall embodiment. Much like the backlash against evolution, many are especially sensitive to any idea that frames humans in the same view as an animal. Somehow, we believe that our “humanness” and ability to reason remove us from the realm of creature and that our bodies somehow transcend their own functional capacities. In her article, “Things (Not) to Do with Breasts in Public: Maternal Embodiment and the Biocultural Politics of Infant Feeding,” scholar Bernice L. Hausman says of the debate, “Breast versus bottle is very much beside the point — breastfeeding controversies are about women’s rights and their empowerment as mothers, and, as a result, public representations of infant feeding always concern the politics of maternal embodiment.”

I decided to breastfeed for two reasons. First, it was the most economically sound choice for my family. For three years, I’ve taught and freelanced. There isn’t much room for medical leave — much less the loss of income — so saving those precious dollars on formula was very important. I also knew that it was the best for my son. He would have a better start if I gave him, at the very least, my antibodies — which, after years of me working at a daycare, are like tiny germ machetes.

Unlike me, my dear friend, Melissa, who was the first of my maternal friends to breastfeed around me, chose attachment parenting, which includes feeding on command. Melissa’s breast comes out when her babies demand it. Even still, she does not want her body scrutinized or exposed. She overcame her fear of exposure as the need to nourish her infants took precedent. Over time, she felt increasingly passionate that the act of breastfeeding publicly was an important and necessary event to continue the process of normalizing breastfeeding for all mothers.

The first time Melissa fed around me, I was slightly concerned about someone approaching and asking her to stop. I wasn’t bothered but was sure that someone else might be. In the three years that Melissa has had children, I’ve rarely noticed anyone paying attention, and never has anyone attempted to modify her behavior.

Melissa and I met with our broods at the Waterfront playground on a rare cool summer day; we talked about breastfeeding. We often frame our lives as feminists, so as two sides of a feminist coin, we approach breastfeeding differently — but we are more aligned than not.

Melissa decided to breastfeed when she made the choice to attempt a natural and drug-free childbirth with her firstborn. “I think the idea was reinforced by the Bradley Method [birthing] classes,” she says. “One of my big concerns with Elliott, when I wasn’t able to have him naturally, was that he was going to have issues breastfeeding — but he was a champ.” She has since delivered her second child, a daughter, Emerson, whom she is feeding as we sit down to talk.

My attempts to breastfeed my son presented a different challenge. When I entered Clark Memorial to have him, I was induced and subjected to several interventions before being told I needed a C-section. I was tired and just wanted to meet my son.

When it came time to breastfeed, my experience with the lactation consultant was less than ideal. She was not encouraging but pushy, and I didn’t feel as though I was given the opportunity to let Lawson find his breastfeeding position naturally. I was also very sick from the anesthesia. In brief, we weren’t off to a great start, and my concern was that he was fed by whatever means necessary.

“I read about all of these moms who have trouble and I’m thankful,” Melissa continues. “David and I talked about it before I got pregnant. He bought into a lot of the statistics about the cost of raising a child, and it was my quest to show him that it doesn’t have to be as expensive.” When we talked about breastfeeding in public, Melissa offered two hilarious analogies — one that seeing someone breastfeed is like watching a car wreck. The viewer isn’t particularly horrified or put off but entranced to the point of staring. As well, the interest piqued by a breastfeeding mother causes most people to confront the realities of human nature. For the second anaology, she says, “It’s like when you put it all together and think, oh yeah, my parents had sex and that’s how I got here. You don’t want to think about that, but you don’t have a problem with sex because you’re an adult.”

This raises the issue of why our own mothers were discouraged from both breastfeeding and natural childbirth. For years, Melissa attributed her intelligence to the assumption that she’d been breastfed. When she found out that she hadn’t been, she was comforted by the fact that formula worked fine for her brain development. My mother wasn’t interested in having a baby hanging from her breast; I’m sure part of the issue was that she didn’t want to start wearing a bra. (It was the ‘70s.)

Melissa feels thankful that she resides in the Highlands, an area where it is not unusual to see a mother breastfeeding and finds comfort in participating with lactation groups in addition to other parental support meetups. Her struggles with private/public feeding come more often when in the private space shared with family. “There are certain family members that I’m uncomfortable breastfeeding around,” Melissa says. “It goes back to the fact of motherhood being isolating. Everyone is together celebrating the baby, but I’m in another room alone because I’m uncomfortable.”

What is a mother to do? The struggles to reclaim womanhood during the physical acts of maternity continue. There is no single answer and no single solution to the discomfort that some feel when they are confronted with the female breast. There are those who dislike any amount of flesh, and some find the act distasteful. Perhaps it is a fear of fluids or a fear of recognizing the baseness of our being. Whatever the issue, breastfeeding is best for the child, protected under the law and not likely to disappear.

“My bra gets hot and itchy, and if I decide I’m just going to take it off right there in the middle of the restaurant … well, people would find that odd. My boobs are just as natural as a nursing mother’s and any flesh seen would be a means to an end, but you have to admit, it’s just not something that’s normally done in public.”

“I never breastfed in public. I fed in private places, at home or in the car. I don’t mind seeing someone breastfeeding, but I always wonder why the mom doesn’t prefer more privacy. I am a little uncomfortable when I see it. I’m not sure if I’m supposed to oooh and ahhh over the baby or look away.”

“Personally, I just don’t like breastfeeding. I will do it for a while because I know it is what is best for baby, but I feel no extra ‘bond.’ It comes down to being selfish … why totally wear myself out breastfeeding when I could focus my energies and attention elsewhere? When I see other women feed in public, it does not bother me in the least. In fact, I think it’s a very beautiful thing — just not for me.”

“I am ALL for public breastfeeding. Mothers shouldn’t have to worry about what others think. They shouldn’t have to go feed their baby in a disgusting public restroom. I know in other countries people wouldn’t even think twice about seeing a mother breastfeeding her baby, but in the United States, people get so mad. I certainly don’t understand, though, why people are grossed out. If it was the norm and people could see babies being fed in public more, I think these feelings would go away.”

Jamie Colvin (mother of one)

I was breastfeeding on demand, so I nursed in public quite a bit. Most of the time, I wore a cover because I was shy about it and didn’t want to deal with unwanted attention. As time went on, the cover became more trouble than it was worth. … I realized that nobody was paying any attention to me and, if they were, I didn’t even notice. Since then, I haven’t really used a cover in public. I am not doing it to make a statement about breastfeeding in public and whether or not women should cover up. I am doing it to feed my child when he is hungry and provide him comfort when he is tired, hurt or upset.

Tarrah Chieffi (mother of one)