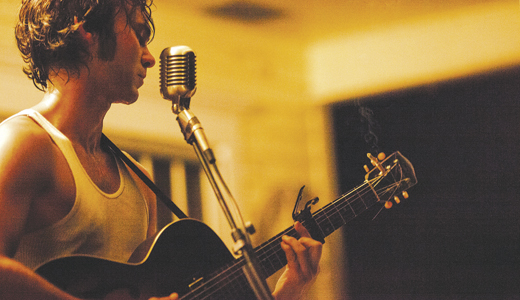 Known for his suitcase drum kit, raw  and rootsy guitar playing, and the sort of energetic performances that have made him steadily become one of the most talked-about members of the neo-folk scene, Alejandro Rose-Garcia — better known by his moniker Shakey Graves — is a raucous one-man front-porch-style wrecking crew. He is also a subtle, introspective songwriter. And an actor: He was in the recent “Sin City” sequel, among various other projects. So, before he comes to town to play the official Avett Brothers after-party at the Mercury Ballroom on Friday, Oct. 17, we decided to catch up with the multi-talented Texas native for a quick chat.

LEO: How did you come up with the moniker Shakey Graves?

Alejandro Rose-Garcia: I had been looking for something outside of just my name to put my music behind. When I would record, I would — not necessarily try to make it not sound like me — but I wanted to make it sound more open-ended than just a “me” project. I had read a story about how Jeff Buckley, once “Grace” had come out, he wasn’t really able to play the same size rooms, which he loved playing, so he went on a ghost coffee shop tour and he essentially went out and named himself something different every night and kind of let the music speak for itself. So I was pretty impressed by that and just had kind of been hunting for a moniker. I was at this music festival outside of Austin called Old Settler’s and was kind of just chilling out and this dude — I’m pretty sure he was tripping on LSD — came up to us and was talking nonsensically. A crazy conversation. We talked to him, as much as we could, for a little while. It took a while, but he went to head out, he said, “OK … man … you guys are awesome … I’m gonna head out … rahrahdablahblah … spooky wagons.” And we’re like, “Oh, gee, did he just say ‘spooky wagons’?” So, we named one of my friends Spooky Wagons, I got named Shakey Graves, another one got Spinster Jones and Solomon Doors. And Spooky Wagons’ little brother fell asleep in a tent, so he got Droopy Wieners for punishment for sleeping on the job. And that’s everyones favorite nickname. I should have taken Droopy Wieners.

LEO: It’s been a few years since you dropped your first album, “Roll the Bones.” With heavy touring — and that being kind of the predominant way to make a living as a musician these days — is that the reason it’s been a while since the last studio record? Or did it just kind of pan out that way?

AR-G: A little bit of both. The majority of my recordings came from when I didn’t have any shows to play or anything to do. The lack of engagement really pushed the creation. And the way I was doing it, there wasn’t a lot of people watching in a pressured manner. So, I would sort of write and make up and adapt and do everything as I went along. It’s pretty fun.

LEO: Esme Patterson harmonizes with you on a couple tracks on the new album. Your voices complement each other well. How did you start working with her?

AR-G: It’s kind of a coincidence. We went on a tour, we both did. Before that, I had been going out with Shovels & Rope for a couple months. And I had just fallen in love with their whole thing. I was just really taken back by the guy-girl duet thing. And, kind of coincidentally, when Esme and I were around each other — she’s always writing — so I joked around and said, “I got this weird song …” and we wrote “Dearly Departed” in under an hour. And everything we’ve done since then was unreasonably natural. It kind of shocked both of us.

LEO: You seem to have a wild amount of influences in your music, but what are you listening to — or kind of into — right now?

AR-G: Lucius and tUnE-yArDs. Shovels & Rope. We’ve been seeing so many bands lately. Sometimes, it’s been bands you kind of take for granted. I got to see Queens of the Stone Age for the first time this year. I just assumed they were some band that people at work listened to, but, no, they’re totally insane. One of the craziest rock bands, period. And all sorts of stuff. With platforms like Spotify and shit like that, everything is just a weird mix tape. I’m listening to Ghostface Killah, then old country music, then Katy Perry.