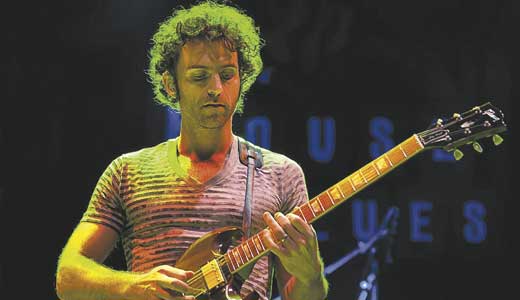 Of the many iconic musicians to emerge from the 1960s, perhaps Frank Zappa was most unique. He had an advertising background and a love of music that ranged from doo-wop to jazz to modern classical, leaving a vast body of work. Carrying on this legacy might seem daunting, but his eldest son, Dweezil Zappa, presents a multi-faceted approach to it through his project “Zappa Plays Zappa (ZPZ).” He took a break from teaching at a guitar camp in (perhaps ironically) Montana to speak with LEO. Preliminarily, he spoke of the master classes he gives while touring. “I take about 90 minutes, open to all skill levels and ages, I try to teach some things that have been influential and game-changers for my own playing as I’ve studied my dad’s music and worked it into ways do to more improvisational things. There’s a few exercises I show to give people view a new way to view the fretboard.”

Dweezil then discussed choosing the tour repertoire, given the vast choices available. “Each tour is really different. We’ll try to play a few songs we’ve never played before. One of the keys to making a balanced show is knowing that there will be a certain group of people that are expecting a few fan favorites, and some people who have never heard the music at all and everything’s brand new; then there’s the diehards who want to hear some stuff that’s pretty deep in the catalogue. With those three categories, we try to find some things that we’ve played – we rotate some things in and out of the show, but it’s always looking to give a broad perspective of the totality of his compositional style. We mix up all the eras, so you get some Mothers of Invention stuff, some 70s and 80s, but it can change each night depending on how we feel. Things depend on how the energy of the night is going. You can get a sense of how the audience is feeling. . . .We have some things we can move around, and sometimes we’ll give the audience a choice – the ‘Applause Meter.’”

“A lot of the music my dad wrote had strict themes, written to be played a very specific way. But in those songs, there’s usually a wide-open improvisational section. So when it comes to the form, we’ll play the strict written parts as they’re meant to played, like a repertory ensemble. Then when it’s the improv stuff, we truly improvise. As far as my own improvisation, the only difference for me is that I do tend to learn a lot of phrases from some of my dad’s guitar solos . . . that are well known. I learn enough to use them as guideposts and make it be evocative of that era or that particular version of that song. So then if I have these guideposts, I can answer them with some of my own phrases.”

“All of [his] music is such a challenge to play as it’s written. But it’s also carrying on a family tradition, which is important to me. By analogy, an orchestra’s job is to carry forward the work of composers from the past. Their job is to play it as it’s written, so people can appreciate what it was. So you wouldn’t hear an orchestra playing a Beethoven symphony and bringing a rapper out [Dweezil then mock raps “yo Beethoven”]. I don’t make any additions to modernize Franks’s music, but when it comes to the improv, that’s really an open canvas. I intentionally try to imbue my own playing with a lot of the characteristics and phraseology of my dad’s playing, so I’m able to pull people into the picture, and have them recognize ‘Oh, that’s this era, this is this version, here’s some familiar things, here’s where it takes a detour;’ I think that comes across.”

The current ZPZ lineup, is posted online, without guests from Frank’s bands. The first two years, ZPZ included alumni, a compromise between Dweezil’s intention to have his own band and the promoters’ desire to have recognizable names. Now, it’s just the core band, which is what he wanted the whole time.

Given the musical challenges, Dweezil discussed rehearsals, saying “typically they’re shorter than I’d like, maybe 2 or 3 weeks before a 1-2 month tour. The first tour, we had 3 months of rehearsal just to get up on our feet. We’ve been able to maintain a lot of the material, so it’s less time to rehearse now. But my dad used to rehearse 2 or 3 months even if the tour was only a month long.”

He closed saying “There’ll be some other surprises. I’m pulling out some guitar instrumentals, some of Frank’s signature pieces. There’ll be some other surprises with some things from the 60s. It’ll be fun, and a good cross section. Over the years we’ve seen a lot younger people coming to the shows. My original goal was to entertain the core fans who have supported it for years, but we wanted to have the younger generation to be exposed to it and inspired enough to carry it forward.”

Purchasers are encouraged to bring their own guitar

Concert admission is NOT included