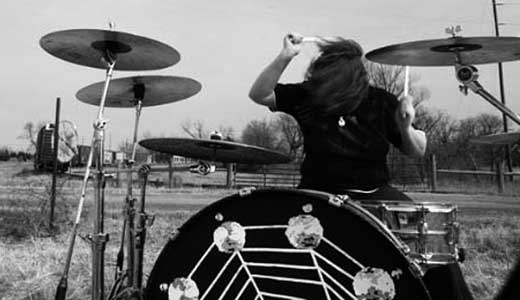 Angela Smith has ostensibly written a book about women drummers; she has actually written a short history of American rock, jazz, blues and country. Spotlighting women drummers offers insights into the struggles and sexism faced by many. She describes the scope of the book well in her introduction: “The focus here is not on classical music, drum circles, or drums used in a spiritual or goddess context. * * * Instead, the emphasis is on women who over the past sixty years have been at the top of their class in popular [music].”

Smith provides a condensed overview of women in music, from thousands of years ago up to the early 1900s, noting the importance of women drummers in Africa and Asia dating back at least 4500 years. She documents the early Christian ban on women singing or playing instruments (526 CE), briefly tracing the slow growth of acceptance of women musicians in Western culture through the end of the nineteenth century, pointing out that certain instruments (especially percussion) were considered “unladylike.”

During the 1930s Swing Era, women in otherwise male bands were primarily singers or pianists. The major exceptions were the “all-girl” bands of that period, which arose out of a combination of necessity (men wouldn’t hire women) and novelty. The best known was The International Sweethearts of Rhythm, also the first integrated group of women musicians. Their drummer, Pauline Braddy, was dubbed “Queen of the Drums.” As America moved into the ’40s, some female musicians found work, because many males were in the armed services. Viola Smith, now 102, is given more space (8 pages, plus other mentions) than anyone else.  Known as the “Female Gene Krupa” for her work with the Coquettes (check their youtube clips), she was not only a superlative drummer, but also a strong advocate for women musicians, writing a 1942 editorial in DownBeat arguing that “‘hep girls’ could sit in any jam session and hold their own.”

The years following were hard for women musicians, with few in visible spots as R&B and rock’n’roll dominated the airwaves. Early 1970s found Fanny breaking the mold, deemed to be the first all-female rock band to achieve renown. As the book moves forward in time, barriers seem to be not so much smashed as eroded, with Karen Carpenter and Sheila E. achieving prominence. The final fourth of the book focuses on the genres of country, blues and jazz. Although Louisville’s own Jyn Yates, the book’s featured “cover grrl” is in the country chapter, her eclectic approach to drums finds her more often in a rock context.

Chapters are devoted to successive eras, each with succinct overviews, followed by drummer profiles, many based on Smith’s interviews. Many of the profiles are only a few paragraphs, so that the reader must slow down to keep track of “who’s who.” Other segments can be a bit hard to follow, as some of the profiles are broken into two or three headings, and it takes a moment to realize that some new headings are actually continuations of the text before, while others do initiate new subject matter. A quibble: while “all-girl” made sense when used in historical context, its frequent usage regarding more contemporary aggregations feels odd. One constant theme that transcends gender or genre is that drummers must serve the music and be part of a greater whole. Overall, Smith has done an admirable job in bringing the accomplishments of women drummers to the fore.