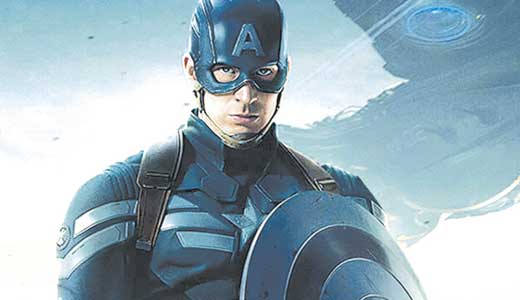 CAPTAIN AMERICA: THE WINTER SOLDIER
2014; $29.99-39.99; PG-13
With NYC in ruins after “The Avengers,” we find “Cap” Steve Rogers (Chris Evans) adjusting to modern life in the nation’s capital – and despite all our proud talk, he sees his nation involved in things that it shouldn’t be. When Nick Fury (Samuel L. Jackson) is killed, Cap allies with the Black Widow (Scarlett Johanson; who wouldn’t?), and The Falcon (Anthony Mackie), but he alone must face his most formidable enemy, a man with a curious tie to Cap’s past. Smart, exciting, deep, and torn from today’s headlines, this movie is a complete knockout, the greatest superhero movie of our day.
STAR TREK COMPENDIUM
2014; $33.98-44.98; PG-13
A very welcome Blu-Ray edition of both J.J. Abrams-helmed Star Trek movies – including the first-ever video release of “Star Trek: Into Darkness” with the IMAX scenes intact and properly framed! Includes two very full disks of bonus material, one for each film, much of it never before seen. Attention: This is the set you’ve been waiting for. ‘Nuff said.
Other DVDs of Interest
FED UP
2014; $29.98; PG
Back in the 80s, America’s food industry began a campaign of misinformation about what constituted a “proper” diet. Thirty years on finds us the unhealthiest society in the history of Man, with diabetes and heart disease long past epidemic levels. If you are reading this sitting down, you probably have one of them, if not both, and don’t even know it. And they are going to kill you. This doc clearly explains the obvious – we have to stop this shit! – and clearly identifies what you can do to right this second to dramatically improve your health, longevity and state of mind. For the love of your family and friends, please check this out.
GODZILLA 2000
2000; $6.98-14.98; PG
Not to be confused with the recent Godzilla reboot (debuting on video next week) this is a welcome Blu-Ray release of one of our favorite Gs. Why favorite? Because after a series of CGI-heavy outings, the filmmakers wisely returned to the tried-and-true all-“suitmation” spectaculars we love – and because it has a 60-million-year-old UFO shaped like a human nose! Also new to Blu-Ray for cheap: “Godzilla Against Mechagodzilla/Giant Monsters All-Out Attack,” and “Rebirth Of Mothra I, II, and III.” Enjoy.
I’M A PORN STAR
2013; $24.98; UR
A shallow look at the Gay porn industry in America, focusing on the many average guys/girls/etceteras-next-door who call it employment. There are an estimated 370 MILLION porn sites on the Web, most of which can be found in our browser history, generating over $13 BILLION in sales annually (according to our Visa bill). Interestingly, Gay porn pays much better than straight porn, leading many straight actors to switch teams – on film, at least – a situation referred to as “Gay for pay.” Also interesting: Amazon seems to have quietly pulled this product from its shelves.
MONIKA
2012; $26.98; UR
A trippy, old-school grindhouser starring the redoubtable Cerina Vincent (“Cabin Fever,” and a former Power Ranger) as a temptress out for revenge. Her tool is pretty-boy TV-face Jason Wiles, a disturbed young man on his last legs in a run-down Vegas motel. She drops her pants and everyone cheers. The End. What? There’s more? Oh, yeah: She was supposedly already dead at the time. Lots of colorful, smelly confusion with help from C. Thomas Howell, Tim Thomerson, and several soap stars, combining to create a very watchable no-budget steamer.
PROM NIGHT
1980; $22.98; R
Jamie Lee Curits, who became America’s favorite Scream Queen in 1978’s “Halloween”, followed it up in 1980 with “The Fog,” “Terror Train,” and this wonderful little howler about a mad slasher planning a bloodbath at the HS prom. It so revolted critics and theater owners that it was banned in scores of cities in America and most of Europe – making Jamie an international superstar in the process. Surprisingly available only now on Blu-Ray, complete with a treasure-trove of fun bonus goodies, it co-stars Leslie Nielsen (from the same year he made “Airplane!”) and vintage Euro-erotica vet Antoinette Bower.
PUMPKINHEAD
1988; $8.98-29.98; R
Lance Henriksen co-stars beside one of effects-master Stan Winston’s most brilliant creations in this tale of hillbilly retribution and backwoods witchcraft, finally available in a Blu-Ray Collector’s Edition, resplendent in exceptional bonus goodies. Inspired by a poem by Ed Justin that starts, “Keep away from Pumpkinhead, Unless you’re tired of living, His enemies are mostly dead, He’s mean and unforgiving.” Truly one of the greatest horror/monster movies ever made, and a required element of any video collection.
TAMAKO MARKET: COMPLETE COLLECTION
2014; $49.98; UR
Tamako leads a very full life: a new high-school student and the oldest girl in a family that owns a busy food shop, she must balance schoolwork, a job, siblings and lots of friends. Then in walks a 2-foot tall talking bird named Dera, a mysteriously insightful creature which soon grows too fat to fly. As Tamako learns to overcome her shyness (and notices that a certain boy has a crush on her), Dera gives her gentle, comic advice, which generally ends in chaos and embarrassment – and personal growth. A great kid-friendly anime.
THE MIDNIGHT SPECIAL
2014; $53.98-59.98; UR
We were musicians once, and young. And in those days there was no TV rock music that wasn’t staged, lip-synched BS. Then Burt Sugarman launched “The Midnight Special,” and for the first time we got to see true performances by Tom Petty and the Heartbreakers, the incomparable Jim Croce, a young Aerosmith, Fleetwood Mac in their “Rumours” era, The Doobie Brothers before (ugh) Michael McDonald, plus Heart, Earth, Wind and Fire, KC & the Sunshine Band and many more. Now available: The complete collection, 16 blissful hours of perfect rock/R&B on 11 DVDs, fully restored and very much appreciated.

This was an historic time for the venerable Cartwright clan – whose story continued for another 8 years before ending in 1973 – because it was the first season without brother Adam Cartwright (Pernell Roberts, who dropped out to pursue other opportunities). Our favorite episode is probably “Destiny’s Child”, a rare story for the day about mental illness, years ahead of its time. Fans will also remember that Season 7 was famously “lost” by the studio when the series first appeared in reruns during the 70s, not seen again until the late 80’s when it was miraculously found – sitting on a NJ storage shelf, right where it was supposed to be all along! American cultural history at its finest.

The premier of Peter Capaldi (“World War Z”) as The 12th Doctor – older, darker and far more brooding than previous Doctor Matt Smith – joined by Matt’s lovely companion Clara (Jenna Coleman). Frankly, we thought him to be a royal asshole throughout this episode: Confused, insane, mean-spirited and completely unsympathetic, it wasn’t until the end of the second episode that we saw where the show-runners were headed, at which time he becomes more accessible. This episode is set in Victorian London, providing an excuse to drop in a T.Rex (which suffers a fiery exit), and revisit the always-welcome Paternoster Gang: Reptilian Madam Vastra, her husband Jenny, and their Sontaran butler, Strax. How can you say no to The Doctor?

FOR NO GOOD REASON

All fans of Hunter S. Thompson know that his artist of choice for illustrating his books was Ralph Steadman, whose angry lines perfectly captured Thompson’s fractured world view. Johnny Depp leads this doc on the artist, with comments and tributes from such luminaries as Monty Python’s Terry Gilliam and Richard E. Grant (“Corpse Bride”), as well as Steadman himself. A long-overdue look at a true visionary.

Set in the same universe as “Captain America: Winter Soldier,” this TV series follows the adventures of Agent Coulson (Clark Gregg), arguably Marvel’s best-loved human character, and the massive agency of SHIELD, dedicated to protecting us from aliens and their deadly, world-altering tech. The series didn’t really find its legs until “Winter Soldier” hit the theaters, rebooting their world, leaving them betrayed by their most trusted members, fugitives without a country, hunted by their former allies, not sure exactly who is behind it all. A very welcome weekly dose of Marvel starring Ming-Na Wen, Brett Dalton, Chloe Bennet, Iain De Caestecker and Elizabeth Henstridge.

This wildly popular, squeaky-clean flick plays like an extended sitcom episode starring Sean “Samwise” Astin (who has made some odd career choices lately), Sarah “Grey’s Anatomy” Drew, Patricia “Everybody Loves Raymond” Heaton, Trace Adkins and Andrea Logan White holding a pee-stick. The women just want a night out alone where they can pretend they aren’t married-with-children, and they want the men to step up and take care of their unruly brood, including Abbie “Suburgatory” Cobb and little Shiloh “The Conjuring” Nelson. You think it’s gonna go well?

Factually, this History Channel look at the political drama behind WWI and WW2 – and all the complex power plays and ruthless double-dealings therein – isn’t as accurate as we’ve come to expect from these folks; but, as straight-up political drama, it is a great effort. All the key players are present: Roosevelt, Hitler, Patton, Mussolini, Churchill, Tojo, DeGaulle, etc, and all the actors involved give engaging performances. Just keep in mind that this is meant to inspire the viewer with the power and joy of history, not give them a college degree.

In this followup to the popular Beast Wars plotline, Optimus Primal (no, that’s not misspelt!) and his band of Maximals return to Cybertron, only to find it abandoned, save for vicious, prowling Vehicon drones. Infected with a mutating virus the heroes find themselves changing into something that’s neither beast nor machine. The darkest Transformers outing ever made; with intimations of racism, Nazi “final solutions”, environmental stewardship and the inevitability of extinction.

The very definition of “gritty”; a knockout dark tale of violence, family, and the healing power of innocence. Set in modern London and featuring some of Britain’s hottest young actors, it follows Tyson (Ashley Chin), a young burglar and surrogate parent to his teen sister, Letitia Wright, guiding her through their rough landscape. Then they meet wide-eyed visitor Tia (virginal yet provocative Ashley Madekwe from TV’s “Salem”), whose seeming naivete upsets the delicate balance of everyone’s lives. One terrific inner-city drama with the great David “Blood Diamond” Harewood as the teacher who inspires the sister to greater heights.