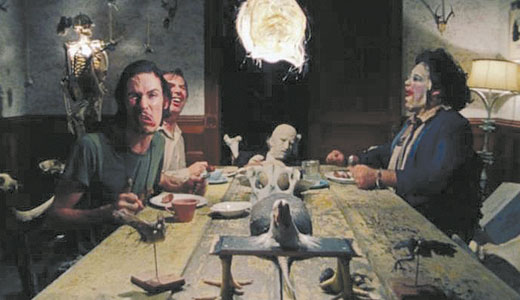 You have to give this 1,278th reboot of Toho’s signature franchise credit: They did it right! Despite all the massive set pieces, a new Big G – 10 times the size of any previous monster – and all the groundbreaking (snigger) digital work, it is in every way a classic Godzilla film. From its street-level carnage, to the screwy science, to the cities left in ruin, to the honking roar, it captures the essence of the best Gs perfectly. Led by old-school vets Bryan Cranston and Ken Watanabe, with young stars Aaron Taylor-Johnson and Elizabeth Olsen (who is truly moving), this is now our all-time favorite kaiju. Buy it.

There are very few films that disturb us as badly as “Saw” (as its many fans affectionately call it) but that doesn’t stop us from spinning it once a year for a cannibal video party! And if you think you know all about this truly shocking slice of history, here are two things you might have missed: (1) For its 40th anniversary, Dark Sky Films has released a savage Blu-Ray/DVD combo set., filled to ripping with bonus goodies. And (2), the actor who played “Grampa,” John Dugan, lives rat-cheer in Louisville (last we heard). Originally from Brazil, Indiana, he now does horror film cameos when not suffering thru our endless Kentucky summers. We love you, John!

The last of the great nighttime soap-operas finally completes its long road to home video. Starring such legendary actors as John Forsythe, Linda Evans, Joan Collins, and Heather Locklear, this steamy ABC drama about the fortunes and misfortunes of a wealthy Denver oil family was in response to CBS’ similar “Dallas,” though far more adult and restrained. It also marked the first time that an openly Gay character (Jack Coleman’s “Steven Carrington”) ever appeared in a nighttime drama.

EVERGREEN: THE ROAD TO LEGALIZATION

The best doc ever made on the subject of marijuana legalization, filmed during Washington State’s groundbreaking push to be the first in the union to legalize pot. It all came down to State Bill I-502, with the citizens of Washington being lobbied relentlessly by all sides – and there were far more than two – all because of a 40-year-old political and social nightmare created by millionaire William Randolph Hearst to protect his newspaper-pulp-making investments. Extremely informative, very well researched and clearly presented.

“Mecha,” that much-maligned “giant fighting robot” anime genre was revitalized by the first season of “Majestic Prince.” This collection picks up with the addition of an unpredictable new recruit into Team Rabbits; his demeanor varies from shy to aggressive to likeable to obnoxious, making it difficult for the still-learning team to work together. But they all agree: the guy can fight! Terrific battle sequences and a focus on the importance of personal/social development make this a great series for kids, teens and adults.

The American drama “Homeland” is a watered-down imitation of his far more intimate and dangerous series from Israel. Released after 17 years of torture, the titular prisoners are celebrated as national heroes – except by a military psychiatrist assigned to supposedly help them restart their lives. He’s determined to find evidence of treason! A master at twisting their words against them, he may be the most evil character ever seen on the tube. To say more might spoil the surprise of this densely-layered, very adult drama.

An insanely cheap buddy-movie/horro-drama that succeeds without special effects, undue bloodshed (for a zombie movie), or nudity. A pair of former baseball players – one an introspective guy who misses civilization, the other satisfied to be free of society’s chains – go looking for food and women in undead New England. Gut-bustingly funny, if embarrassing, at times; scary, warm, human, vicious, likeable, exciting, deep and simple in turns, this is exactly how you make a great little movie for only 6-grand. Not perfect by any means, but deserving of your attention.

The original “The Dead” developed quite a fan base, following a pair of soldiers as they battled their way across zombie-infested sub-Saharan Africa. The filmmakers return for this parallel story set in the wretched slums of Mumbai with engineer Joseph Millson (“Casino Royale”) frantically racing to save his pregnant girlfriend before she gets eaten. The undead have never looked more disgusting than here, portrayed largely by starving, filthy, low-caste street beggars. There’s an undeniable racist component to this madness, but you can’t argue with the disgusting results.

Wow! What a story! The historically-accurate tale of an Argentine family who allowed a German doctor to move into their home and care for their young daughter in 1960. But disturbing events – and attention from unimaginable sources – lead them to suspect that he’s not who he claims to be. In truth, he was Josef Mengele (not a spoiler), the most wanted man in the world: the infamous Nazi Doctor of Death who tortured and murdered countless victims in German concentration camps. A thrilling, scary, real-world adventure of the first order. Don’t miss this.

Few Americans today can tell you what started WWI, but to Britons, that event marked the shattering of a Golden Age: over 200 years of peace, plenty and safety forever lost to the musty annals of history. This grand 3-part epic recreates that catastrophe with Ian McDiarmid (“Star Wars” Emperor/Darth Sidius), and a host of first-string actors from “Downton Abbey,” “Chariots of Fire,” “V for Vendetta,” “Maleficent,” and others, chronicling the assassination of Archduke Franz Ferdinand and the resulting all-too-human blunders that set England and Germany to war.

Ashley Rickards was both hilarious and suitably embarrassed as the cute 15-year old high-school nobody who suffered an accident, landing her in a neck brace and stick-out arm cast – leading everyone to believe that she had tried to commit suicide! But that was two seasons ago, and now she must face a new embarrassment: is she pregnant?! That’s when her clueless dad decides to have “the talk” with her. This series just keeps getting better and better.

What does it take to make a movie? Money, script, director, and crew come to mind. But who picks the cast? It used to be the producer – the money-man – but casting has become a bona fide profession unto itself, thanks in large part to Marion Dougherty. Who? This doc looks at the career and influence of the groundbreaking talent who created the profession of “casting director” and has made nearly all of your favorite movies, plays and TV shows what they are today. Truly inspired – and inspiring – with insights and history from De Niro, Scorsese, Eastwood, Redford, and many others. Damned entertaining.

Clearly inspired by Terence “Trinity” Hill’s Italian “Don Mateo” series, this lighthearted BBC entry about a mild-mannered priest/sleuth is a ball. Mark “Arthur Weasley” Williams plays the compassionate (and slightly goofy) 1950’s man of the cloth who clearly does not judge any member of his flock, regardless of what crimes they may have committed – even murder. But that doesn’t mean that he isn’t committed to justice, as the lucky residents of beautiful Kembleford know all too well. Based on the short stories of GK Chesterton, this thing is a hoot, and very addictive.

The original “Perry Mason,” that legendary TV series that always climaxed in a thrilling courtroom reveal each week from 1957 to 1966, was resurrected in the 80’s as a string of wildly popular made-for-TV movies. Both starred Raymond “Godzilla” Burr as the titular legal genius, and Barbara Hale (wife of Alan “The Skipper” Hale) as his secretary; William “The Greatest American Hero” Katt filled in for the late William “Rebel Without a Cause” Hopper as detective Paul Drake. New to video 2-fers include: “The Case of the Lady in the Lake” (1988)/”Lethal Lesson” (1989), “Scandalous Scoundrel” (1987)/”Avenging Ace” (1988), and “Musical Murder”/”All-Star Assassin” (1989 both).

There have been literally scores of Musketeer movies over the decades, but only the BBC would have the cohunes to create a TV series this sexy, over-the-top and smart. Soldier/Bodyguard Porthos (Howard Charles) assembles and leads a trio of brilliant rogues – D’Artagnan, Aramis and Athos (Luke Pasqualino, Santiago Cabrera and Tom Burke) – on a light, fast-paced and surprisingly intelligent mission to protect King and country, usually from the machinations of evil Cardinal Richelieu (Peter “The New Doctor Who” Capaldi!). Could use more sex, but what couldn’t?

The sequel to “Think Like A Man”, also based on Steve Harvey’s best-selling comic look at male-female relationships. This time, all the players – Kevin Hart, Gabrielle Union, Wendi McLendon-Covey, Adam Brody, Regina Hall, Dennis Haysbert, etc. – head for Vegas for a big-ole noisy wedding blowout filled with predictable results: a bit of PG-13 titillation, cops, strippers, etc. Not terribly original, but with a great cast who appear to be having fun.