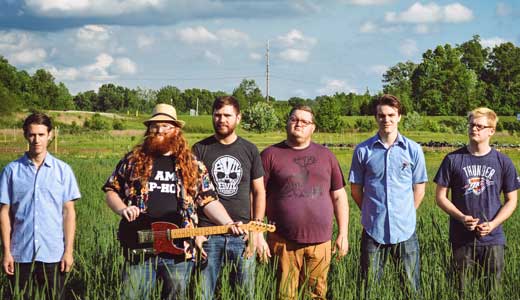 The World According to The Foxery

It’s difficult to summarize how The Foxery sounds. That an airy calm preempts the album, the soft hissing sheen of tape machines capturing the smallest sound fragments, is hardly indicative of what’s to come, which ranges from raging barn burners like “Broken Vessels” or “The Gnashing II” to the calming lows of “The Sorrow” or “Near.” The one common thread throughout every song is the pathos that the band imbues each song with; every moment is pregnant with the possibility of some kind of cathartic release. When I spoke to singer/guitarist Cadillac Young by phone one balmy afternoon, he struggled to define The Foxery’s sound, answering a question no musician is every really comfortable with. Finding the right words, he asserted, “Weird music for normal people.”

The “normal people” part was what impressed the most. The way he delivered this answer was simple and without pretense; at least from Young’s perspective, the band wants to push boundaries and explore possibilities, although not at the expense of their pop sensibility, of which they have plenty. This sense of humility was ever present throughout the entire conversation. Of their origin, Young explained that “Our other lead singer, Calvin, started everything on his own, and he and Travis started as like a folky thing, and I joined on, and oddly enough, our drummer, once he joined, he became the main songwriter. So he writes a lot of the lyrics, and shows me guitar parts, and we’ll build songs around that. So it went from being this weird singer/songwriter thing to being like The Eagles.”
That bit about the drummer is interesting, and not nearly as dismissive as it may seem. It’s not that their drummer is incapable of writing, but more that the band as a whole wanted to force their own evolution, to intentionally move outside of their comfort zone and push their writing. In comparison to their previous efforts, Young noted, “I think, let’s see … the previous work was I guess more comfortable. It was written by the person you would normally expect to write the record. But with this next record, we wanted to put ourselves in a weird space, and we gave it to the drummer, who isn’t normally a guitar player. It can be uncomfortable at times, but that was what we were going for.
He means uncomfortable in a literal sense. Recorded in Young’s home studio, The Church of Wax, the band went to some extreme lengths to push their performances. Where Phil Spector might pull a gun on his clients to encourage a certain outcome, Cadillac Young and the rest of The Foxery took a much more humane, if no less interesting, approach. Young explains, “One thing we did in the studio was really weird, but fun or uncomfortable. Prior to whoever was going to record, they had to drink a gallon of water, and then record all their parts in one go through. Whenever they couldn’t take it anymore and said, ‘I’ve got to piss,’ whatever takes they’d done were those they’d kept.”
So how did that happen? Young testified that “I always drink a ton of water, and I am always pissing. Someone was joking on me, and I said ‘well you try and drink a ton of water.’ It made us nail it better on the first couple of time because our time was limited. It’s also a way to let yourself be comfortable with the way things are. As long as you were willing to hold and be uncomfortable, but the second you couldn’t hold it anymore you had to be OK with whatever the results were.”
As to the album’s repeating motifs, both sonically and lyrically, Young again avoided any bravado. He sees that “in the grand scheme of things, everything is connected, so we didn’t try to pretend that it wasn’t. We ripped ourselves off in a few songs; we wrote a riff and slowed it down in a few songs, and stuff like that.”
The album title is a simple reference. Young explains, “It’s a Dr. Seuss reference. We all like Dr. Seuss. We all decided that it was vague enough that it didn’t really say anything. We didn’t want the title of the record to say anything. We didn’t want people to hear and know what we were going to sound.”
What The Foxery seem to do best is exude this kind of modesty both as musicians, and in the case of Cadillac Young, as people. For him, despite the often heavily emotional content of the lyrics and music, “There is nothing we really want anyone to take away from it. We want people to like it of course, but we want them to take away from it what they take away from it. What we took away from it is, I feel like when people hear these songs they’re going to think the guys with the guitars wrote the songs.”
Mentioning the interplay between studio and performance, Young finds a satisfying performance meets simple criteria. For him it’s “everybody wanting to be there. And I don’t care if there’s five people or five hundred. It’s just not fun to play shows when people don’t seem to care. The fun live shows are for people who seem to genuinely care.” For his favorite, he recalled, “We played at this place in Buffalo, N.Y., and a lot of people were there and a lot of people there and lot of a people were singing along, and the whole town smells like Cheerios. Oh, and everybody was short. Make sure you put that in there. It was an enjoyable show.”
But at the end of the day, Young and friends just want to make the kind of music that they enjoyn and that they hope you like too. For Young, “If it’s lap steel guitar, it’s a good record. We don’t [have a lap steel]. We have some slide, but I wish we did. We didn’t write a good record.”
You can find out if that’s true this Tuesday, Sept. 9, when The Foxery’s record Unless is released on Spartan Records.