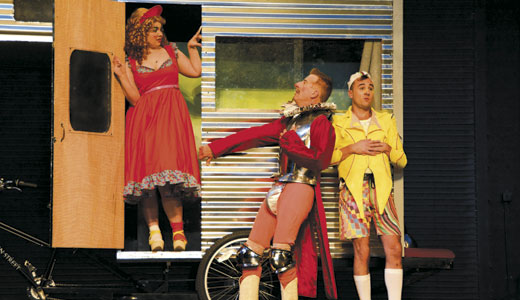 Four and a half centuries after he was born, Shakespeare still captivates directors, actors, readers and audiences. We love his plays, whether staged traditionally or in radical updates – like the 1995 film of “Richard III” where the king’s horse becomes a Jeep or the excellent 2012 Actors Theatre of Louisville production of “Romeo and Juliet” that plays out in an opulent Southern California home.

Such is the plasticity of these scripts that they can pretty much survive ridiculous treatments (like the teen comedy “She’s the Man”), or they can morph into something sublime and fresh (Leonard Bernstein’s masterpiece, “West Side Story”).
Sublime doesn’t seem the right way to describe the reimagined “Love’s Labour’s Lost” now running at ATL’s Pamela Brown Auditorium as a Bingham Signature Shakespeare production. The production is too meaty and rambunctious for that (notwithstanding some evocative balletic choreography featuring Lucas Melsha and Emily King). But seldom has anyone tampered so lovingly or audaciously with a Shakespearean text  – and the result is deliciously witty entertainment.
At times, the adapters (Steve Epp, Nathan Keepers and Director Dominique Serrand, all associated with The Moving Company, a Minneapolis troupe) exhibit the sort of authorial virtuosity Tom Stoppard brought to “Rosencrantz and Guildenstern are Dead.”
They retain the bones (and much of the language) of the original script. The tale begins with the King (Richard Prioleau) persuading his attendant Lords (Jim Lichtscheidl, Brandon Garegnani and Lucas Melsha) that in the wake of a brutal war they should join him in three years of solitary study – during which time they’ll eschew the company of women (along with a host of other requirements).
The pledge is both unpopular and impractical – since the King is about to receive a delegation of women led by the Princess of France (Kimiye Corwin) and her Ladies (Maggie Chestovich, Ashley Rose Montondo and Emily King).
There are four warriors sworn to celibacy.  And there are four women – as martial and bold as they are fetching. There is the inevitable pairing off at first sight. And there are tangled miscommunications, mixed messages and plenty of romantic confusions, setbacks and reconciliations.
In addition, there is the Spanish Lord Don Adriano de Armado (Steve Epp), whose colorful, clangorous costume is itself a character (all of Sonya Berlowitz’s costumes are delightful, as are the other technical features, lighting by Marcus Dillard and sound by Zachary Humes). Armado’s comic minion, Moth, is played by Nathan Keepers, and their bawdy companion Jaquenetta is played with raucous abandon by Heidi Bakke. Indeed, this trio is all about raucous abandon. They infuse scene after scene with grand comic gestures and verbal interplay delivered with an operatic virtuosity that climaxes in an especially droll “death” scene.
People who know the play will note that some characters, including the pedant Holofernes, are missing.  But it hardly matters. We get plenty of satirical pedantry from the cerebral musings of Lichtscheidl’s Berowne – and his complicated affair with Maggie Chestovich’s fiery Rosaline adds a note of emotional depth.
Beyond that, though, the play caters to the pedant in all of us with dozens of deftly embedded allusions to and quotes from other Shakespearean works.
“Love’s Labour’s Lost” runs through Sept. 24. For information, connect to          actorstheatre.org, call 584-1265, or visit the box office at 316 Main Street.
Love’s Labour’s Lost
Through Sept. 24
Actors Theatre
316 Main St. • 584-1265
www.actorstheatre.org