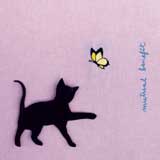 Touring in support of the rerelease of the eminently listenable “The Cowboy’s Prayer” EP, Boston indie outfit Mutual Benefit are playing in Louisville October 28 at Zanzabar. Described as orchestral folk, the EP is an ephemeral glimpse into an otherworldly realm. Far from what you’d expect, “The Cowboy’s Prayer” represents life on a frontier that is far removed from the Old West, playing like the soundtrack to Kubrickian sci-fi. Despite the presence of synths and the large absence of traditional percussion, there is still an undeniable pop quality to the EP, especially as delicately voiced by singer-songwriter Jordan Lee. Taken in counterpoint to last year’s “Love’s Crushing Diamond,” “The Cowboy’s Prayer” provides useful insight into the evolution of the band over the years, from haunted indie that often seems to lack form to sublimely melodic folk act reminiscent of the best Elliot Smith. —Syd Bishop