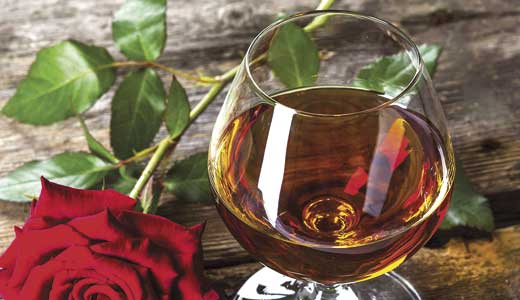 Fifty years ago, in 1964, President Lyndon B. Johnson passed a resolution that declared bourbon “the native American Spirit.” Today in 2014 as we start Bourbon Heritage Month, the state of the bourbon union is as strong as it has ever been.

Bourbon production has grown by more than 150 percent in the past fifteen years. In 2013 alone, Kentucky distilleries filled 1.2 million barrels of bourbon – the busiest year of production since 1970. According to the Kentucky Distillers’ Association, barrel inventory topped 5 million barrels for the first time since 1977. And since there are only 4.38 million people in the Commonwealth that means we should have plenty of bourbon to drink for years and years to come.

Bourbon is hip from coast to coast. From Manhattans in Brooklyn to Gold Rushes in San Francisco, you would be hard pressed to find a city worth its salt that is not home to one or more great bourbon bars. Five years ago this simply wasn’t the case. Bourbon was by and large a beverage drank right here in the South and Midwest. As bourbon’s cool Americana and traditional image has risen, domestic sales have skyrocketed. According to CBS Moneyewatch, bourbon and Tennessee whiskey sales reached $3.4 billion, a 10.2 percent increase. Volume was up some 7 percent, totalling more than 18 million cases. Bourbon production has increased more than 120 percent since 1999 from just under half a million barrels produced a year to more than one million produced this year. The 2012 tax-assessed value of all bourbon barrels aging in Kentucky was $1.7 billion up $350 million from 2011.

According to Distilled Spirits Council of the United States (DISCUS), flavored whiskeys, which accounted for 45 percent of whiskey growth volume, and traditional whiskeys (including the more expensive premiums) were responsible for 80 percent of revenue growth. Another factor was the rise of craft distillers and craft brands, from 82 in 2010 to more than 400 in 2013. All told there were 129 new straight whiskeys, including 53 bourbons, introduced last year.

The infrastructure for producing bourbon is growing just as rapidly. Bourbon manufacturers have invested more than $230 million in the past year alone in capital upgrades, including new stills and rickhouses to store this ever expanding hoard of resting barrels. Diageo just broke ground in Shelby County on a brand new distillery to produce Bulleit bourbon. This facility alone will cost an estimated $115 million and will produce 1.8 million proof gallons (750,000 9-liter cases). And they aren’t the only ones. Michter’s just opened a new 65,000-square-foot production and bottling facility in Shively and Angel’s Envy recently took deed to a property on East Main St., where they will build their new distillery and visitor center.

In addition, people outside of America are finally catching on to the fact that the brown liquid made and aged here in the fine state of Kentucky is mighty fine indeed. American distilled spirits exports grew 16.5% last year, reaching a record $1.34 billion, making spirits the largest category of exported booze. Topping wine’s $1.14 billion and crushing beer’s $334 million, according to data from DISCUS. Whiskey, including bourbon, accounts for 69 percent of all spirit exports. For the first time ever, the industry counted more than a billion dollars in export sales. The top growth markets were Nigeria, Panama, Greece, Georgia, China and Belgium, which each account for less than $20 million in sales but have seen tremendous recent increases. Germany and Japan remain bourbon’s top two export markets.

This booming market is riding high on the back of premium small batch expressions of the beverage. No longer is the market shaped by brands such as Old Grand Dad and Old Fitzgerald. Today it seems there is a new varietal of small batch or single barrel premium bourbon hitting the market every week. From Angel’s Envy port finished bourbon made by the Louisville Distilling Co. to the E. H. Taylor collection of small batch bourbons produced by the Buffalo Trace Distillery, packaging is getting prettier, prices are rising and quality is improving.

Bartenders are also reviving the pre-prohibition style of Bottle-In-Bond bourbon. BIB was a category of bourbon introduced by legislation in 1897. The Bottle-In-Bond act was the first-ever consumer protection and food labelling law passed in the United States, some nine years before the passage of the Pure Food and Drug Act, which regulated meat packing plants and medicines such as cocaine and laudanum (liquid opium). The act mandated that all bottles labeled BIB must contain bourbon that was a minimum of four years in age, 100 proof (50% water and 50% alcohol by volume) all come from the same distillery and all from the same distillate batch. Today bartenders love mixing these high proof bourbons into cocktails. There are only a handful left on the market, but they set a benchmark for quality and taste that can’t be underestimated. Also they aren’t nearly as expensive as their super premium small batch and single barrel cousins. Often costing just $20 or less a liter, they make for an affordable pour at the bar (usually $5 or less) and a great everyday bourbon for your home shelf.

The Downside of Rapid Growth

Yet there is a dark side to all of this growth. Unlike vodka, bourbon can’t be made in a day, it has to rest patiently for some 6, 8, 10, 12 or more years. With so much growth, supplies of the highest quality aged spirit are dwindling. The ‘bourbon shortage’ is upon us and while there is plenty of the good stuff still on liquor store shelves, producers have had to come up with some crafty ways to deal with their shrinking inventories. Great value brands such as Old Charter 10 year, Ancient Ancient Age, and Old Fitzgerald 1849 small batch have been discontinued and disappeared completely from store shelves. Other brands like Basil Hayden 8 year, Very Old Barton 6 year and Ridgemont Reserve 1792 8 year have all recently lost their age statements, meaning they can now contain younger whiskey. Distillers must estimate demand years and even decades in advance, and back in 1999 nobody saw this explosive growth coming.

Meanwhile, the collectors market for rare and limited released bourbons has also exploded. It was only three years ago that you could still find bottles of Pappy Van Winkle bourbon and Jefferson’s Presidential Reserve 18 year on store shelves. Today, you have a snowball’s chance in August in Kentucky of finding these super premium bourbons for sale at your neighborhood liquor store. Running parallel to this has been the rise of a bourbon black market. First on Ebay and now located in the nooks and crannies of Facebook and Craigslist, illicit secondary market sales of collectible bourbons have skyrocketed. A bottle of Pappy 23 that used to sell for $250 at a liquor store can now fetch up to $1000 on the black market. There is even a bourbon blue book charting the prices of these rare and collectable bourbons (imatravelninja.com/bourbon-blue-book).

All said it may just be that we are living through the greatest of golden age for the production and drinking of the delicious amber colored corn nectar. Consumers have never had more options for imbibing and distillers have never before seen such an amazing tour around in what was less than twenty years ago a niche player in the global spirits industry.

The only thing standing in our way of global whiskey dominance is ourselves. Can the industry sustain domestic and international growth while supplying the market with quality bourbon? Ultimately I believe so. The demand for all things authentic has never been stronger. From “buy local” campaigns to a resurgence in all things Americana (be they  Harley-Davidson motorcycles or a new trilogy of Star Wars movies) the desire for real “made in America” products has never been greater. The cultural cachet attached to bourbon is as traditional and authentic as apple pie, Marvel Comics and the Grateful Dead.

Bourbon is the queen of American spirits and it represents a revival of a kind of Americanism that Americans in general and the entire world wish to participate in. So let’s raise a glass and toast the enduring and strong state of the bourbon union. Long may she reign.