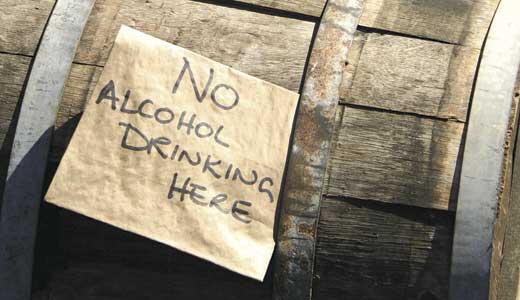 Every Dec. 5 for many years, Mike Veach and colleagues at the Filson Historical Society would gather at the old D Marie’s bar at the top of the Galt House to celebrate Repeal Day—the day in 1933 when the 21st Amendment to the Constitution was ratified, repealing the 18th Amendment, and thus ending Prohibition.

“People would laugh at me when I said it, but I really think that Repeal Day should be celebrated as a national holiday,” says Veach, a bourbon historian who travels the country teaching the brand-neutral Filson Bourbon Academy, an intensive, eight-hour education in all things bourbon.

While it might sound like a contrived excuse to go out and drink bourbon, Veach’s intentions are pure—in a Constitutional sense.

Veach, author of “Kentucky Bourbon Whiskey: An American Heritage,” is an expert on bourbon’s role in both Kentucky’s heritage and the history of the United States.

“Our first Constitutional crisis was the Whiskey Rebellion,” he starts. “And the first government cover-up is the Whiskey Rebellion. Whiskey paid off the Revolutionary war debts because of the tax. It also paid for the War of 1812. There was no tax between 1817 and 1861, but it was brought back to pay off the Civil War debt, and has been with us ever since.

Also, trademarks and registrations were part of the bourbon industry’s business practices long before the government got involved with trademark legislation, Veach says. “The term ‘brand name’ came from branding your name on the barrelhead.”

The industry is also an excellent historical measure of the impact of the Industrial Revolution, Veach says. It started in the early 19th century as a small cottage industry with independent farmers and then grew into huge distilleries by the end of the century.

After Prohibition, the bourbon industry was vital to winning the Second World War through the production of synthetic rubber, Veach continues. “A lot of people don’t realize that Rubbertown is there because of the distilleries. The military needed high-proof alcohol to make synthetic rubber during the war because the Japanese controlled all the sources of natural rubber.”

Veach concludes by bringing bourbon’s relevance up to the 21st century. Not only is there an unprecedented boom in bourbon’s popularity, the industry is a big revenue source for the government.

“Seventy percent of your price for a bottle of bourbon is taxes,” he says. “So it still contributes immensely to the coffers of the United States, Kentucky and local.”