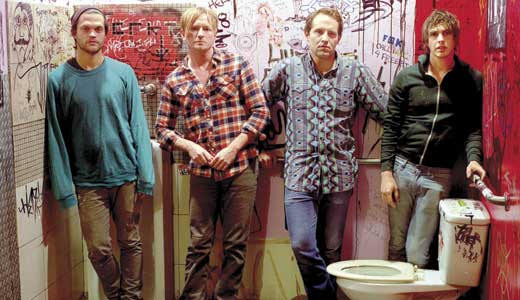 If you would like to partake in the celebration of National Bourbon Heritage Month, how about doing it with over 130 bourbons and some free apps?

Bourbon’s Bistro is honoring Bourbon Heritage Month by offering Bourbon Bites every Wednesday in September, from 4:30 to 7 p.m. Executive Chef Jeff Bridges will provide complimentary complements to the extensive bourbon offerings. As with the regular menu, all food is locally sourced and bourbon inspired. The Bourbon Bites are free tapas-style samplings at the chef’s whim — whatever is fresh, fun and adds to the bourbon sippin’. Still not convinced? Our local gem of a bourbon bar was awarded the Gold Medal from Whiskey Magazine’s “Whiskey Bars of the World.”  —Aaron Yarmuth

The Waterfront Botanical Gardens is still in the planning stages but that doesn’t mean we can’t learn (and dream) about it. To start things off, Botanica is hosting a free community information event on the Waterfront Botanical Gardens at the Clifton Center, 2117 Payne St., from 6-8 p.m. Thursday. Free but reservations are required.  On Friday, Sept. 5, work by 38 local artists will be on view at the fundraiser/preview party from 6-8 p.m. at the Woman’s Club ($75 per person). The main event featuring art, horticultural demonstrations and speakers is on Saturday, Sept. 6 from 10 a.m.-5 p.m. Zan Stewart of Perkins & Will, the Atlanta firm designing the Waterfront Botanical Gardens, is a featured speaker, as is Barbara Pierson of White Flower Farm in Litchfiled. Conn. Tickets are $10. —Jo Anne Triplett

To open their 100th anniversary season, CenterStage is producing their most requested show—“Chicago.” With a 1975 Broadway premiere and a 1996 revival—which won six Tony Awards, two Olivier Awards and a Grammy—“Chicago” is a story of greed, murder and scandal set in the Roaring Twenties. Artistic Director John R. Leffert says the CenterStage production is a mix of both the original and the revival and “deals with subjects that are still prevalent in society like reality stars, paparazzi and fame.” Local star and former Miss Kentucky, Whitey Trowbridge, makes a CenterStage debut as the vaudevillian murderess Velma Kelley, singing “And All That Jazz.” Rivaling Velma for most-infamous-celebrity status is Roxie Hart, played by Kate E. Reedy. The corrupt lawyer Billy Flynn is played by Pete Lay.  —L. Snyder

How to Dress Well/Twin Limb

The band’s name, How to Dress Well, fits accordingly, although it’s less about any sort of fashion sense and more about the quiet sensuality of the music found therein. This is music made to impress, perfect for a quiet evening out, and probably best served post-dinner on a candlelit evening. That said, there is a kind of mystique here previously reserved for The Weeknd, which is to say that both make music that leans heavily into R&B tropes, but which also features a kind of foreboding that threads throughout everything, darkly sexual and elegantly put together. Playing Friday at Zanzabar, How to Dress Well is joined by the delightful Twin Limb, who offer sublimely elegant, sort of Low-inspired tunes, albeit with a lot more accordion. —Syd Bishop

Oh sweet mercy… never thought there would one day be an opportunity to attend a party with cheerleaders, marching bands, Tailgate Olympics, a live DJ and horse racing — all in one place. Open up the September Meet at Churchill Downs, and latest installment of Downs After Dark with College Rivalry Night. Of course there will be a full lineup of races — including two major stakes races — but if wagering isn’t your thing, there’s still plenty of party for you. Roaming entertainment for all ages includes cheerleaders, dance squads and marching bands from local colleges. As well as several contests and games.  Most importantly Churchill Downs is donating $1 to the V Foundation for each ticket sold. So head out for the festivities, and help find a cure for cancer. Tickets can be purchased at Will Call. —Aaron Yarmuth

Last year’s inaugural Open Studio Weekend featuring Louisville Metro and Southern Indiana artists was a smashing success. I’m happy to say the event that benefits the Louisville Visual Art Association and U of L’s Hite Art Institute is back again this year. An exhibition featuring work by tour artists will be at U of L’s Cressman Center, 100 E. Main St., from Sept. 5-14. The show opening and launch party is on Friday, Sept. 5 from 6-8 p.m. (free and open to the public). The actual Open Studio Weekend featuring 85 studios is on Saturday, Sept. 13 from 11 a.m.-5 p.m. and Sunday, Sept. 14 from 12-4 p.m. Open Studio admission wristbands can be purchased at the Cressman Center, LVAA and other locations (details on LVAA website). —Jo Anne Triplett

‘Thinking Power: An Artistic Masterpiece at U of L’

Past readers know I have a thing for “The Thinker.” For years, U of L’s iconic sculpture by Auguste Rodin sat in a state of Kermit frog green, just begging for restoration. It finally was returned to its bronze glory in 2012. One of the many people behind this happening was Fine Arts professor Christopher Fulton. Fulton will speak about “The Thinker” in a new lecture series the university is sponsoring on Saturday home football game days. Many Louisvillians know there is a “Thinker” in town but think it’s a copy. Fulton will discuss its origin, how it got to Louisville and, most importantly, what it means. The presentation at 10 a.m. is preceded by a light breakfast with coffee. —Jo Anne Triplett

Mellwood Art & Entertainment Center is a treasure trove of local art any day of the week. Shops like Formé Millinery and Baz & Bea (hand-dyed clothing) make shopping a gallery hop experience. Baz & Bea’s Justin Keibler and Formé Millinery’s Jenny Pfanenstiel are just a couple of 200 resident artists who will be at the 6th annual Mellwood Art Fair. There’s sure to be a diverse array of jewelry, pottery, clothing, sculpture and curiosities like the upcycled hand-crafted lens pieces by etsy shop Raise My Glass. Of the 165 juried artisans, Memerie McGary is getting a lot of buzz., having only recently started working as an artist after suffering a traumatic brain injury. Occupying both indoor and outdoor spaces, the fair offers some air conditioned spaces, plentiful free parking, food and drink, and live entertainment. —L. Snyder

Topeka, Kansas natives Origin have risen to the top of the technical death metal pile, their influence on the present scene felt far and wide. Now they’ve come to celebrate and tour for the release of their latest mind-boggling album, Omnipresent. Meanwhile Canadian newcomers Beyond Creation lend some hefty well deserved support. An impressive feat for a group who’s gone from unsigned unknowns to signed superstars in the span of just two years. Australian grind terrorists King Parrot and South Carolina based melodic death metallers Your Chance To Die round out the touring acts. With additional local support by the demented gentleman in littledidweknow, brutal hellraisers End It With A Shotgun, and Dysphorium. Deny yourself a lazy Sunday on the couch, this will be far grander entertainment, I promise.

D.R.I. subscribe a very particular subset of the genre that favors chug-heavy guitar riffs, mid-to-fast tempo drumming. Where some punk bands work through more political subject material, D.R.I. seem skewed more towards the social aspects of daily life. Of course, there is plenty of hardcore history in Louisville, which will also be on full display. Both The Decline Effect — featuring ex-members of Kinghorse/Malignant Growth — and Black God — featuring ex/current-members of Endpoint/Coliseum. Opening the show is Another Mistake, whose punk furious anthems serve as a direct descendant to what D.R.I. helped start all those years ago. —Syd Bishop

Sometimes you just want some righteous riffs and catchy hooks, and Broncho is rolling into town this Tuesday to give you just that. Touring in support of their new release Just Enough Hip To Be Woman, which sees release on Sept. 16, Broncho makes music questionably referred to as “pop punk,” or at least that’s what iTunes would have you believe. While there is certainly a punk sneer present, it’s often masked by a Cars-like pop sensibility that privileges radio friendly tunes almost as much as rock bombast. There is certainly a sort of jangly 80’s, alt-radio vibe here, like R.E.M. meets Tom Petty that works on an almost visceral level. The cuts are guitar heavy, but have a good beat, perfect for blowing off a little steam. Broncho demands that you nod your head, and that you either listen to them on a sunny day or imagine that you are. —Syd Bishop

Looking for Lilith Theatre Company offers the public a rare opportunity to participate in their award-winning “Choices: An Interactive Play on Cyberbullying and Teen Suicide.” Generally a touring show performed at venues serving young adults—schools, youth groups, health care organizations— “Choices” begins with a 20-minute play that sets up a scenario far too many young people will encounter: 15-year-old Hannah finds herself the victim of online attacks so vicious she contemplates taking her own life. At this moment of crisis, the fourth wall comes down and members of the audience are invited in to assume the role of Hannah, her mother, teacher or friend. Audience participation resolves not only the fictional conflict set in motion by the evening’s production, but may help resolve a future real-life conflict.  —L. Snyder