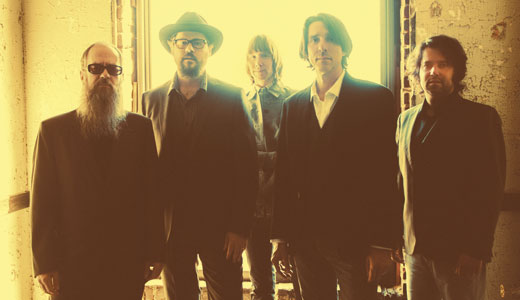 The last time the Drive-By Truckers went into the studio to record new music – a session that yielded two albums, 2010’s “The Big To-Do” and 2011’s “Go-Go Boots” – singer/guitarist Mike Cooley was something of a bystander when it came to the songwriting.

He may have been listed alongside the other band members as contributing to the music, but in reality, his songwriting counterpart in the Truckers, singer/guitarist Patterson Hood, brought in the vast majority of the songs.

For someone like Cooley, who has usually shared the songwriting load pretty equally with Patterson, this was distressing. “I’ve always kind of gone in cycles,” Cooley said of his songwriting output during a recent phone interview. “But this one was especially long and disturbing. I felt more pressure. “A Blessing and a Curse” (the group’s 2006 album) back then, that was a really dark period for me, too. I didn’t have as much coming in with that. And of course, by the next album, I had kind of a spurt. But it’s always gone like that. And it can be scary. But what generally starts happening is it gets closer to time to start recording and you start putting this pressure on yourself and you start stressing out about it. Then you’re definitely not going to write anything, or at least nothing that’s worth a shit. So I pretty much had to get through that, get those albums out, and we took this time off to get my head back in that space and let it happen. And it did. It’s a great feeling.”

Indeed, the Drive-By Truckers did take a chunk of time off in 2012 and 2013, after completing the touring cycles behind the one-two punch of “The Big To-Do” and “Go-Go Boots.”

And one thing that helped Cooley rediscover his songwriting groove was a project he took on during the band’s down time – a string of solo acoustic shows. He had never tried playing solo shows, and rather than trying to create new material for that undertaking, he drew from his back catalog of Drive-By Truckers songs. Nevertheless, this project had a good effect on his creativity.

“Even though I wasn’t doing new material — I was basically out doing stuff from Drive-By Truckers records — but I re-thought it all,” Cooley said. “I spent a lot of time. I worked real hard trying to come up with ways to make them (the songs) interesting in that setting, in that solo acoustic thing. And I think working on something is hardly ever a bad thing. Even if the results of it aren’t immediately obvious, there’s something positive about having some sort of goal-oriented focus. And it got me back into the, I don’t know, I think it did, it gave me some confidence, for one thing. It’s a good kind of confidence because it’s not a cocky confidence. It’s just more of having your feet more firmly planted.

“My goal really was to get comfortable with doing that kind of a show, because I never had been. I’d never done it much. I didn’t know if I was comfortable with it or not,” he said. “I had enough to learn. But I did, and that was scary and now that we’re into shows with the band,

I would say I’m more in control of my own thing. So I think that level of confidence, that productive kind of confidence helped me believe I could do it (write songs) again.

Whatever happened, something clearly got the songwriting juices flowing again for Cooley. He wrote six of the 13 songs on the excellent new Drive-By Truckers’ album, “English Oceans.”

Among his standouts are the album opener “Shit Shots Count” (a rocker with a cool, poppy guitar hook), “Hanging On” (a romp with a bit of an old-time barrelhouse blues accent) and “Hearing Jimmy Loud” (a crunchy rocker that’s a highlight of “English Oceans”). Hood, meanwhile, pitches in “When He’s Gone” (a seething, twangy rocker that rides the tension of conflicting emotions), “Pauline Hawkins” (a catchy, musically upbeat rocker) and the cinematic ballad “Grand Canyon” (a song about longtime friend Craig Lleske, who died of a heart attack in January 2013).

“English Oceans” is the 10th studio album from the Drive-By Truckers, which formed in 1996 in Athens, Georgia. The album features the studio debut of a somewhat revamped lineup of the group, with Hood, Cooley and longtime drummer Brad Morgan joined by bassist Mike Patton (replacing Shonna Tucker) and keyboardist/guitarist Jay Gonzalez (who joined in 2008).

Cooley said the revamped lineup gelled quickly and the new songs translate well to the live stage. “The thing about this one is all of the songs work really well live,” Cooley said. “I don’t think any of them create any lull in the live shows that you sometimes deal with new material.”