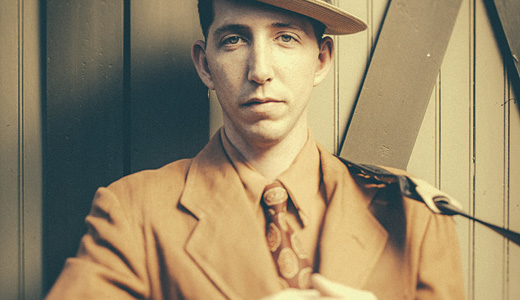 I caught up with Pokey LaFarge while he was wrapping up his Central Time Tour, playing dates in Chicago, Stoughton, Wis., Minneapolis, Minn., Iowa City, Iowa, and Columbia, Mo., all in just the past week. This Thursday, Sept. 25, the day after his final tour date, he will be back at Headliners along with The Tillers and The Loot Rock Gang, who will be performing their first show in Louisville. This diverse group promises to put on a unique selection of modern Americana music with elements of blues, western swing and ragtime.

LEO: How’s it going, Pokey? You must be about worn out from playing all those dates?

Pokey LaFarge: Yeah, pretty tuckered out, but you know, we get it juiced up at showtime and get the job done, man. You ought to see the show. It’s sort of the same in Louisville — not the whole Central Time show, but about half of it.

LEO: I was curious about that. You’re finishing up the Central Time Tour the night before you play Louisville; is that because we are on Eastern time?

PL: No, that’s not necessarily the case. The Louisville show was originally scheduled for September 17, but it got moved toward the end of the tour and two of the acts simply weren’t available for the new date. Louisville has always been one of our best stops, so it’s something we make a mission to do every year. The Headliners owners are good buddies, so it’s almost like a family reunion.

LEO: So, what’s next after you wrap up this Central Time Tour? Your touring schedule shows you will be taking a break for a bit.

PL: Time off from touring, but we will be doing a great deal of recording. So, it’s time off from traveling, but we’re gonna be in the studio quite a bit with a big recording project.

LEO: Is your new material along the same lines stylistically as the Americana jazz-blues and swing you’re known for?

PL: Yeah, just doing my thing, man; just do what the songs tell you to do. There’s certainly a “foundation,” if you will, and even that sometimes is hard to pin down. There’s a permutation that happens when you work with new musicians, which I am doing on this record. I’m also working with a different producer, and with a different producer comes different ideas. You got to let them do their job as well, and hopefully, it all makes for a better product. I can guarantee that it will be the best thing I’ve ever recorded.

PL: I like to think that I’m just getting started.

LEO: What inspires you to write your songs? What’s the creative process?

PL: Well, I don’t know if anyone can really explain that. I think you are born with that. I know that most people love music, reading books or enjoy art of some kind, and people use that enjoyment as an outlet in some way. I’m lucky that I have this outlet, that I not only listen to music like everyone else has at their disposal — I have the knack for creating music as well, and it has to happen. It’s essential. You don’t really try. I mean, you work hard to make yourself better and be discerning of your own ideas and what you actually put out there, but in terms of performing and the things that I write, it just happens.

The best songs come on naturally and are written in five minutes. That’s not something you can really place; it just comes from within you. So enjoy life and try to live it to the fullest because then you get more inspiration for more songs. In terms of the music itself, I enjoy the tonality of acoustic music. I like some instruments more than others as means of expressing my songs. It also comes down to the people, my band, people you spend that much time with on the road. It’s more than just the instrument they play or how they play it — it’s the people themselves. The people they are makes them play an instrument a certain way. So that’s one of the ways I feel very strongly about communicating my music — a strong melody and hooks, strong imagery and wordplay in the lyrics, telling a story. There’s a whole lot to talk about in that realm, but we’re not writing a book, just doing an interview.