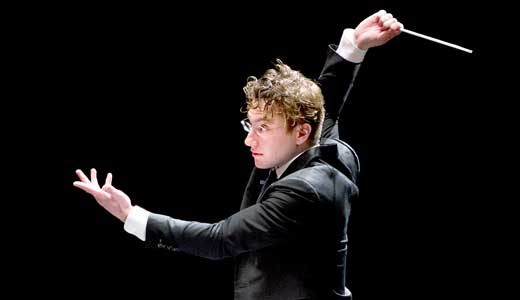 The most interesting aspect of the publicity splash the Louisville Orchestra has created to introduce Teddy Abrams as its new music director is the way Abrams, himself, is plunging into the opportunity. Putting himself out there as a visible young star of a venerable old symphony. Giving the orchestra something it hasn’t had in decades: a recognizable face – with the confident persona of a young man with a bold ambition to take the city’s symphony to exciting new heights.

Abrams certainly seems to have the energy – diving into a dizzying two-week spree of media interviews and public appearances. Saturday he leads the Louisville Orchestra in its annual season-opening Fanfara at Whitney Hall, with a party for patrons following.  Monday he’ll conduct the Youth Performing Arts School (YPAS) Orchestra in a rehearsal of works by Bach and Tchaikovsky. Tuesday night Abrams appears in the downstairs music room at Decca, tickling the ivories and talking with patrons in a Greenwich Village club atmosphere. That right there marks Abrams as a new kind of conductor, with more of a connection to his own age group.

Then it’s on to a string of guest appearances at various Louisville restaurants, mingling with diners. Next Saturday he’ll present a trophy in the winners circle at Churchill Downs. Sprinkled in are meet-and-greet cocktail parties at the homes of wealthy orchestra patrons. (What? You haven’t been invited? Must be a mistake.) Finally, on Sunday, Sept. 14, Abrams and company cap the publicity binge with a free Louisville Orchestra concert at the Iroquois Amphitheater.

Whew! A hectic schedule, plus rehearsals with the orchestra. But apparently no sweat for Abrams, who, at 27, is now the youngest music director of a major American symphony. And a guy thrilled to be tilting in the whirl. “I’m going all in with my commitment to Louisville,” says Abrams. “Both the orchestra and the city.”

Abrams represents quite a coup for the Louisville Orchestra – especially for an organization that just two seasons ago ran dead out of cash and fell into a bitter contractual dispute with its musicians. Management declared bankruptcy and the orchestra fell silent for an entire season.

But even more quickly than it had fallen into financial disarray, the orchestra found friends who helped it rebound. A year ago, the orchestra staged a solid comeback – armed with a new financial plan, a new board of directors, a new CEO, an upsurge in ticket sales, and new hopes – capped by the success of its search committee in locating and landing a hot-prospect young conductor. Abrams, a Bay Area California native, is a protégé of San Francisco Symphony conductor Michael Tilson Thomas. He most recently served as an assistant conductor with Leonard Slatkin and the Detroit Symphony. That’s a nice pedigree.

Even more promising is Abrams’ commitment to his new city, beginning by living in Louisville. At first glance, that might seem like a given. Works here, he surely would live here. But that’s not always the case. Many past Louisville Orchestra conductors have lived elsewhere, leading other symphonies, in addition to Louisville’s. Uri Segal lived in Israel, flying in to conduct major concerts. Jorge Mester — who returned to the Louisville Orchestra four years ago in a gracious gesture to help the group keep making music as it fought its financial problems — lives in Pasadena, California, where he leads the Pasadena Symphony. This time, the Louisville Orchestra search committee made it a must that the conductor live in Louisville. And Abrams sees it as a must, as well. He’s already landed in new digs in Louisville’s downtown NuLu neighborhood.

Which means the city will actually get a look in real life at its new orchestra director. Classical fans might respect the artistry of a fly-in conductor, but they’ll definitely dig seeing Teddy Abrams out and about – at an Actors Theatre opening, a University of Louisville basketball game, or mingling with stars on Derby Day at Churchill Downs. That’s in the same way they enjoy seeing Rick Pitino or Calvin Borel or Jennifer Lawrence, when she’s in town. And the reflected glow of the conductor’s celebrity should shine further upon the orchestra’s musical artists.

Abrams touched on all of this when he accepted the Louisville Orchestra job last winter.

“You have to have to have a civic mind, and an artistic mind — you’re doing both, all the time,” says Abrams. “This country has always needed music directors who are both visionary, and leaders, and you find that in a long line of great music directors: my colleague in the Detroit Symphony, Leonard Slatkin; my very dear friend and mentor Michael Tilson Thomas; and his mentor, Leonard Bernstein.”

Away from the limelight it seems quietly significant that Abrams has scheduled workshop time with the YPAS orchestra. The natural audience of professional symphonies is maturing adults who played the music when they were in school. (Like this writer, for example.) It’s also interesting that the Louisville Orchestra has hired Jason Seber, the Louisville Youth Orchestra director, as an assistant conductor.

On another level, one imagines that if the chemistry clicks, the young conductor will attract budding young star players to his orchestra. Artists who also fit into a community’s cultural life. If the chemistry really clicks, one would imagine bigger national orchestras would come courting Abrams. But so what? New prospects would be lining up to follow Abrams to the Louisville Orchestra podium.

Of course, after all the introductions are made, and smiles exchanged, Abrams must bring his baton down upon a superior musical experience. He has a nice starting point for that with a veteran symphony that already plays well. (Though it could benefit greatly from a revenue burst to add more strings.) Abrams’ challenge will be to bring a 19th Century art form that thrived in the 20th Century, into the 21st Century. A part of that challenge is to find new music to play that audiences wish to hear. It says here there’s been very little music written in recent times that people actually enjoy. Too many atonal squeaks and off-rhythm grunts. But today’s music schools are producing terrific musicians, so maybe a new raft of symphonic composers could be on the way, as well. Who knows?

A look ahead to this year’s subscription concerts finds enough of the traditional repertoire to satisfy seasoned concertgoers, with a fair ration of new music added. Mahler’s “Symphony No. 1” anchors Fanfara with a new piece composed by Abrams titled “Overture in Sonata Form.”

Next up, on Sept. 25 and 26, the orchestra performs music of 20th Century composers Richard Rodgers, Aaron Copland and George Gershwin – with soprano Storm Large, a pop singing talent, taking center stage in a symphonic setting. It’s Abrams expanding the orchestral horizon, in the same way such classical stars as cellist Yo Yo Ma and violinist Joshua Bell have been attempting.

Traditionalists will look forward to classical works programmed for later in the season. But it’s a fair bet that all eyes will be on Teddy Abrams —  with ears tuned for the sound the symphony may create as the Louisville Orchestra enters a new era.