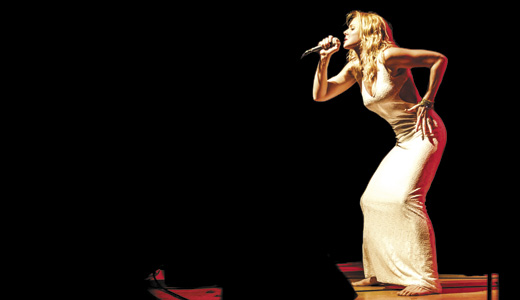 Storm Large … now, what is she? Rock ‘n’ roll star? Pop star? Sang her big hit in a meadow? Performed at Carnegie Hall with a symphony? Sang it off against other vocal contestants on a TV reality show? Wrote a book?

Well, Storm Large appears to be every bit, and all of those things — a cat’s meow musical star-of-all-trades who appears Thursday and Friday with the Louisville Orchestra, singing Kurt Weill’s “The Seven Deadly Sins.” Serious music.

But before the Portland-based singer strides onto the Whitney Hall stage to sing with the symphony, she’ll be getting out and about town tonight (Wednesday) with Louisville Orchestra music director Teddy Abrams — singing at the Bard’s Town, taking requests and chatting from the stage with Louisville night-lifers.

LEO: Hopping around town, singing in clubs sounds more like fun than work.

Storm Large: That’s the plan! Teddy’s a wonderful cabaret pianist. And I’m excited to see what he’s going to come up with. I think I’m also going to do a whiskey tour while I’m in Louisville and go horseback riding. I’m looking forward to all of it. I love Kentucky.

LEO: Your resume certainly has a lot of interesting chapters. You’re youthful, yet you seem to have sung every kind of music, in every kind of venue. Did you just start out being versatile?

SL: Oh, I think it’s because I’ve been independent for so long. When I was a kid and I started out performing in bands, I wanted to be in a rock band that toured and made albums, and we would be in a band forever. Forever. The same band, touring and doing it that way. And that never happened. I never got a record deal. Never got signed. So if you’re an artist, you kind of have to do a lot of different things in order for that to be your career. I sang a lot of demos for people. Singing music you don’t necessarily get into — but you get paid. I sang a lot of commercials, I sang a lot of soundtrack stuff and wrote things for people. You just kind of say Yes to things. For example, 10 years ago, if you said I would be performing with symphonies, I would be performing this rigid German piece, I’d have said, “Wow. That’s weird. Maybe, who knows?”

LEO: That’s pretty cool to sing with the Detroit Symphony in Carnegie Hall, and I’m guessing that’s where you met Teddy Abrams, when he was assistant conductor there with Leonard Slatkin?

SL: It was, and I’ve worked with Teddy since … the Britt summer festival, in Oregon. He’s terrific.

LEO: But this Carnegie Hall gig with “Seven Deadly Sins” must have been … ?

SL: Yeah, I was really scared when I was first asked to perform Kurt Weill, because I didn’t immediately relate to the music. But my home conductor with the Oregon Symphony, Carlos Kalmar, assured me I could do it. I’ve worked with him before, and I think he knows me better than I do. He says, “Yes, you can do it. Yes, you’ll be fine.”

LEO: You just laughed, so I guess you’re happy with it?

SL: It’s a little serious. It gets a little crazy. Dark humor. A little cynical. Bertolt Brecht despised capitalism. Despised America — anything that had to do with it. Yet, at the same time he was perversely attracted to American culture. So you can sort of see that in Anna — how a woman would make her way throughout America. Naturally, she would be a whore. And that’s kind of the metaphor for Anna, and her journey for seven years through the United States.

LEO: That’s a long way from a TV reality show, and songs like “Gone” and “Eight Miles Wide.”

SL: I have always kind of said yes to everything, especially if it’s kind of challenging. Pushing myself. I like to think I’m kind of fearless with art and music.

LEO: Was there one thing that really propelled you — one of those chances to be fearless?

SL: There is no one thing; there’s a bunch of different things. Like, I was on television about eight years ago doing a reality show — but that was about rock music. Hard rock music. I did my hard rock thing. That was fun, and it increased my popularity. But it depicted me as a rock ‘n’ roll singer. And I’m obviously more than that. Another thing, I wrote a play, called “Crazy Enough,” that I wrote and starred in. A one-woman show. And a ton of famous people heard about it and came to see it. It got all kinds of attention and excitement — including the attention of Simon and Schuster, who asked me to write a book. In fact, they hounded me, they begged me to write the book. (She laughs.) And so I finally wrote the book, and it was the Oprah Book of the Week. So that was another thing. And performing at Carnegie Hall.

There’s a saying in music that I would love to change people’s perspective on: “making it.” Quote, end quote — making it. You’re never, ever going to make “it” because “it” keeps changing. Little things along the way are like, “Holy shit, this is fantastic!” But you’re not going to stop there. You continue to make it. It’s an active pursuit. I like to think I’m constantly making it.