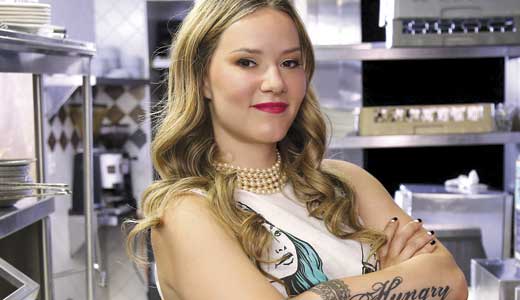 “Louisville,” an episode of “Bite This with Nadia G” premieres Thursday, Sept. 4, at 9 p.m. ET on the Cooking Channel.

The Cooking Channel’s Nadia G recently filmed an episode of her show “Bite This” here in Louisville. It premieres Thursday, Sept. 4, and the promo blurb I got before she and I had the pleasure of talking sums up her visit like this: “The first stop is Milkwood for smoked pork shoulder with an Asian-inspired black BBQ sauce. Then, Nadia heads to Harvest to try a Kentucky Burgoo – a meaty stew traditionally made with squirrel. Finally, Nadia shkoffs spaetzle with a southern twist at Eiderdown.

I read “Milkwood” (no surprise), “Harvest … burgoo” and … SQUIRREL! Boy, the “squirrel” got my dander up. Why is it whenever our great state makes the national scene it has to be in some Turtlemanesque-varmit-eatin’ kinda way? Sure, we’ve got bourbon and the Derby, but nothing says, “Happy Birthday, Uncle Daddy,” quite like munchin’ on skinny ass rodents.

After reading the episode description, I had to know more about Nadia G, so I did a little research and found out she’s a first generation Italian Canadian from Montreal. I was pondering all this while walking to the Wine Rack for a bottle of Sauv Blanc and was thinking, what if I were doing a big show, stopped in Montreal and wanted to discuss their food scene in the context of french fries covered in gravy and cheese curds. Along my way down Frankfort Avenue to get my wine, I passed the newly opened Craft House, paused to scan their posted menu and noted that not only is burgoo listed, but so is poutine!

I haven’t thought of burgoo in a long time, and if I were to cover Kentucky food for the world to see, burgoo might be pretty far down on the list. Yet, here were burgoo and poutine together and, Son, it feels so right!

LEO: When were you in Louisville?

Nadia Giosia: I was in Louisville about a month ago.

LEO: I love how you say Louisville, with the ‘Louis’ emphasized.

NG: Our scantily clad food correspondent Hans, who delivers all our nutrition reports, has a very strange way of speaking and doesn’t really pronounce stuff properly, so we had him do a whole bit about how he is happy that in Louisville he could just like, lose some of those vowels.

LEO: Burgoo and poutine … who comes up with this stuff?

NG: You know, whenever I travel someplace, I always like to taste a little bit of the local culinary tradition. Man, I will tell you, it was the best stew I’ve ever had in my life, hands down. Colby [Lee Ming] is an exceptional chef, and what was so nice is that not only is she ridiculously talented in the kitchen, but she was also one of the first chefs on “Bite This” to have boobs! And I’m not talking man boobs. This industry is dominated by a lot of men and it was great to finally eat something made by a female chef. That burgoo, I still dream about it; she uses all confit meats. The broths that are made in-house are so flavorful and intense. One thing that really impressed me about Kentucky was that around the country there is a big farm-to-table movement but it often is just a trendy thing, but where you guys are at it truly is a lifestyle, and I was just so, so happy about that and obviously my taste buds were very happy too because it can’t be beat when you get the stuff that is locally sourced.

LEO: We have Italian ancestry in common. Growing up I didn’t really appreciate it while it was happening but I was learning a lot about food.

NG: My family emigrated from Italy to Montreal. I’m first generation Italian/Canadian. They were a very food-obsessed family, and they did a lot of yelling. Eating and yelling, that was their specialty. They come from these broke ass towns that barely had any electricity, never mind the TV, so they have to create their own drama. You can’t blame them.

LEO: What was your guilty pleasure while you were here in Louisville?

NG: I ended up buying this really beautiful floral headpiece at this cute little shop with lots of artisan stuff. I really had a nice time in Kentucky, from the art that was available to the food. Super cool. We had some tacos at Taco Punk. That was a very interesting lunch; the tacos were great. I mean, I live in Los Angeles, so I have access to a lot of fantastic Mexican food and these tacos were definitely up there. The ambiance was great. How can you go wrong? Punk tacos?

LEO: What about ‘Rock this look’ Louisville?

NG: Yeah, that is definitely coming up when the episode airs. There are some great outfits in Louisville. We always, you know, bring good outfits to the table.

LEO: Do you drink bourbon?

NG: I love bourbon, LOVE bourbon! I didn’t get a chance to taste that many fancy bourbons, but I’m like a Four Roses girl. I think it’s a great quality bourbon for your buck and I’m a huge fan.

NG: Naw, I did not go to culinary school nor work in restaurants. I just grew up cooking an eating a lot of great food and home style cooking is something that has been near and dear to me for a while and I’ve been lucky enough to share those recipes with some folks. I was doing sketch comedy in early 2000, always loved to cook, never considered it a career. Finally one day I decided to meld those two passions, cooking and comedy and came up with “Bitchin’ Kitchen” and now “Bite This,” which is a very fun show. Yes, we go to the restaurants and taste some really fantastic food, and the chefs share the recipes with us but more importantly we have some fun and catch them off guard. That’s what I find cool; we never get to see the personalities of the chefs in these shows. Usually it’s just dump and serve and there you have it, your dish and some sweaty person starts stuffing their face with it. With us, you kinda get to know the chefs’ personalities which adds that much more flavor to the food that we’ll be stuffing our face-holes with.

LEO: I understand Milkwood is one of the local places in your upcoming episode. I’m not the first to notice that Korean cuisine is pretty soulful and southern. Spicy pigs and cabbage with BBQ sauce.

NG: Living in L.A., I eat a lot of Korean food and a lot of Korean barbecue and the South knows a little something about barbecue too, so melding those two talents created an exquisite dish at Milkwood. I had the pork shoulder with an Asian-inspired barbecue sauce, very good! Really nice to work with chef Kevin Ashworth, the young gun. He started at a very young age, a prodigy.

LEO: At the other end of the spectrum you also visited Eiderdown.

NG: We did go to Eiderdown; that was also interesting because Brian Morgan is doing European/Southern fusion, so wow! I had spaetzle and again, the prominent flavor is the local ingredients. Local cheese. Also realizing how easy it is to make, basically flour and water; he puts it through a colander, drips it through into boiling water, and boom, spatzel is made. A pretty cool process. Then sautéed them with a bit of butter for this nice crisp golden exterior with the tender noodle on the inside. It was so good.

LEO: Next time you hit the ‘ville, what’s on your radar?

NG: What I’m curious about is the night life, which I didn’t get a chance to experience, because I have to be up shooting at 6 a.m. The last thing I need is a hangover, but in general I’m a big fan of blackouts. Sadly I haven’t had the opportunity to get kicked out of a bar in Louisville. The next time I’m there, that’s my goal.

NG: Get promoted, develop other projects, get some downtime. That’s what’s interesting about this industry; it’s like “go, go, go crazy 14-hour days for months on end then you are off for a couple months. That’s the payoff I guess.

Before we concluded our conversation, I just had to disclose to Nadia that despite living most of my life eating, cooking and talking about food in Kentucky, I’d never had burgoo made with squirrel or any other varmit. She concedes it might be mostly history and lore. Nonetheless, the “Bite This” “Louisville” episode will air Thursday, Sept. 4, at 9 p.m. and that makes Nadia “very fucking happy!”