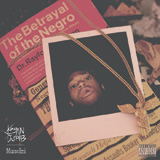 A quick and dirty short-player, the Bird Zoo alum’s “Mussolini” EP feels infinitely longer than its quarter of an hour. Multiple listens are an effort, as these bleak, joyless tracks plod without energy, seemingly boring the artist in his own delivery. Even Mr. Goodbar of Skyscraper Stereo can’t save the proceedings, as his verse on “CRWN” comes in long after your ears have stopped giving a damn. The tracks and kogandumb’s delivery have no color, no variety to them, each song and interlude bleeding into the next. Kogandumb is one of the more prolific emcees in the city, for better and for worse, so disliking this release is about as lasting as eating bad Chinese food — forgotten in the short term, and you’ll be wanting more soon enough. He’s probably halfway finished with his next album, and we’re still eager to listen.