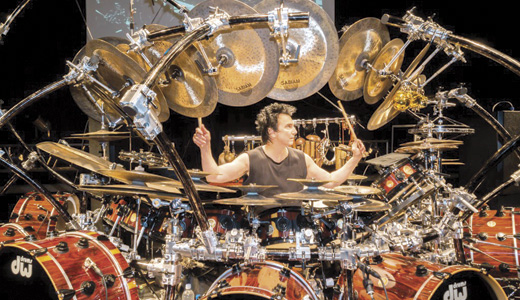 What entails an evening with Terry Bozzio? A multiplicity of beats, rhythms and time, for one. The famed drummer has done it all, performing with names like Jeff Beck, Mike Patton and Korn. He’s most noted for playing on a number of albums with Frank Zappa and being a creative force in the new wave group Missing Persons. Following an extensive run through Japan and Europe, he brings his melodic solo drums concept to America.

His drum kit is a functional, sculptural statement featuring eight bass drums, 22 pedals, and an assortment of percussion and unconventional sound-makers. A lover of architecture and design, Bozzio has patented many additions to his kit, which is called “the world’s largest tuned drum and percussion set” on his website. Despite speculations, the massive set takes only minutes to set up. The real challenge, Bozzio says, is working with the acoustics of a room.

“Everything is there for a reason,” he said on the phone with LEO. “I try to squeeze all kinds of little sounds into what I am physically capable of reaching and playing comfortably. So I can turn three different ways: I can face the front, I can face the right or I can face the left. And there’s enough tangible things to hit on each side that can make the composition specific to each one of those areas.”

As a melodic drummer, he emphasizes composition. His typical set features structural and improvised tunes under a repeated ostinato figure. “Some of them have a melody or two at the beginning or end, but the rest of them are open and I improvise in a compositional manner. It’s a one-time, unique, authentic musical experience. Never will be repeated in the same way.”

The stage show also features two large panels of Bozzio’s sketches. Naturally, the art mirrors his movements on the kit. His latest art collection, “Rhythm + Sketch,” illustrates that chaos through slow-exposure photographs, accomplished by playing in a dark room with electronically lit drumsticks of different colors. The result is a colorful expression of rhythm stopped in motion — a pattern in time. Bozzio then sketches over select images, adding bold lines and shapes.

“I’ve been sketching since 1975. My first tour with Zappa had Captain Beefheart in it, and he encouraged me to start sketching,” Bozzio said. “I did and have been ever since.”

This year marks the 50th anniversary of his first drum lesson. Before that he built his own makeshift drum kits using sticks and broken arrows from an archery set, affixing metal signs taken from telephone poles to use as hi-hats. Bozzio’s father, an accordion player, at first did not want his son to pursue music.

“He denied me drumming all through my childhood, right up until the time when he finally broke down and gave me the lessons. He always wanted me to get a degree in marine biology instead of music.”

Bozzio went on to say his music ability came inherently through his father.

“He’d play a few chords and just look down at the keyboard and go off into his own world. People would cry, he played so well. And I saw that power of him, able to draw people inside and share that. I think I learned that from my father; I envied the way he did that. And somehow, here I am now 63, and admitting — not in  an egotistical way but in a humbling way — that I seem to have inherited that from him. I can take people inside, tell them a story and basically feel like they’ve been time traveling after they see my show.”

Bozzio said he’s always taken a transcendental approach to music since he started to practice meditation.

“I’m always dipping into the subconscious, pulling out something that surprises me. It really is kind of a channeling event, and every musician will tell you that way is ‘in the zone’ playing, when some amazing shit happens. I wish that it happened every night and you could control it, but you can’t. We can attempt and risk — you’re not gonna die of it.”

Bozzio wants to continue down that unexplored path, which means no more clinics for a while.

“I have laid out pretty much everything,” he said. “So now it’s up to anybody who wants to take it upon themselves to do the work, to encompass what it is that I talk about. I can’t do the work for them. But I can tell you how I did, step by step.”

Bozzio is full of ideas and shows no signs of slowing down. He is humbled to share his solo performance with the world.

“The big goal of any artist is to look inside, find the beautiful and share it with others. That’s been my mode of operation for many years now. As long as I can survive, I’m really happy. I’m not a rich man, but I am a very fulfilled man having my output seen and heard.”